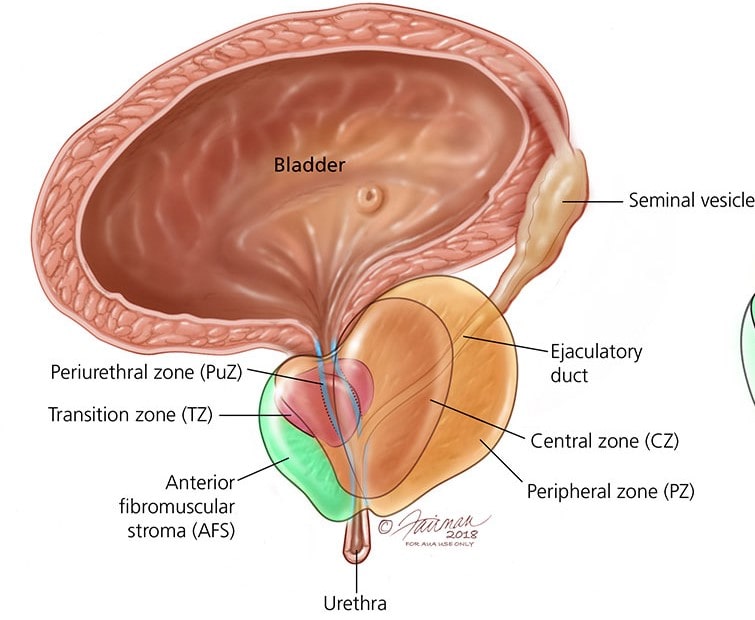 The prostate is a conical, fibro-muscular-glandular organ that surrounds the proximal part of the male urethra. Its female homolog is paraurethral glands (of Skene).

The prostate is located in the lesser pelvis below the neck of the urinary bladder and above the urogenital diaphragm.

1. True capsule: It is formed by the condensation of the peripheral fibrous stroma of the gland.

2. Fale Capsule: It is derived from the visceral layer of pelvic fascia. It is outside the true capsule & envelops the prostate & urinary bladder in the same compartment.

Apex: It is directed downward & rests on the superior surface of the urogenital diaphragm.

Base: It is directed upward & surrounds the neck of the urinary bladder.

Anterior Surface: It is situated 2 cm behind the pubis symphysis & separated from symphysis by the retropubic space (of Retzius).

Posterior Surface: It is broad and flat and lies in front of the ampulla of the rectum.

Two inferolateral surfaces: These are related to the anterior fibers of the levator ani.

The posterior surface is divided into small upper & larger lower areas by a transverse sulcus. The upper area represents the median lobe and the lower area is divided by a median sulcus into two lateral lobes.

From outside to inwards-

Structure within the Prostate:

The prostate gland is supplied by the branches of the inferior vesical, middle rectal, and internal pudendal arteries.

The veins form the prostatic venous plexus around the sides & base of the gland & occupy the space between true & false capsules. It receives the deep dorsal vein of the penis in front & is continuous above with vesical venous plexus.

Parenchyma: It develops in the third month of intrauterine life (IUL) as a series of endodermal buds (outgrowths) from the lining of primitive urethra & an adjoining portion of the urogenital sinus.

Stroma: It develops in the 4th month of IUL from surrounding mesenchyme derived from the splanchnic layer of mesoderm.

After 50 years of age, the prostate is enlarged due to hypertrophy forming an adenoma. The BPH commonly involves the median lobe.

The surgical removal of adenoma is called a prostatectomy.

It usually occurs after the age of 50 years. The carcinoma is commonly found in the outer (peripheral) zone which usually involves the posterior lobe.

Clinically, it presents as :