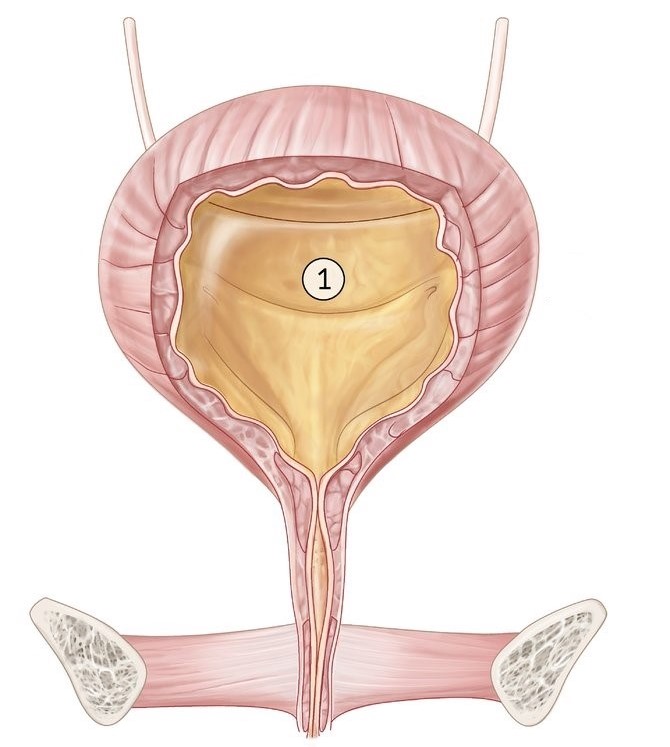 Ureters are a pair of thick-walled cylindrical tubes which convey urine from the corresponding kidney to the urinary bladder.

Course: It consists of three parts-

The ureter begins within the renal sinus as a funnel-shaped dilatation, called the renal pelvis. The pelvis passes downwards and medially through the ureter hilum and is continuous with the abdominal part at the level of the lower end of the corresponding kidney.

It passes downwards and slightly medially beneath the peritoneum of the posterior abdominal wall and enters the pelvic cavity by crossing either the bifurcation of the common iliac artery or the beginning of the external iliac artery.

At first, the ureter passes downwards beneath the peritoneum of the lateral pelvic wall, along the anterior margin of the greater sciatic notch, and reaches the level of the ischial spine. This is known as the first or vertical part of the ureter.

From the ischial spine, the ureter passes forwards and medially through the extra-peritoneal tissue above the levator ani muscle and reaches the superolateral angle of the base of the urinary bladder at a distance of about 5 cm. from the opposite ureter. This is known as the second or oblique part of the ureter.

Finally, the ureter pierces the musculature of the bladder, undergoes an oblique sub-mucosal course downwards and medially through the bladder wall, and opens into the interior of the latter. This is known as the third or intra vesical part of the ureter which is about 2 cm long.

The ureter is slightly constricted at three places-

Prostatic Part: Passes through the anterior part of the prostate. It is the widest and most dilatable of the male urethra.

Spongy or penile part: Passes through the corpus spongiosum of penis.

Structure of urethra: Urethra presents 3 coats from outside inwards:

Internal sphincter or sphincter vesicae: It is involuntary and surrounds the internal urethral orifice.

External or sphincter urethrae: It is voluntary and surrounds the membranous urethra.

Most of the urethra is supplied by autonomic nerves and the terminal parts by somatic nerves.

The female urethra is about 4 cm long and 6mm in width.

It begins at the internal urethral orifice at the neck of the bladder and passes downward and forward embedded in the anterior wall of the vagina through the urogenital diagram.

It develops from the vesicourethral part of the endodermal cloaca.

Glands and lacunae around the female urethra:

These are the small tubular gland and surround the entire urethra.

These are the relatively large mucous glands and aggregated on each side of the upper part of the urethra.

Para urethral glands are homologous to the male prostate.

There are pit-like mucous recesses along the entire urethra. The female urethra is short in length and easily dilatable hence catheters can be easily negotiated as compared to the male.

Urinary incontinence is common in females because in females external urethral sphincter is a tenuous structure and further weakness during childbirth.