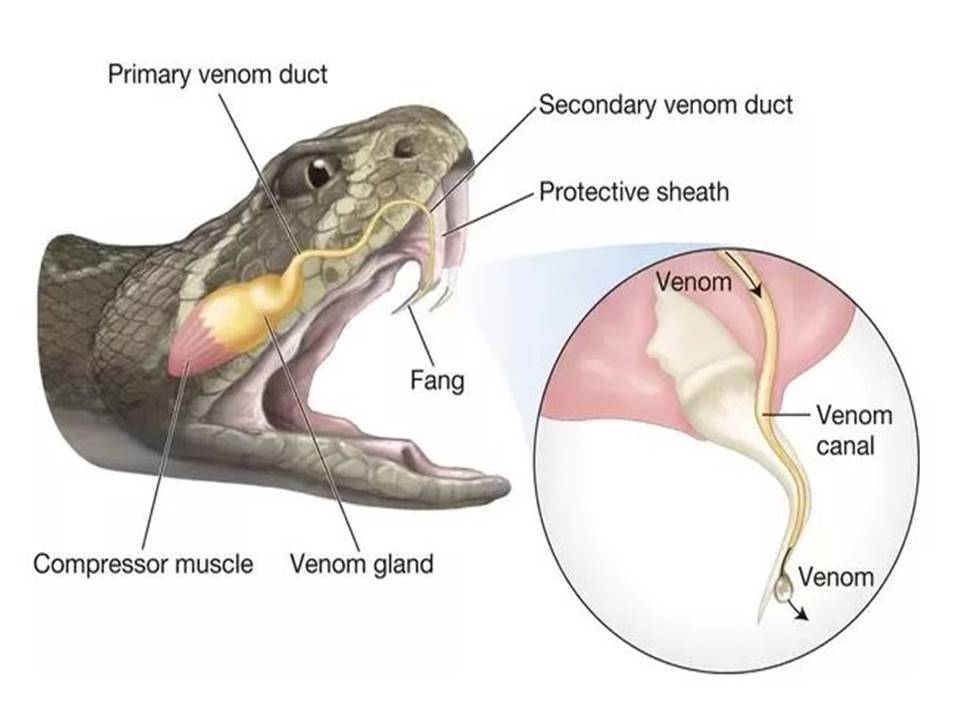 Poison Glands:
They are the salivary glands of the snake and are situated behind the eyes, one on each side of the head above the upper jaw.

FANGS:
All the poisonous snakes have two fangs. These are curved teeth situated on the maxillary bones and lie along the jaws, and are covered by a flap of mucous membrane.

Venom is the saliva of the snake.

Cobra venom is faint transparent yellow and is slightly viscous. When exposed to sun, it becomes slightly turbid. Russell's viper venom is white or yellow.

Venom is secreted by special glands near the upper jaw of the snakes which are akin to human parotid glands. During the process of bite, the glands are pressed and the venom is squeezed and channelled through the grooves or channels of the fangs.

It is basically a mixture of toxalbumins and enzymes in varying proportions. The enzymatic components cause local and systemic effects and the non-enzymatic compounds provide lethality .

Ophitoxaemia is poisoning by snake venom.

The most common symptom following a snake bite (poisonous or non-poisonous) is fright, especially the fear of rapid and unpleasant death.

Due to fright, the victim may become semiconscious with cold clammy skin, hypotension, feeble pulse, and rapid breathing. These emotional symptoms appear within a few minutes of the bite. Sometimes, it produces psychological shock and even death. It may also give rise to tetanus or gas gangrene. 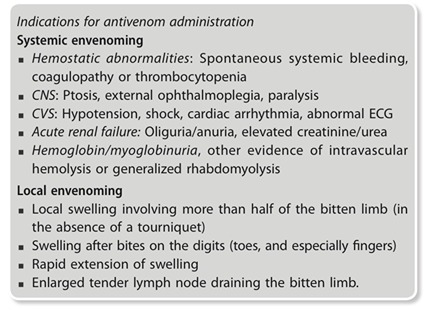 Difference between poisonous and non-poisonous snakes

Difference between cobra and viper 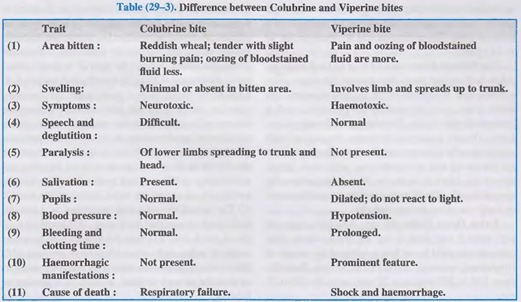 It is useful when given within four hours of the bite. It is of less value if delayed for eight hours, and is of doubtful value after twenty-four hours. Each vial of PAV will neutralize about 6 to 8 mg of venom.

Few ml. of fresh venous blood is put in a clean dry glass tube and left undisturbed for 20 minutes and then gently tilted. If the blood is still liquid, it indicates a viper bite. This test is repeated every 6 hours for determining the repeat dose requirement. Normalization of clotting time is taken as the endpoint of therapy. After that, the test is done at 12-hour intervals for at least 48 hours to detect recurring envenoming. Repeat dosing is required for recurrence of systemic signs.

2) Apply firm pressure over the bitten area, which delays the absorption of venom.

3) Pressure immobilization is recommended for elapid and sea-snake bites, but not for viper bites as it may cause local necrosis.

Immediately apply a broad firm bandage on the bitten area and around the limb. As much of the limb should be bandaged as is possible. It should be tight enough to occlude the superficial venous and lymphatic return, but not the arterial or deep venous flow.

4) Immobilize the limb, as movement can accelerate the spread of venom. Avoid elevation of an extremity, as it may hasten systemic absorption of venom.

5) Local incision and suction should not be done as it can cause local bleeding and nerve injury.

6) Do not suck the venom out of the wound, and do not use chemicals or medicines on the wound.

7) Clean the wound with soap and water, or iodine and cover with a sterile dressing.

8) Make the patient lie on one side in the recovery position so that the airway is clear, in case of vomiting or fainting. 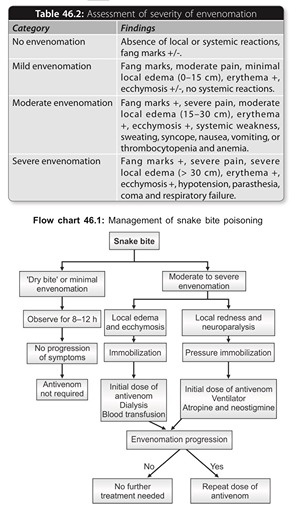 Snake venom is poisonous only when injected, and is harmless when taken by the mouth, as it will be digested by enzymes in the intestinal tract and absorbed as amino acids. It is excreted by kidneys, milk, and probably by salivary glands and the mucous membranes.

The Circumstances of Poisoning:

(1) Poisoning is as a rule accidental.

(2) Occasionally, a murder is committed by throwing a poisonous snake on the bed of a sleeping person.

(3) It is very rarely used for suicide.

Bite site might be swollen, redness, or hemolyzed blood stain

Washing from the bite area may contain cholinesterase or thromboplastin.

Acute renal failure is the leading cause of death in viper bite.

Hemorrhages into the bowel, purpuric spots on the pericardium, and hemorrhages in the lungs and in many tissues may be seen. 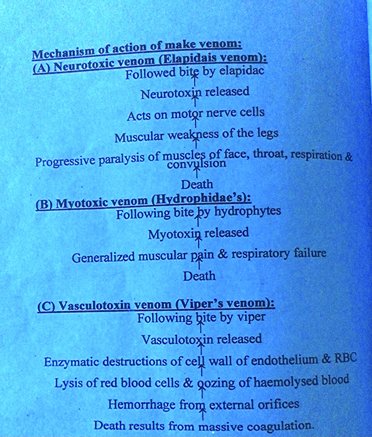