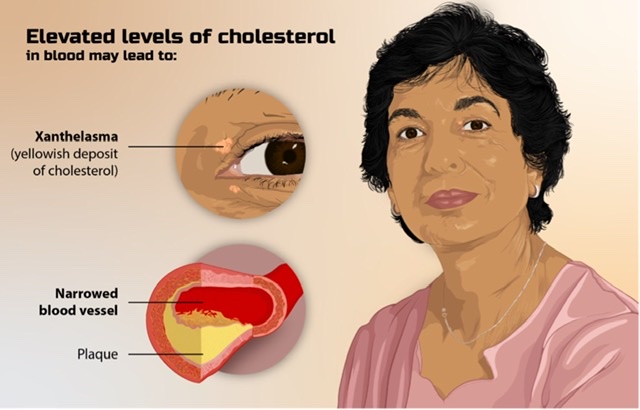 Q.1 What are lipids?

Lipids are ester-like compounds of fatty acids that are insoluble in water but are soluble in fat solvents.

Q.2 Give the classification of lipids.

Lipids are classified into:

Q.3 What is the biological importance of lipids in the body?

Fats are the esters of fatty acids with glycerol.

Q.5 What is the difference between fat and oil?

Q.6 What are saturated fatty acids? Give examples.

Q.7 What are unsaturated fatty acids? What are the types?

– Polyunsaturated (polyethenoids): containing more than one double bond in their structure.

Q.8 Give an example of monosaturated FA (monoethenoid) found in our body fat.

Q.10 What are the saturated fatty acids most abundant in fats?

Q.11 What are essential fatty acids?

Essential fatty acids are those which cannot be synthesized by the body and hence are supplied in the diet. They are also called ‘polyunsaturated acids’.

Q.12 What are the functions of essential fatty acids?

Q.13 Which EFA is important?

Q.14 What is saponification?

Hydrolysis of fat by alkali is called saponifications.

Q.15 What is the saponification number?

Saponification number is defined as the mg of KOH required to saponify 1 gm of fat.

Q.16 What does the saponification number of fat indicates?

Q.17 What is iodine number?
Iodine number is defined as the gms of iodine absorbed by 100 gm of the fat.

Q.18 What does the iodine number indicate?

The amount of KOH in mgs required to neutralize free fatty acids presents in 1 gm of fat.

Q.20 Which will have a higher acid number, a pure fat or rancid fat?

A rancid fat will have a higher acid number.

Glycerol is commonly called as glycerine. Chemically it is trihydric alcohol containing three -OH groups in the molecule.

Q.22 What are the sources of glycerol in the body?

Sources of glycerol in the body:

Q.23 What is acrolein test?

The presence of glycerol in a compound is detected by the acrolein test. Glycerol, when heated with KHSO4, two molecules of water are removed and it produces acryl aldehyde which has a characteristic pungent or acrid odor.

Q.24 Is glycerol produced in the body by lipolysis a waste product or useful?

Glycerol produced in the body is not a waste product. It is useful in that:

Q.25 Can glycerol be used clinically in medicine?

Glycerol has been used orally or IV in cases of cerebrovascular diseases. It is nontoxic and it reduces cerebral edema with improvement in CS fluid. There is no rebound increase in intracranial pressure on discontinuation of therapy.

Rancidity is a chemical resulting in the unpleasant odor and taste in the fat on storage when they are exposed to light, heat, and moisture.

Q.27 What are antioxidants?

Antioxidants are substances that prevent rancidity.

Q.28 Give the classification of antioxidants?

Q.30 What are phospholipids?

Phospholipids are compound lipids that contain in addition to fatty acids, and glycerol/or other alcohol, a phosphoric acid residue, a nitrogen-containing base, and other constituents.

Q.31 State how phospholipids are classified?

As per Celmer and Cartar’s classification phospholipids are classified into 3 groups:

Q.32 What are phospholipases? What are the types? Mention their site of action.

Phospholipases are enzymes which hydrolyze phospholipid in a characteristic way. Five types described. Their specific site of action on lecithin are as follows:

Q.33 What is sphingomyelin?

It is a phospholipid. It does not contain glycerol, instead contains an 18 carbon unsaturated amino alcohol called as sphingosine (sphingol).

Q.34 What are plasmalogens? How does it differ from lecithin/cephalin?

Plasmalogens are phospholipids. They are predominantly found in the brain and nervous tissue

Q.35 What is cardiolipin?

It is a phospholipid found in the mitochondrial inner membrane. Chemically, it is diphosphatidyl glycerol and is formed from phosphatidyl choline.

Q.36 What is dipalmitoyl lecithin (DPL)? What is its clinical importance?

Q.37 What are glycolipids? Give examples.

Glycolipids are lipids that contain carbohydrate moiety in their molecule.

They are mainly of 2 types:
– Cerebrosides, and
– Gangliosides.

Q.38 What are cerebrosides?

Cerebrosides are glycolipids. A cerebroside is built as follows:

Q.39 What are the different types of cerebrosides? How do they differ from each other?

Cerebrosides are mainly 4 types. They differ from each other by the fatty acid content.

Ceramide is formed by esterification of sphingosine with FA of high molecular weight.

Principally found in the white matter of the brain, in myelin sheaths, and medullated nerves.

Q.41 What is the composition of lecithins?

Q.42 What is the composition of cephalins?

Q.43 What is the sugar component present in cerebrosides?

Q.46 Give the structure of cholesterol.

Characteristic features of cholesterol structure are:

Q.48 What are the sources of cholesterol in the body?

Q.49 What are the forms in which cholesterol exists in blood and tissues?

Q.50 How does cholesterol esterified?

Some cholesterol esters are formed in tissues by the transfer of “acyl” groups from acyl-CoA to cholesterol by the enzyme acyl transferase.

Q.51 What are the bad effects of cholesterol?

Excessive cholesterol is harmful to the body in that it gets deposited in arterial walls producing atherosclerosis. This can narrow the lumen of the blood vessel impeding blood flow which can cause thrombosis.

Q.52 Is cholesterol good for the body? What are the good effects?

In normal quantities, cholesterol has a number of good effects.

Q.53 What are the tests by which cholesterol is detected?

Q.54 What is Liebermann-Burchard reaction?

A chloroform solution of cholesterol when treated with acetic anhydride and conc. H2SO4 gives a grass green color (cholestapolyene sulphonic acid is formed). This reaction is utilized in the colorimetric estimation of cholesterol in the blood by Sackett’s method.

When the solution of cholesterol is treated with glacial acetic acid, ferric chloride, and conc H2SO4, it gives purple red color (cholestapolyene carbonium ion). This reaction forms the basis for the colorimetric estimation of cholesterol by Zak’s method.

Q.56 What is 7-dehydrocholesterol? Why it is called pro-vitamin D3?

Ergosterol is a plant sterol.

When it is irradiated with UV rays [long wave 265 μm (millimicron)] it changes to vitamin D2. Over irradiation may produce toxic substances viz. Toxisterols and suprasterols.

Q.58 What are chylomicrons?

Chylomicrons are the central core of triglycerides, phospholipids, and cholesterol combined with a small amount of proteins.

Q.59 What are lipoproteins?

The combination of lipid with proteins are called lipoproteins.

Q.60 What are the various functions of plasma lipoproteins?

Q.61 Which fraction of the lipoprotein contains maximum cholesterol content?

Q.62 LCAT is present on which lipoprotein?

LCAT is present on the HDL molecule. It converts cholesterol and lecithin to cholesteryl ester and lysolecithin respectively.

Q.63 What is the other name for VLDL remnant?

Q.64 LDL receptor can be expressed by another which method?

Q.65 What are apolipoproteins?

The protein component of plasma lipoproteins are called apolipoproteins.

They are sodium and potassium salts of glycocholates and taurocholates.

Q.68 At which step bile acid synthesis is regulated?

Q.69 What do you understand by respiratory distress syndrome?

Deficiency of lung surfactant cause this disease.