parts of the Duodenum (Viva) - Emedicodiary

parts of the Duodenum (Viva) 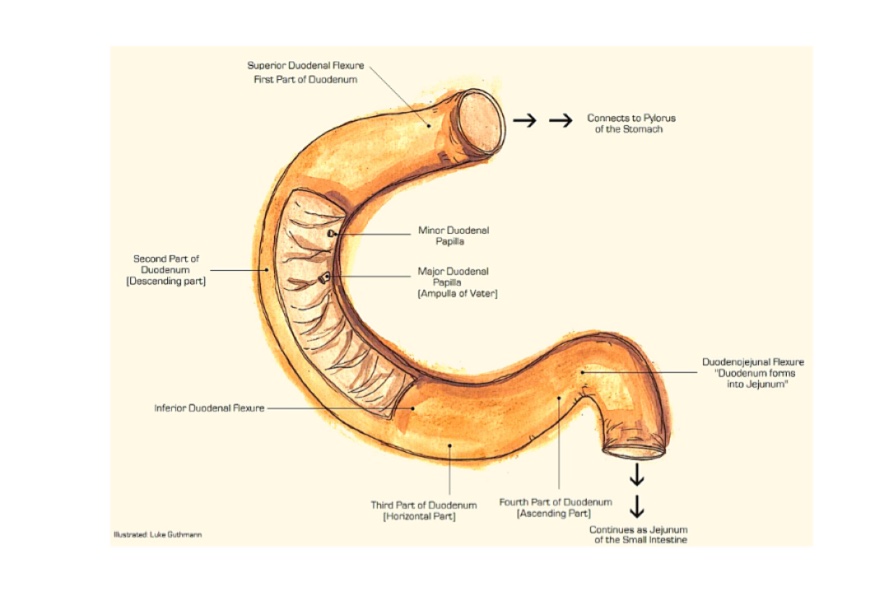 parts of the Duodenum (Viva)

DUODENUM ( parts of the Duodenum )

Q.1 What is the position of the duodenum?

Duodenum lies above the level of umbilicus against L1-3 vertebrae, extending ½ inch to right and 1 inch to the left of the median plane. On either side of the vertebral column, duodenum lies in front of psoas major muscle.

Q.2 What is the length of the duodenum and what are its different parts?

Duodenum is a 10 inch long, curved around the head of the pancreas in form of ‘C.’ It is divided into 4 parts :

Q.3 What are the peritoneal relations of duodenum?

First part:
The proximal 1 inch is suspended by lesser omentum above and greater omentum below, therefore it is moveable.
Distal 1 inch is fixed because it is retroperitoneal and is covered with peritoneum only anteriorly.

Second part: Retroperitoneal and fixed.
Anteriorly crossed by peritoneum except in the middle where it is related to the transverse colon.

Third part: Also retroperitoneal and fixed.
Covered by peritoneum anteriorly except where crossed by superior mesenteric vessels and root of mesentery.

Fourth part: Mostly retroperitoneal.
The terminal part is moveable due to mesentery.

Q.4 What are the relations of the first part of the duodenum?

Inferiorly: Head and neck of the pancreas.

Q.5 What are the relations of the second part of the duodenum?

Q.6 Give relations of the third part of duodenum.

Q.7 Give structures related to the fourth part of duodenum.

To the Right:
• Upper part of root of mesentery and Aorta

To the Left:
• Left kidney and Left ureter.

Q.8 What is peculiar about the development of duodenum?

The duodenum develops partly from foregut and partly from midgut. The junction of the two is in the second part of the duodenum where the common bile duct opens, i.e. major duodenal papilla. 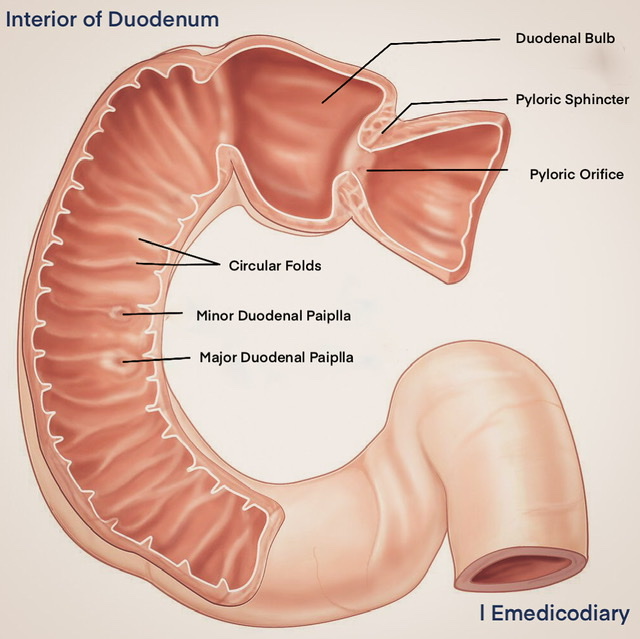 Q.9 What is the blood supply of duodenum?

The first part is also supplied by the right gastric, right gastroepiploic artery, and branches of the renal and hepatic artery.

The veins drain into splenic, superior mesenteric and portal veins.

Q.10 What is the lymphatic drainage of the duodenum?

Q.11 What is ligament of Treitz?

It is a fibromuscular band that supports the duodenojejunal flexure. It arises from the right crus of the diaphragm and is attached below to the posterior surface of flexure and third and four parts of the duodenum.

Q.12 What is typical of the histology of the ligament of Treitz?

It is made up of:

Q.13 What is the importance of the ligament of Treitz?

Q.14 What is ‘Duodenal cap’ and its clinical importance?

Q.15 What is the clinical importance of relations of duodenum?