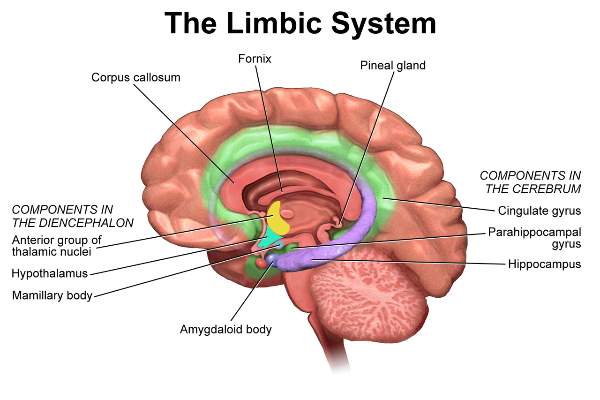 2 years ago 979
Basal Nuclei/ Basal Ganglia:
The basal nuclei are intra-cerebral masses of grey matter situated within the white core of the cerebral hemisphere which forming important parts of the extrapyramidal system.
Components:

Note:
Basal ganglia does not receive any sensory input from the spinal cord.
Without sending fibers to the spinal cord modify the effect on the spinal cord through projection to motor cortex & extra-pyramidal fibers.
They do not initiate movements but are able to adjust the motor commands.
* Basal ganglia sometimes termed as extrapyramidal nuclei as it influences the quality of motor performance.
Connection of Basal Nuclei or Corpus Striatum with other parts
Caudate nucleus & putamen is the main afferent nuclei while globus pallidus is the outflow part (efferent part).
*  Caudate nucleus receives fibers mainly from the cerebral cortex, thalamus & substantia nigra.
*  Globus pallidus sends fibers to the thalamus, subthalamus, substantia nigra, red nucleus.
Main Afferents Fibers:

Disorders of basal nuclei:
Lesion of basal ganglia & cerebellum do not cause paralysis.
*  These produce abnormal movements or unwanted involuntary movements or posture or change in tone.
Hyperkinetic disorders:
Excessive & abnormal movements like chorea, athetosis, ballism
Hypokinetic disorder:
There is a lack of slowness of movements such as Parkinson’s disease.
Parkinson’s disease:
Occur due to Dopamine deficiency in corpus striatum result from the destruction of substantia nigra or lesion in nigrostriate fibers.
Sign-symptoms
L-dopa (a precursor of dopamine) is used as a replacement therapy in Parkinsonism.
Because dopamine, the normal neurotransmitter in the striatum, is reduced in these cases.
The nigrostriate fibers are considered important in the genesis of Parkinsonism tremor, since its neurons utilize dopamine in the neurotransmission.
Chorea:
Means dancing involuntary movements
Limbic system:
The limbic system means entire neural circulation that controls the emotional, behavior & motivational drives.
(Limbus=means ring-shaped)
The limbic lobe is a composite bordering zone between the cerebrum and diencephalon.
*  It is somehow ring-shaped.
* It is associated with basic survival behavioral control system
Constituents of limbic system:

Tips:
Mammilothalamic tract is the bundle of nerve fibers connecting the mammillary body & anterior nucleus of the thalamus.
Function of the limbic system
The main object of the limbic system is to meet the needs of primitive life that is food and sex.
Food is necessary for survival of individual & sex for survival of the species.
Applied anatomy: