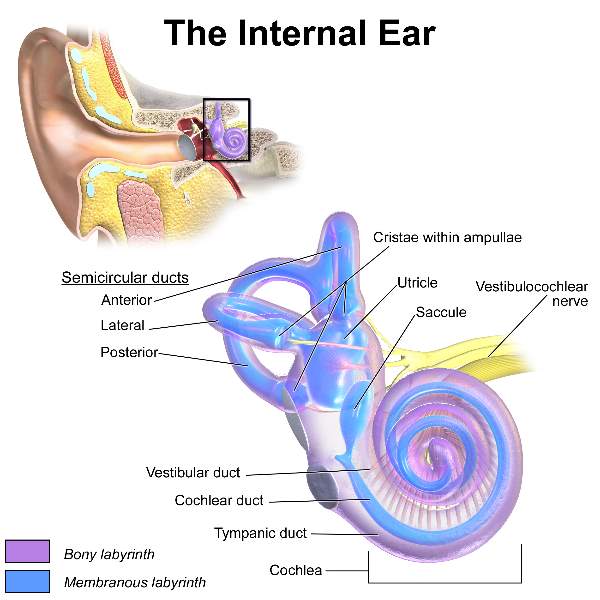 3 years ago 1294
Internal ear
Internal ear composed of the bony labyrinth within which membranous labyrinth is present.
The membranous labyrinth is filled with endolymph.
And membranous labyrinth is separated from the bony labyrinth by another fluid called the perilymph.
Bony labyrinth
The bony labyrinth consists of three parts:
Cochlea:
Resembles the shell of a common snail.
The spiral ridge of bone (spiral lamina) which partially divides the cochlear canal into
The division is completed by the basilar membrane.
The scala vestibuli communicates with scala tympani at the apex of the cochlea by a small opening called the helicotrema.
As a whole:
The bony cochlea has three compartments divided by a vestibular membrane (Reissner’s membrane) & basilar membrane.
Fenestra cochleae (Round window) is a round opening present in the cochlea that opens into the scala tympani of the cochlea.
And it is closed by the secondary tympanic membrane.
But Fenestra vestibuli (Oval Window) opens in the vestibule.
Scala vestibuli and scala tympani are filled with perilymph as they are part of the bony labyrinth (cochlea.)
Scala media/ Spiral duct of the cochlea is filled with endolymph as it is the part of the membranous labyrinth.
Tips
Summary Connection pathway
Stapes (from middle ear cavity)
|
Oval window (fenestra vestibuli), an opening on the vestibule
|
Vestibule
|
Scala vestibuli (of cochlea)
|
From the apex of the cochlea,
communicate with
Scala tympani (of cochlea)
|
Round window, a round opening present on the cochlea (lower part)
[Which is guarded by secondary tympanic membrane]
|
Thus, perilymph of scala tympani doesn’t escape into
|
Tympanic cavity (middle ear)
Tips
Vestibule:
Opening present in vestibule
Semicircular canals:
There are three bony semicircular canals
Above 3 canals open into the vestibule by five opening.
Dilated of each canal is called ampulla which corresponds with the ampulla of the semicircular duct of the membranous labyrinth.
Membranous labyrinth
It is present within the bony labyrinth.
It has a continuous closed cavity that is filled by endolymph.
Spiral duct of the cochlea or Scala media
Scala media present between the scala vestibuli and the scala tympani.
Roof:
Formed by vestibular membrane which separates it from scala vestibule.
Floor:
Formed by basilar membrane (that separates it from scala tympani).
The basilar membrane of the spiral duct of cochlea contains the Spiral organ of Corti which is the end organ for hearing.
Posteriorly, the duct is connected to the saccule.
Spiral Organ Of Corti
It is an organ of hearing located on the basilar membrane of the cochlear duct (Spiral duct of cochlea).
Importance component:
* Tunnel of rod is formed by the inner and outer rod cells and separates the inner and outer hair cells.
* Inner & outer hair cells - receptor cells of hearing, posses stereocilia & located on the basilar membrane and
* Membrana tectoria located above the hair cells and helps to stimulate hair cells.
* Hair cells are innervated by the process of bipolar cells of spinal ganglion from where cochlear nerve arises.
Note: Cochlear duct / spiral duct of cochlea containing endolymph lies in between the scala vestibuli and scala tympani containing perilymph.
Saccule and utricle
They are present within the vestibule.
Saccule - continue with the spiral duct of the cochlea anteriorly.
Utricle receives the end of three semicircular ducts through five opening.
Tips
Spiral duct of Cochlea
|
Utricle
|
Saccule
|
Semicircular ducts
The duct of saccule united with the duct of the utricle to forms the ductus endolymphaticus which passes through the aqueduct of the vestibule in the posterior part of the petrous part of the temporal bone.
The medial wall of saccule and utricle are thickened to form macula which is the static balance receptor.
Mnemonic:
SUM, saccule and utricle has maculae as receptor.
Semicircular Ducts
They lie within the semicircular canal.
Dilated part of the semicircular duct called ampulla contains crista which is the kinetic balance receptor.
* Cristae respond to pressure changes in the endolymph caused by movements of the head.
Tips:
Maculae sense the position of the head in response to gravity and linear acceleration ie. static balance
Cristae respond to angular acceleration ie kinetic balance.
Summary