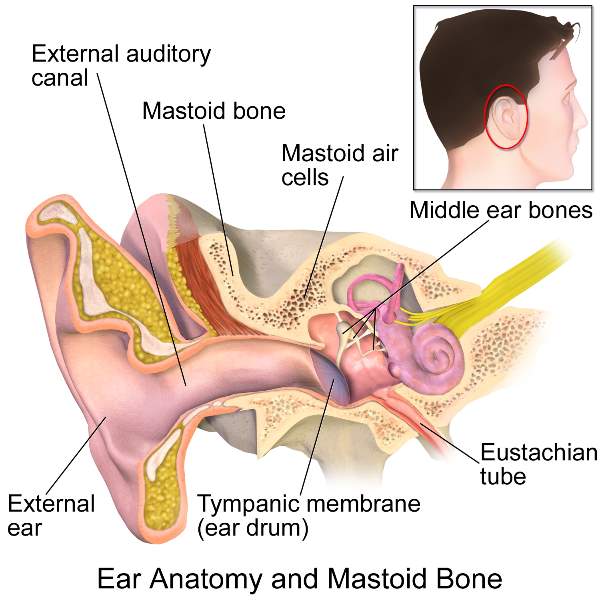 2 years ago 1643
Ear
External ear consists of:
Auricle
Made from the single plate of elastic cartilage.
However lowest part of the auricle is soft and consists only of fibrocartilagenous tissue and called the lobule for the wearing the earrings.
Parts of auricle
External Acoustic MeatusIt is the channel for sound waves to reach the tympanic membrane.
It is about 24mm long in adult which is divided into the outer Cartilaginous part and inner bony part.
Cartilaginous part:
Bony part:
[External acoustic meatus is lined by skin ie keratinized stratified squamous epithelium, which further continued to form the outer cuticular layer of the tympanic membrane]
Tympanic membrane (Eardrum)
Direction:
Downwards, forwards and laterally
Attachment:
Its circumference is attached to the tympanic sulcus present in the petrous part of the temporal bone, but superiorly where sulcus is deficient is attached to tympanic notch.
From the ends of the notch, anterior and posterior malleolar folds arise.
The membrane is held tense by the inward pull of the tensor tympani muscle which is inserted into the upper end of the handle of the malleus.
Surfaces
Outer surface lined by the thin skin.
The inner surface provides attachment to the handle of the malleus which extends up to its center.
[The point of maximum convexity lies at the tip of the handle of the malleus and is called umbo.]
Structure of Tympanic membrane
Lining epithelium:
1)  External acoustic meatus:
Skin- Stratified squamous epithelium
2) Tympanic membrane
3) Auditory tube - Ciliated columnar epithelium
Note:
As the outer cuticular layer is a continuation of skin that lined external auditory meatus, it is lined by keratinized stratified squamous epithelium.
The main component of the middle ear is filled by air.
Thus inner layer of the tympanic membrane is lined by ciliated columnar epithelium.
Function of tympanic membrane
It makes vibration of air or sound then transmit to the handle of the malleus which is attached to the eardrum and to the incus and stapes (ear ossicle).
Middle ear (Tympanic cavity)
Cavity of middle ear divided into:
Communication of middle ear cavity
[Note: Auditory tube open on the lateral wall of the nasopharynx.]
Contents of middle ear:
[Note: Ligament of ear ossicles need to stabilize the ossicles]
Boundaries of Middle ear cavity
Roof
Note:
Tegmen tympani prolonged to form the roof of the canal of tensor tympani.
Tegmen tympani is elevated due to the underlying semicircular canal of the inner ear.
Floor / Jugular wall
Note:
Superior petrosal sinus drain into the transverse sinus
Inferior petrosal sinus drains into the superior bulb of the internal jugular vein
Anterior wall/ Carotid wall
[Note: Anterior wall is directed toward the apex of the petrous part of the temporal bone.]
Posterior wall/ Mastoid wall
Lateral wall / Membranous wall
Medial wall

Ear ossicles: Malleus, incus and stapes are bone within the bone, as these three bony ossicles lie within the petrous part of the temporal bone.
Malleus (hammer-shaped)
The handle of malleus is attached up to the upper half of the tympanic membrane
Stapes:
The footplate fits into the fenestra vestibuli (round window)
[Mnemonic: MISs]
Synovial Joint of Ossicles
Muscles of the Middle Ear
Tensor tympani
It lies in the canal for tensor tympani which lie above the auditory tube which forms the anterior wall of the middle ear
--Inserted to the handle of malleus
Stapedius
Inserted into the stapes bone

Function of middle ear
It transmits sound waves from the external ear to the internal ear through the chain of ear ossicles, and thus transforms the air-borne vibrations from the tympanic membrane to liquid borne vibrations in the internal ear.
The intensity of the sound waves is increased ten times by the ossicles.
Tympanic or Mastoid Antrum
Mastoid antrum is a small, circular, air-filled space situated in the posterior part of the petrous temporal bone.
Mastoid Air Cells
Mastoid air cells are a series of intercommunicating spaces of variable size present within the mastoid process.
Mastoid air cells communicate superior with mastoid antrum.