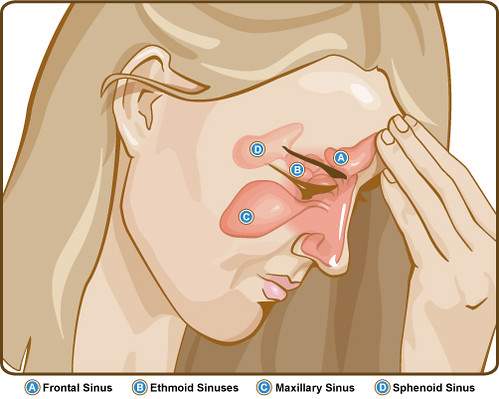 Paranasal sinuses:
Paranasal sinuses are air-filled spaces present within the skull bone around the nasal cavity.
Function:
Four paranasal sinuses
Artery supply of nasal septum
Kiesselbach's plexus or Little’s area
It is an area in the anteroinferior part of the nasal septum where several vessels supplying the nasal cavity have anastomoses forming a vascular plexus.
This is a common site of nose bleeding.
Bleeding from the nose is called epistasis.
Artery supply of lateral wall of nasal cavity
1. The anterosuperior part is supplied by the anterior ethmoidal artery & posterior ethmoidal artery
2. The anteroinferior part is supplied by branches from the facial artery
3 The posterosuperior part is supplied by branches of the sphenopalatine artery
4 The posteroinferior part is supplied by branches of the greater palatine artery
(which pierce the perpendicular plate of palatine bone and passes up through the incisive fossa.)
Nerve supply of frontal air sinus
Nerve supply of maxillary air sinus
Note:
(Maxillary nerve carries sensation from the maxilla, skin over maxilla, maxillary air sinus and upper jaw)
Development of paranasal sinuses
The sinuses are in the primitive state, or even absent at birth.
They enlarge rapidly during the ages of 6 to 7 years.
They develop due to the enlargement of pneumatic bone.
Maxillary air sinus is the 1st sinus to develop.
Frontal and ethmoidal sinuses develop after birth.
How maxillary hiatus reduced in size during living conditions?
How maxillary hiatus is covered by bone?
Clinical anatomy