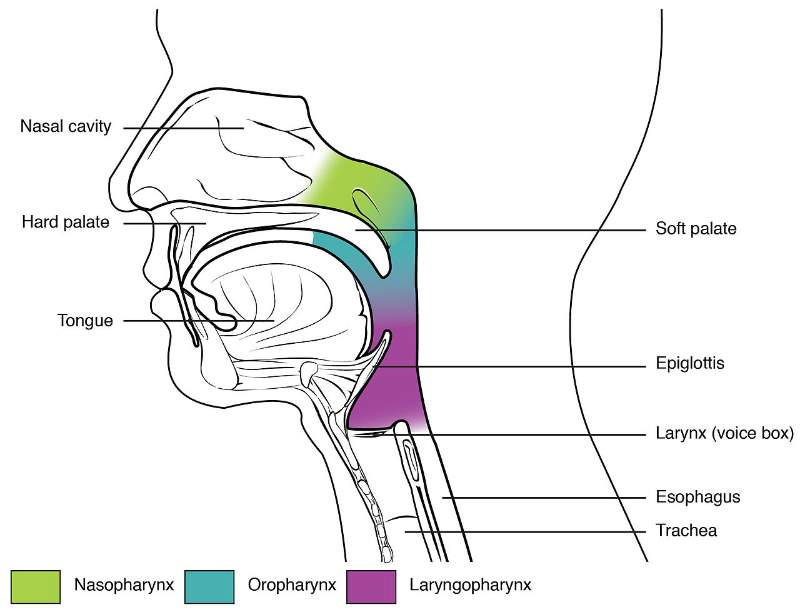 Form the lower border of cricoid cartilage:
From the upper border of the thyroid cartilage,
The common carotid artery bifurcated into external and internal carotid artery.
Boundary of pharynx as a whole
Superiorly
Base of the skull, with the basilar part of the occipital bone (in front of the pharyngeal tubercle) & the posterior part of the sphenoid.
Inferiorly
Pharynx is continuous with the esophagus at the lower border of the cricoid cartilage, corresponding to the level of 6th cervical vertebra
Posteriorly
Retropharyngeal space, prevertebral fascia which separates it from the cervical vertebral bodies
Anteriorly
Communicates with:
Note:
Oropharyngeal isthmus is the junction between the mouth cavity and oropharynx
Nasopharyngeal isthmus:
Junction between nasopharynx and oropharynx
It represents the location where soft palate lies during the swallowing of food so that food doesn’t enter into the nasopharynx.
Communication of pharynx
Part of Pharynx
Function
Lining epithelium
Nasopharynx: respiratory epithelium
Pseudostratified ciliated columnar epithelium
Oropharynx & Laryngopharynx:
Non-keratinized stratified squamous epithelium
Signification of Lateral wall:
Nasopharynx:
There is recess or fossa (slightly depressed fossa) behind the opening of the cartilaginous part of the auditory tube on the lateral wall of the nasopharynx
This is called as Pharyngeal Recess or Fossa of Rosenmuller.

Food bolus is pushed through the oropharyngeal isthmus to oropharynx from the mouth cavity.
|
Nasopharyngeal isthmus is closed by elevation of the soft palate by levator veli palatini and tensor veli palatini.
This does not let the food bolus from entering the nose.
|
The inlet of the larynx is closed by epiglottis as the aryepiglottic fold is pulled backward by aryepiglottic and oblique aryepiglottic muscle.
|
Similarly, larynx and pharynx are elevated behind the hyoid bone by longitudinal muscles of pharynx and the food is pushed down over the posterior surface of the epiglottis, and close the inlet of larynx.
|
Food bolus is passed from pharynx to esophagus by contraction of constrictor muscles of pharynx inducing peristalsis movement.
Clinical Anatomy