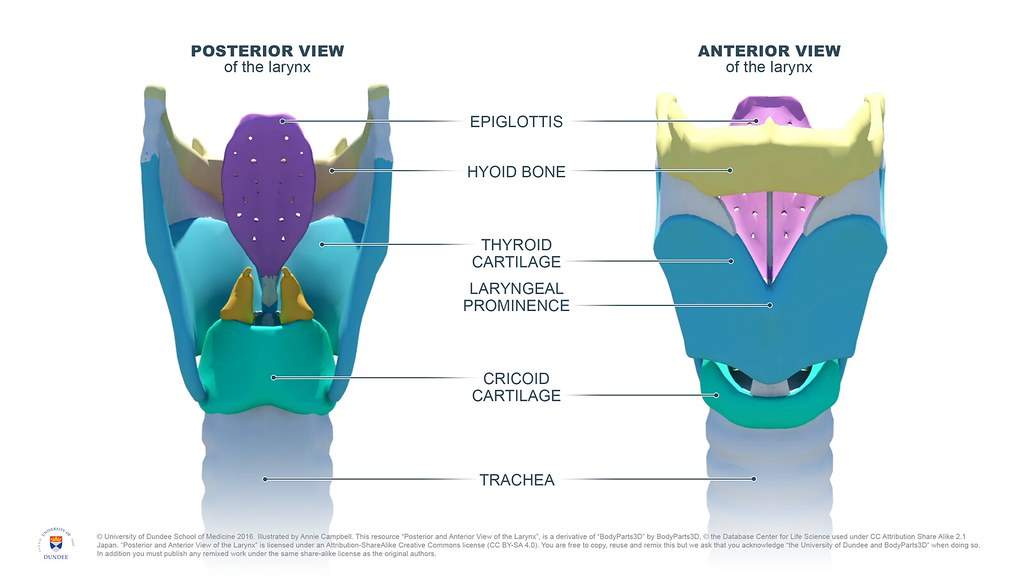 1 year ago 327
Pathway for air
Air- Nose- Nasal cavity
|
Posterior nasal apparatus
|
Nasopharynx
Oropharynx
|
Laryngeal inlet
Larynx
|
Below the lower border of the cricoid cartilage
The larynx is continuous as Trachea
LarynxExtension: From the inlet of the larynx to the lower border of the trachea
Vertebral level: C3 to C6
At puberty, the male larynx grows rapidly and become larger than female, producing the prominent structure on the anterior of thyroid cartilage known as Adam’s apple which makes the voice of male louder and low pitched.
Cartilages of Larynx
Total 9 cartilages among which three are unpaired and three are paired.
Unpaired cartilage
Paired cartilages
Thyroid cartilage:
Largest V-shaped cartilage
Consist of Right and Left Lamina which fused anteriorly making prominent structure called Adam’s Apple in male.
Importance landmark:
The common carotid artery bifurcated into external and internal carotid artery, from the upper border of the thyroid cartilage.
Cricoid cartilage:
Ring like shape
Anterior part is narrow(arch) & posterior part (lamina) is broad.
Importance landmark from cricoid cartilage
Cricoid cartilage correspond to the level of 6th cervical vertebrae
Form the lower border of cricoid cartilage:
Epiglottis
Leaf-like shaped
Anteriorly attached to tongue by 3 fold of mucous
Anterior Surface as related to oral cavity lined by non-keratinized stratified squamous epithelium.
Posterior surface is covered by smooth mucous membrane lined by respiratory epithelium (pseudostratified ciliated columnar epithelium)
Epiglottis is attached to arytenoid cartilage by aryepiglottic fold.
Aryepiglottic muscle helps to close the inlet of the larynx during swallowing.
Epiglottis form the anterior boundary of the laryngeal inlet.
Function of epiglottis:
During deglutition, it moves forward and upward by longitudinal muscles of pharynx & is squeezed between the base of the tongue & larynx.
So food bolus slips over its anterior surface as it bends back over the laryngeal inlet.
Arytenoid cartilage
Pyramidal shaped
Rest on the lamina of the cricoid cartilage on its upper border.
Attachment
Corniculate cartilage:
Lie on the apex of arytenoid cartilage just posterior part of aryepiglottic fold
Cuneiform cartilage:
Lie in the aryepiglottic fold ventral to the corniculate cartilage
Histology of laryngeal cartilage
Hyaline cartilage
They ossify after the age of 25 years
Elastic cartilage
They don’t ossify throughout the life
Laryngeal joint
Cricothyoid joint (Synovial joint)
Cricoarytenoid joint (Synovial joint)
[Laryngeal ligaments and Membranes]

Extrinsic ligaments & membrane
1) Thyroid membrane:
Connects the thyroid cartilage to the hyoid bone.
The membrane is pierced by
2) Hyoepiglottic ligament connects the epiglottis to hyoid bone
3) Cricotracheal ligament connects cricoid cartilage to the upper end of the trachea.
Intrinsic membrane and ligament of larynx
1) Quadrate membrane:
2) Vestibular ligament
3) Conus Elasticus
4) Vocal ligament
Within The Cavity of Larynx
The cavity of larynx extends from the inlet of the larynx to the lower border of the cricoid cartilage.
Laryngeal inlet bounded on each side by piriform fossa.
Boundary of the inlet of the larynx:
Piriform fossa
Piriform fossa is the fossa which is present in the lateral wall of the Laryngopharynx.
Or can be said as fossa present on either side of the laryngeal inlet.
Boundary of piriform fossa:
Importance:
Within the cavity of the larynx, there are two folds of mucus membrane on each side.
[Rima is the narrowest part of the larynx.]
Subdivision of laryngeal cavity
The vestibular and vocal fold divides the cavity of the larynx into three parts
[ The extension of the sinus of the larynx is called the saccule of the larynx which contains mucous glands which helps to lubricate the vocal folds.
It is often called oil can of larynx.]
Lining epithelium of the mucous membrane of the larynx
Lined by non-keratinized stratified squamous epithelium

Lined by respiratory epithelium (pseudostratified ciliated columnar epithelium)
Tips
As the anterior part of the epiglottis and the aryepiglottic fold is related to food passage, they need to be highly protective. So that pressure of food could tear out the mucous membranes.
That’s why lined by stratified (multiple layers) epithelium.
Similarly, Stratified (multi-layer cells) is needed to provide extra protection to the vocal cord against the foreign bodies which may enter the larynx accidentally.
[Intrinsic muscles of Larynx]
Cricothyroid: the only muscle which lie outside
-Posterior cricoarytenoid
-Lateral cricoarytenoid
-Transverse arytenoid
Oblique arytenoid
-Aryepiglottic
-Thyroepiglottic
Thyroarytenoid
-Vocalis
Muscles acting on the larynx
Tips
The vocal process and muscular processes move in opposite directions.
Any muscle which pulls the muscular process medially, pushes the vocal process laterally, resulting in the abduction of vocal cords.
This is done by only one pair of muscle, the posterior cricoarytenoid.
Muscles that pull the muscular process forward, also laterally will push the vocal process medially causing the adduction of vocal cords.
This is performed by lateral cricoarytenoid and transverse arytenoid.
Adduction & Abduction - Cricoarytenoid joint
Tension & relaxation of vocal cord - Cricothyroid joint
Blood supply of the larynx
Arterial supply
Up to vocal folds:
By the superior laryngeal artery, branch of superior thyroid artery of external carotid artery
Below the vocal fold:
By the inferior laryngeal artery, branch of inferior thyroid artery
Tips:
Inferior thyroid artery, branch of thyrocervical artery which is the branch of 1st part of subclavian artery
Mnemonic for branch of subclavian artery: VIT C D
Venous Drainage:
Up to the vocal fold:
Superior laryngeal vein drains into superior thyroid vein which drains to the internal jugular vein
Below the vocal fold:
By inferior laryngeal vein drain into inferior thyroid vein which then drain into the left brachiocephalic vein.
Nerve supply of larynx
Motor supply:
All the intrinsic muscles of the larynx are supplied by the recurrent laryngeal nerve
Except the cricothyroid - supplied by the external laryngeal nerve.
Sensory supply:
Tips
Branches of vagus nerve
1) Superior laryngeal nerve
2) Recurrent laryngeal nerve (mixed nerve)
Course of Right & Left Recurrent laryngeal nerve varies
Development of larynx:
The larynx is developed from the cephalic part of Laryngo-tracheal tube which has been developed from the respiratory diverticulum which has grown the ventral wall of the pharyngeal part of the foregut
(Endodermal in origin)
Cartilages of larynx develop from 4th & 6th branchial arches.
(mesodermal in origin)
Clinical Anatomy