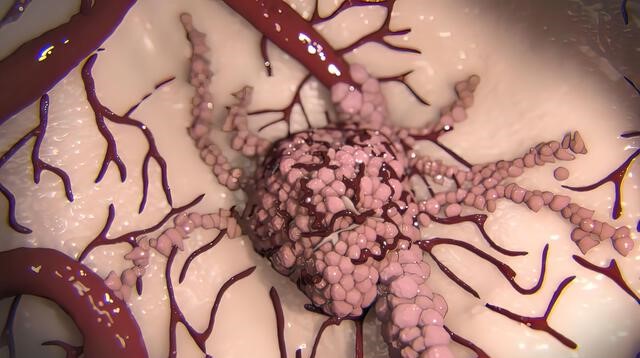 “A neoplasm is an abnormal mass of tissue, the growth of which exceeds and is uncoordinated with that of the normal tissues and persists in the same excessive manner after cessation of the stimuli which evoked the change.”

In the modern era, a neoplasm is defined as a genetic disorder of cell growth that is triggered by acquired or less commonly inherited mutations affecting a single cell and its clonal progeny. (Ref Robbin's 10th Edition)

The nomenclature of tumors and their biological behavior are based primarily on - Parenchymal component.

1. Benign mesenchymal tumor:
Designated by attaching the suffix - oma to the cell from which the tumor arises.

They are classified based on their

An adenoma is a term applied to a benign epithelial neoplasm derived from glands, although they may or may not form glandular structures.

Papilloma is a benign epithelial neoplasm producing finger-like or warty projections from epithelial surfaces are referred to as papilloma. 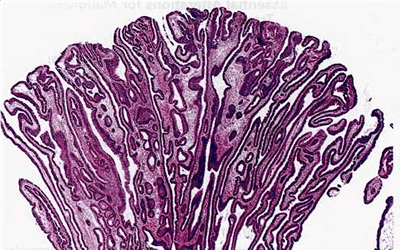 Figure: Papilloma of the colon with finger-like projections into the lumen

When a neoplasm, benign or malignant, produces a macroscopically visible projection above a mucosal surface and projects into the lumen, it is called a polyp. 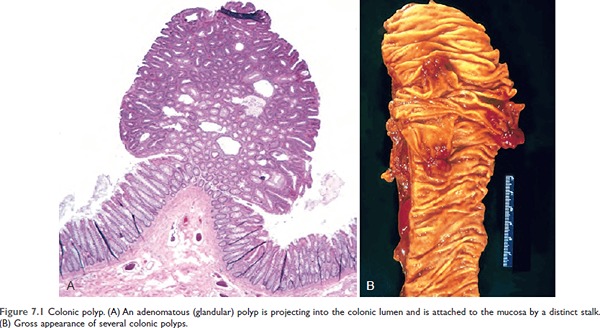 Figure 7.1 Colonic polyp. (A) An adenomatous (glandular) polyp is projecting into the colonic lumen and is attached to the mucosa by a distinct stalk.
(B) Gross appearance of several colonic polyps.

Example of mixed tumor:
Pleomorphic adenoma (Benign mixed tumor of the salivary gland) - which contains epithelial components scattered within a myxoid stroma that may contain islands of cartilage or bone.

The tumor that arises from more than one germ layer, usually from all three germ layers is called a teratoma. 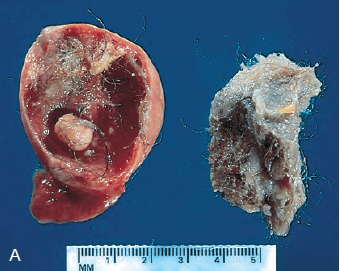 Figure: Gross appearance of an opened cystic teratoma of the ovary. Note the presence of hair, sebaceous material, and a tooth.

Hamartomas are disorganized but benign-appearing masses composed of cells indigenous/native to the involved site.

An example of hamartoma is Pulmonary chondroid hamartoma (which contains islands of disorganized, but histologically normal cartilage, bronchi, and vessels).

Choristoma is the ectopic island of normal tissue.

An example of choristoma is a small nodule of a well-developed and normally organized pancreatic substance, which may be found in the submucosa of the stomach, duodenum, or small intestine. 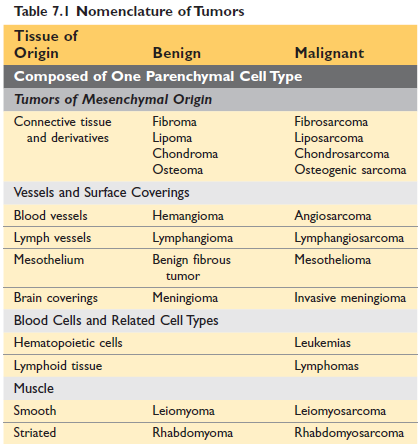 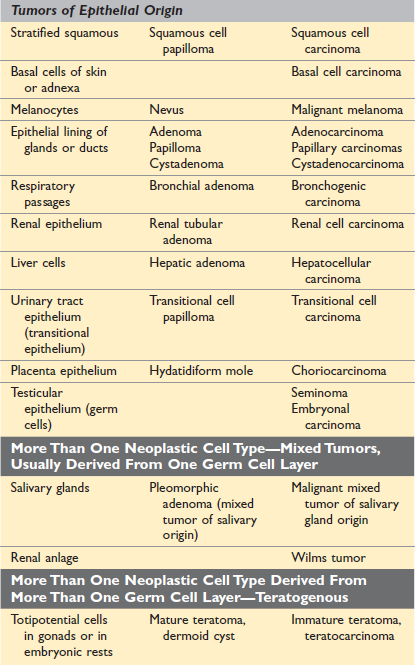 B) Histogenetic classification (i.e based on cell origin)

1. The nature of endothelium, mesothelium, and synovium – the endothelial and mesothelial cells although generally classified as connective tissue, may on occasion give rise to the tumor, which resembles those of epithelial origin.

4. Debatable origin of a tissue - when the precise origin of the cell is in doubt.

Example: Melanocytes of the skin

5. Origin from highly specialized tissue - though this is the mesenchymal origin, we don’t call them sarcoma.

6. Origin from embryonic tissues - Some tumor arises from cells that are present during development but disappear in adult life.
Example: Embryonic tumors of infancy: Retinoblastoma, Neuroblastoma, Nephroblastoma

7. Origin from germ cells- Germ cells are totipotential and tumors derived from them can differentiate into any tissue of the body.

8. Origin from placental tissues- The Hydatidiform mole and choriocarcinoma are derived from chorionic tissue.

A histological classification is used under the following conditions:

D) Classification according to behavior ***

Differences between benign and malignant tumors: 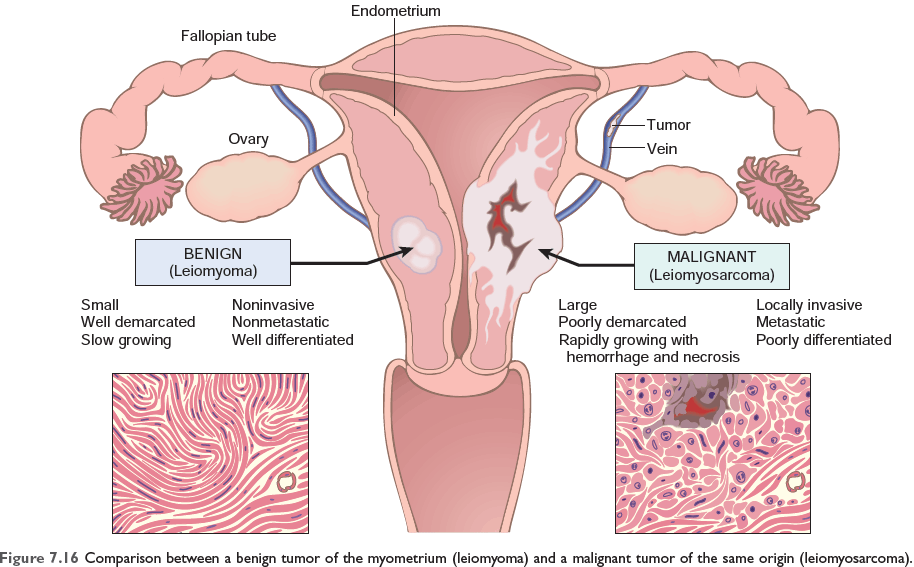 Figure 7.16 Comparison between a benign tumor of the myometrium (leiomyoma) and a malignant tumor of the same origin (leiomyosarcoma)

They are locally invasive and therefore are not benign, but have little or no tendency to metastasize, so not malignant.

When dysplasia is severe and involves the full thickness of the epithelium but the lesion does not penetrate the basement membrane, it is referred to as carcinoma in situ.

The lesion has the cytological features of malignancy but does not penetrate the basement membrane.

The tumor which has all the histological characteristics of a malignant tumor, including sometimes lymphatic and vascular invasion but clinically remains silent is called latent cancer.

An example of latent cancer is Carcinoma of the prostate.

This is the late appearance of metastasis after the primary tumor has been removed.

Cancer that has suddenly regressed spontaneously and permanently.

According to the secretion of hormones:

The natural history of malignant tumors can be divided into four phases.

Anaplasia means lack of differentiation; is a hallmark of malignancy.

1) Pleomorphism of cells and nucleus:

4) Loss of polarity: Orientation is lost and grows in a disorganized haphazard fashion.

Dysplasia means disordered growth characterized by loss of uniformity as well as loss of architectural orientation of cells.

Sites of dysplasia are the Cervix of the uterus, the epidermis of the skin, the epithelium of the respiratory tract

When dysplastic changes are marked or severe and involve the entire thickness of the epithelium, the lesion is considered a preinvasive neoplasm and is called carcinoma in situ.

When it penetrates the basement membrane it becomes an invasive neoplasm.

Example of Carcinoma in situ: In Cervix, Breast, Skin

It is determined by 3 factors:

So, growth occurs if there is excess cell production over cell loss.

The growth of cancers is accompanied by progressive infiltration, invasion, and destruction of the surrounding tissue, whereas nearly all benign tumors grow as cohesive expansile masses that remain localized to their site of origin and lack the capacity to infiltrate, invade or metastasize to distant sites.

Most benign tumors grow as cohesive expansile masses and develop a connective tissue capsule, so localized to their site of origin. They do not penetrate the capsule or the surrounding normal tissue so do not metastasize to distant sites.

Metastasis is the tumor implant to the sites that are physically discontinuous with the primary tumor.

Metastasis can be defined as the spreading of the tumor to the sites that are physically discontinuous with the primary tumor.

1. Seeding of body cavities and surfaces

Krukenberg's tumor is metastasis of carcinoma of the stomach to both ovaries transperitoneally.

The Most common pathway for the initial dissemination of carcinoma is the lymphatic route.

The pattern of lymph node involvement follows the natural route of drainage.

Example of lymphatic spread of carcinoma

A sentinel lymph node is defined as the first node in a regional lymphatic basin that receives lymph flow from the primary tumor.

Veins are more commonly involved than arteries due to thinner walls.

The lung and liver are the sites of hematogenous metastasis because they receive systemic venous outflow.

There are a number of factors relating to the patient and environment that influence predisposition to cancer.

The global impact of cancer

In 2018, it was estimated that number of new cases was about 9.5 million worldwide, leading to 7.6 million deaths (21,000 death /day). By 2030 it is projected that the number of cancer cases and cancer–related deaths will be increased to 21.4 million and 13.2 million respectively.

An individual likelihood of developing cancer is expressed by the national incidence of mortality rate. 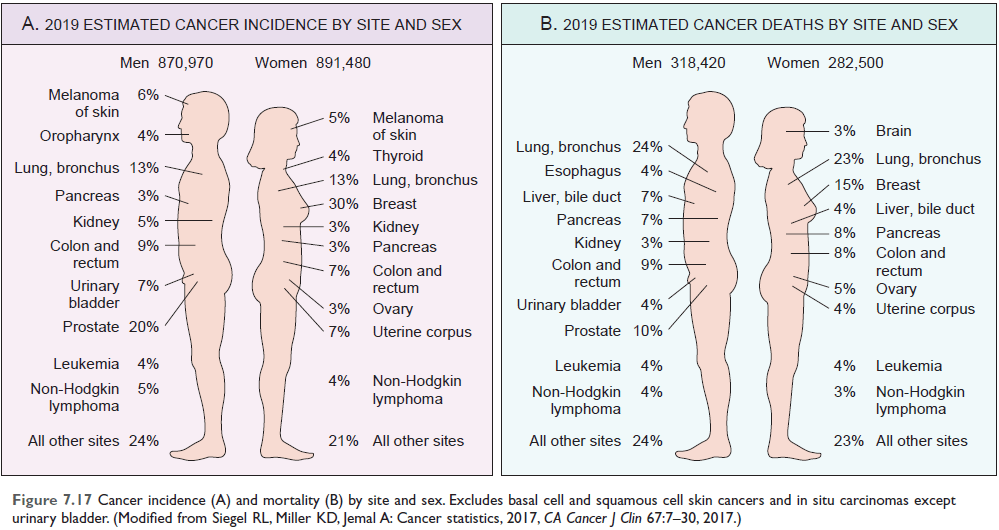 Although both genetic and environmental factors contribute to the development of cancer, environmental influences appear to be the dominant risk factors for most cancers.

Among the best-established environmental factors affecting cancer risk are the following:

Smoking:
Cigarettes have been implicated in cancer of the mouth, pharynx, larynx, esophagus, pancreas, bladder and most significantly, about 90% of lung cancer deaths.

Increase the risk of carcinoma of the oropharynx (excluding lip), larynx, and esophagus and hepatocellular carcinoma,

Alcohol and tobacco together increase the risk of cancer in the upper airway and digestive tract. 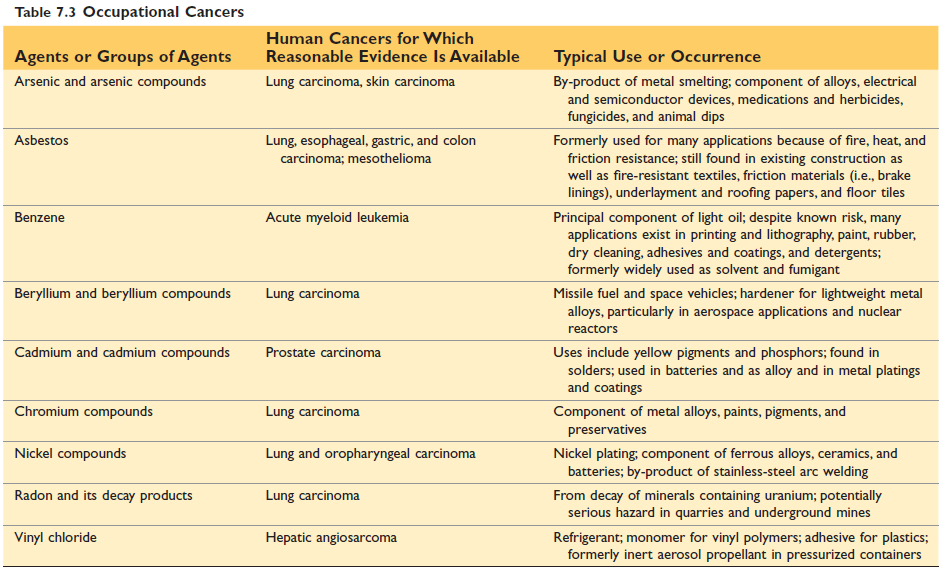 Genetic predisposition and interactions between environmental and Heredity factors:

Genetic predisposition can be divided into three categories:

Acquired conditions that predispose to cancer can be divided into

4) Metaplasia: Columnar metaplasia of the esophagus

Cancer is more common after 55 years of age.

Certain cancers are particularly common in children under 15 years of age.