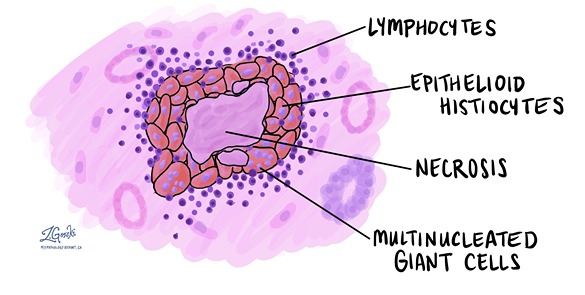 Chronic inflammation can be defined as, inflammation of prolonged duration (weeks or months) in which active inflammation, tissue destruction, and attempts at repair coexist, in varying combinations.

In contrast to acute inflammation, which is manifested by vascular changes, edema, and predominantly neutrophilic infiltration, chronic inflammation is characterized by the following:

1. Persistent microbial infections that are difficult to eradicate

Role of macrophages in Chronic Inflammation:

The products of activated macrophages serve to eliminate injurious agents such as microbes and to initiate the process of repair and are responsible for much of the tissue injury in chronic inflammation.

The dominant cells in most chronic inflammation are macrophages, which contribute by

Granulomatous inflammation is a form of chronic inflammation characterized by collections of activated macrophages, often with T lymphocytes, and sometimes associated with necrosis.

Example of Diseases with Granulomatous Inflammation:

A granuloma is a focus of chronic inflammation consisting of a microscopic aggregation of macrophages that are transformed into epithelial-like cells surrounded by a collar of mononuclear leukocytes, principally lymphocytes and occasionally plasma cells.

Granuloma formation is a cellular attempt to contain an offending agent that is difficult to eradicate. In this attempt, there is often strong activation of T lymphocytes leading to macrophage activation, which can cause injury to normal tissues.
The activated macrophages may develop abundant cytoplasm and begin to resemble epithelial cells and are called epithelioid cells. Some activated macrophages may fuse, forming multinucleate giant cells.

A) On the basis of pathogenesis:

1. Foreign body granulomas: incited by relatively inert foreign bodies which were resistant to digestion/degradation. And induce inflammation in the absence of T cell–mediated immune responses. Eg: due to talc (associated with intravenous drug abuse), sutures, or other fibers that are large enough to preclude phagocytosis by a macrophage and are not immunogenic.

2. Immune granuloma: caused by insoluble particles, typically persistent microbes (i.e difficult to eradicate)
are caused by a variety of agents that are capable of inducing a persistent T cell-mediated immune response. In such responses, activated Th1 cells produce cytokines such as IFN-γ, which activate macrophages.

No central region of necrosis
Found in inflammatory conditions (e.g., sarcoidosis and Crohn's disease), vasculitis, and exposure to foreign objects.

Here, the Central region of necrosis is present.
Commonly found in Immune granuloma

C) According to etiology

Epithelioid cells are the specialized macrophages

Giant cell:
Giant cells are large cells with more than one nucleus. 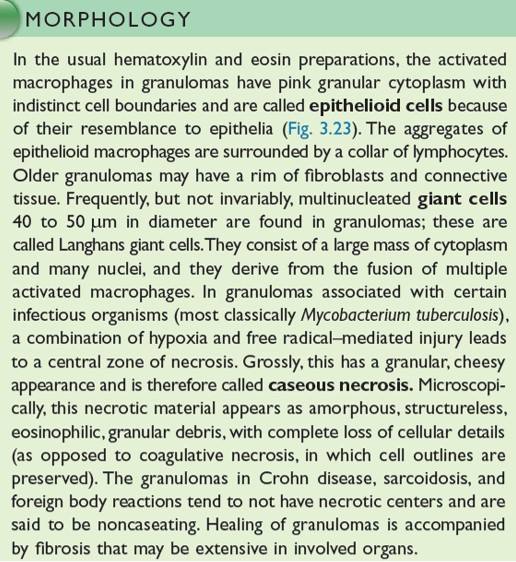 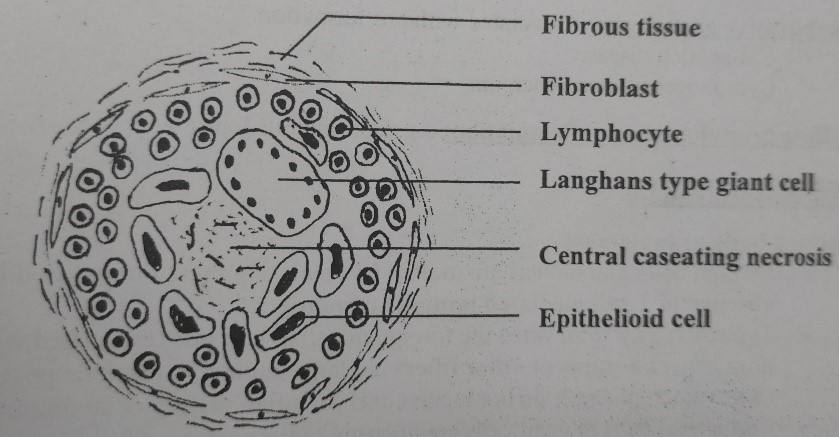 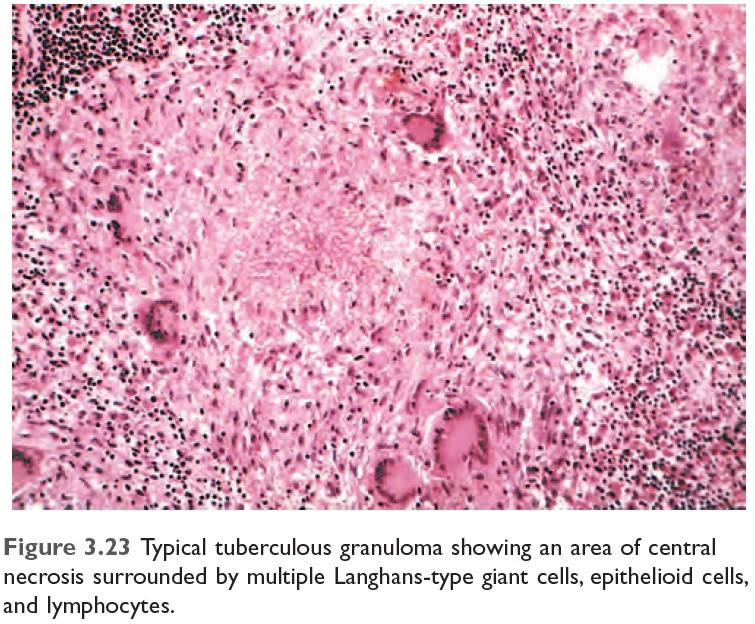 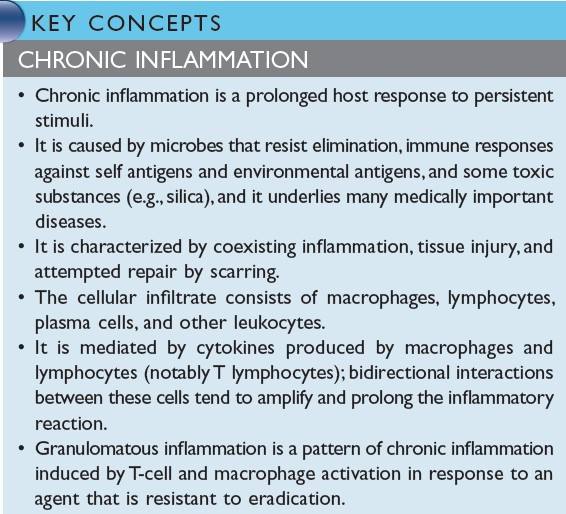 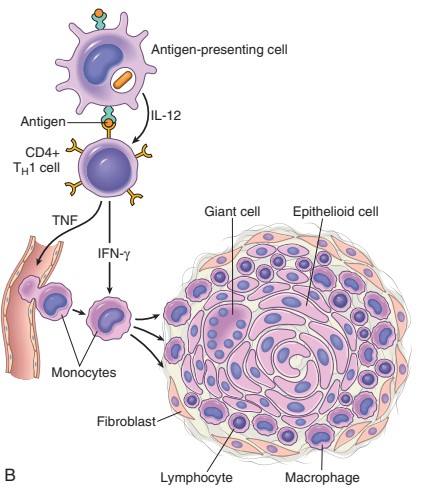 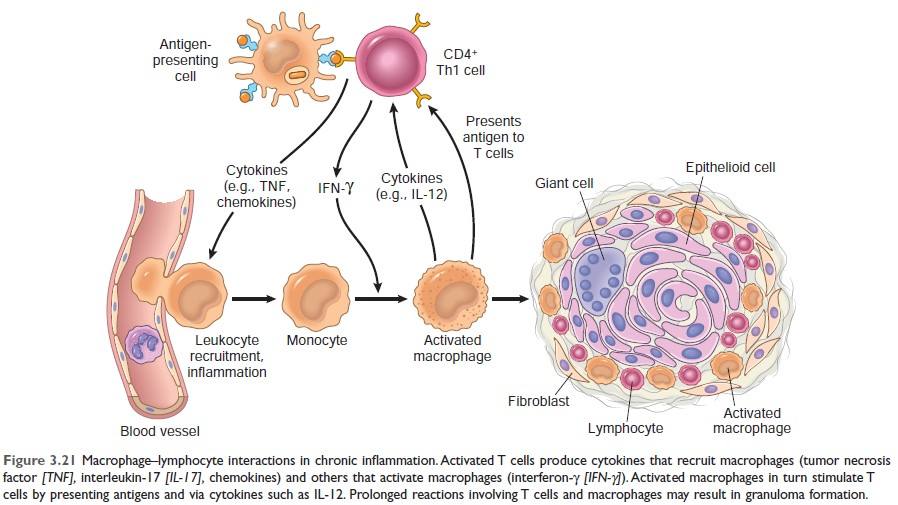 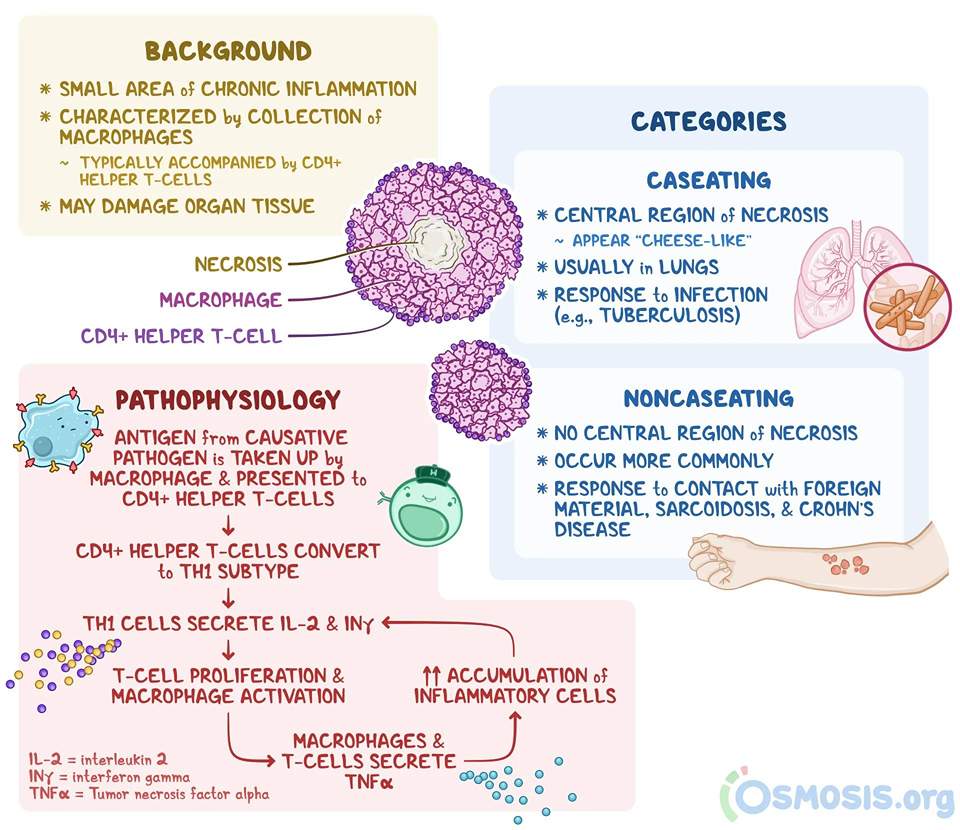 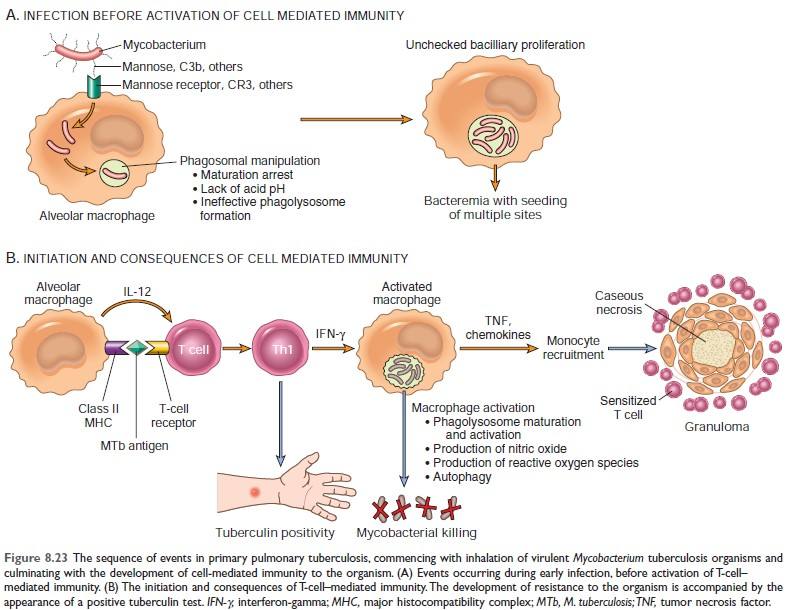 Cytokines (TNF, IL-1) stimulate the production of prostaglandins in the hypothalamus.

Acute phase proteins are plasma proteins, mostly synthesized in the liver, whose plasma concentration may increase several folds in response to inflammatory stimuli.

5) In severe bacterial infection (sepsis): DIC is caused by a high level of TNF.

In severe bacterial infections (sepsis), the large amounts of bacteria and their products in the blood stimulate the 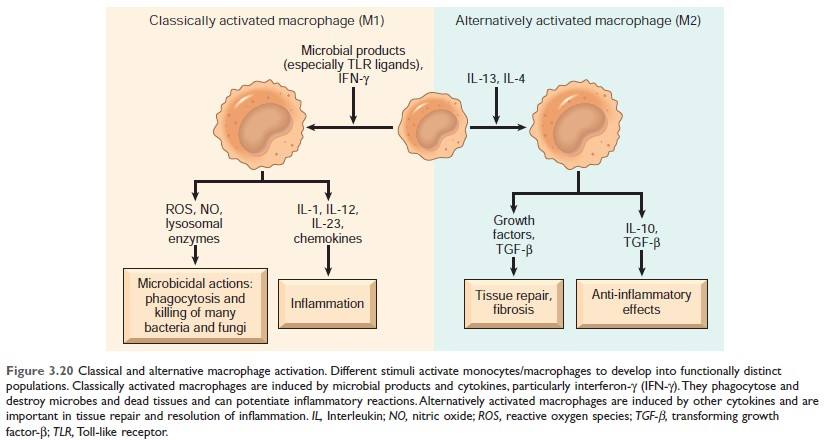