Spinal Tract and Its Pathway - Emedicodiary

Spinal Tract and Its Pathway 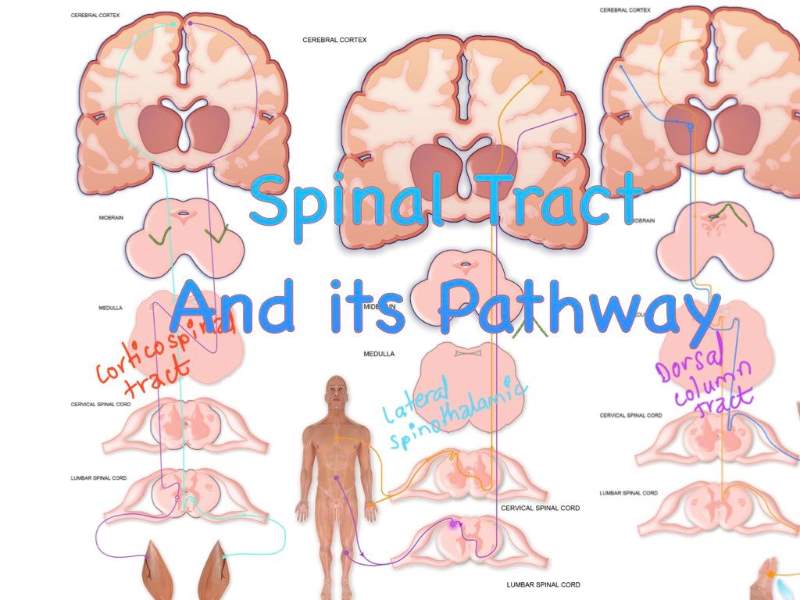 Spinal Tract and Its Pathway

Axon and dendrites of a neuron (nerve cell processes) are called nerve fiber.

5) When pyramidal tract are damaged, they may carry the voluntary impulses to some extent

Corticospinal tract grouped together to form a swelling known as pyramid
Hence, named as pyramidal tract

Which terminates by synapsing with anterior horn nuclei, supplying to the opposite side

2. About 20% of tract doesn’t cross the midline and descend in the anterior white column of the spinal cord of same side as the anterior corticospinal tract

Function of the pyramidal tract

These upper motor neuron synapse in the anterior horn nuclei of the spinal cord giving rise to a spinal nerve, which is termed as a lower motor neuron.

Similarly, upper motor neuron synapse in the cranial nuclei present in the brain stem giving rise to the cranial nerve.

Note: But superficial reflex is lost in both

Difference between pyramid and extrapyramidal tract

-As passes through the posterior white column in the spinal cord.
-In brain stem passes through medial lemniscus
1. Tract of Gall (Fasciculus Gracillis)
Carry sensory impulse from the lower half of body

2. Tract of Burdach (Fasciculus cuneatus)
Carry sensory impulse from the upper half of body

For every ascending tract— three orders of neurons

Except for tract of gall, & tract of Burdach — these tracts don’t synapse in the corresponding grey matter of spinal segment. They ascend through the posterior (dorsal ) white column of the spinal cord of same side and synapse with nuclei present in the medulla from where their 2nd order neuron arises

In case of Tract of Gall & Burdach, 2nd order neuron arise from nuclei of the medulla and cross the midline at the level of the medulla as internal arcuate fibers (forming sensory decussation)

Note: Cerebrum is related to contralateral side supply. So each and every tract(Both ascending & descending) arise/terminate from/to the cerebrum, most of them cross the midline and supply to the opposite side.

Arise from axon from nucleus Gracillis & Nucleus Cuneatus
|
Its internal arcuate fibers cross the midline and go to the opposite side at the level of the medulla (Forming sensory decussation)
|
In the brain stem, pass through medial lemniscus
|
Terminate in thalamus by synapsing with the ventral posterolateral nucleus

Arise as axon from the ventral posterolateral nucleus of the thalamus
|
Posterior limb of internal capsule and end in the somatosensory area (area no.3,1,2) of postcentral gyrus [cerebral cortex]

These tracts carry impulse from opposite half for:

and lateral white column (ascends as lateral spinothalamic tract). In spinal cord
|
On reaching the brain stem, lateral and anterior spinothalamic tracts together ascend as Spinal lemniscus
|
Terminate by synapsing with the ventral posterolateral nucleus of the thalamus from where 3rd order neuron arises

These fiber passes through the internal capsule and terminates in the somatosensory area (area no.3,1,2) of the postcentral gyrus.

Lemniscus:
Specific tracts which ascend through the white column of spinal cords, on reaching the brain stem, they combine and from a bundle of tracts (appearance like ribbon structure) known as lemniscus.