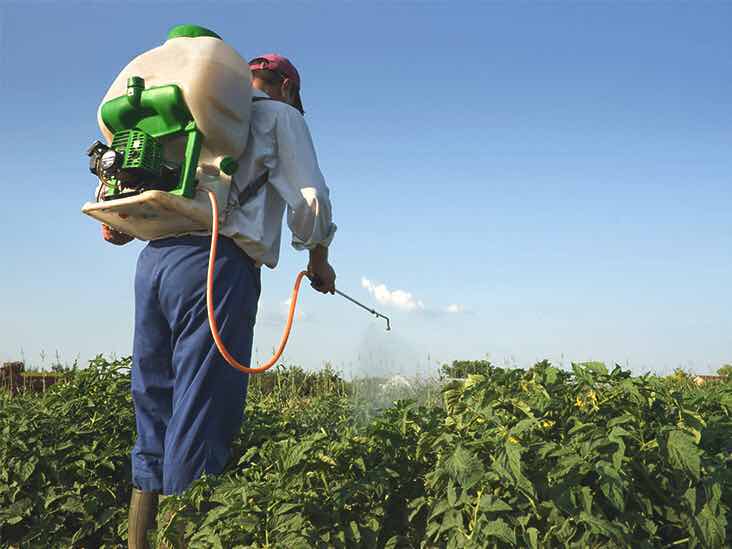 They are esters of phosphoric acid and form two series of compounds.
An agricultural poison

They are available as dusts, granules, and liquids.

They are absorbed by inhalation, through the skin, mucous membranes, and the gastrointestinal tract. When sprayed in the air, absorption in the plants occurs through leaves and stems.

They are mixed with a solvent, usually aromax, which is responsible for a kerosine-like smell in the body cavities, stomach contents, vomit, froth, etc.

Death usually occurs within 24 hours in untreated cases, and within 10 days in those treated cases when treatment is not successful.
In non-fatal cases, the acute effects last for 6 - 30 hours which disappear in 2 to 3 days, but may sometimes persist for 2 weeks. Complete recovery occurs in 10 days in patients treated early unless hypoxic encephalopathy intervenes.

Organophosphorus compounds bind firmly to the esterase enzyme, inactivating it by phosphorylation, at the myoneural junctions and synapses of the ganglions.

Phosphorylated acetylcholinesterase loses an alkyl group, due to which the enzyme cannot spontaneously hydrolyze and becomes permanently inactivated. They are called cholinesterase inhibitors.

Organic phosphates inhibit AChE in all parts of the body, due to which acetylcholine accumulates at the parasympathetic, sympathetic, and somatic sites. This produces a syndrome of over-activity due to unhydrolyzed acetylcholine with continued stimulation of local receptors and eventual paralysis of nerve or muscle.

The inactivation of cholinesterase enzymes becomes irreversible after 24 to 36 hours. Symptoms appear in both the sympathetic and parasympathetic nervous systems.

These symptoms can be easily remembered by the acronym SLUDGE: Salivation, lacrimation, urination, defecation, gastrointestinal distress, and emesis (Vomit).

Death is caused by paralysis of respiratory muscles, respiratory arrest due to failure of the respiratory center, or intense broncho-constriction. Late death, as long as 15 days after acute ingestion may be caused by ventricular arrhythmias.

Diagnosis may be confirmed by giving two mg. of atropine. In a normal person this causes marked atropinization, but in a case of poisoning by organophosphorus, symptoms are relieved without atropinizing.

Estimations of cholinesterase in erythrocytes & at the myoneural junction are confirmatory.

Treatment in case of OPC Poisoning:

The act or process of treating with atropine or can be defined as the physiological condition of being under the influence of atropine.

Porphyrinaemia, resulting in chromo-dacryorrhoea (shedding of red tears) due to accumulation of porphyrin in the lacrimal glands is seen very rarely.

In some cases, after one to four days muscle weakness and paralysis characterized by motor cranial nerve plasies, weakness of neck flexor and proximal limb muscles, and acute respiratory paresis are seen due to prolonged cholinesterase inhibition and muscle necrosis. It does not respond to oximes or atropine.

Delayed peripheral neuropathy can occur one to 5 weeks after exposure to certain compounds, such as parathion, malathion, trichlorfon, etc. It begins with paraesthesia and pain or cramps in the calves followed by ataxia, weakness, and toe drop. It rapidly progresses to a flaccid paresis which can ascend similar to Guillain-Barre syndrome. Reflexes are diminished. The disease may progress for 2 to 3 months, and muscle wasting occurs.

Acetylcholine is the neurotransmitter used at the neuromuscular junction—in other words, it is the chemical that motor neurons of the nervous system release in order to activate muscles.

Acetylcholine exerts its effects by binding to and activating receptors located on the surface of cells. There are two main classes of acetylcholine receptors, nicotinic and muscarinic. They are named for chemicals that can selectively activate each type of receptor without activating the other: muscarine is a compound found in the mushroom Amanita muscaria; nicotine is found in tobacco.

Nicotinic acetylcholine receptors are ligand-gated ion channels permeable to sodium, potassium, and calcium ions. In other words, they are ion channels embedded in cell membranes, capable of switching from a closed to an open state when acetylcholine binds to them; in the open state, they allow ions to pass through. Nicotinic receptors come in two main types, known as muscle-type and neuronal-type.