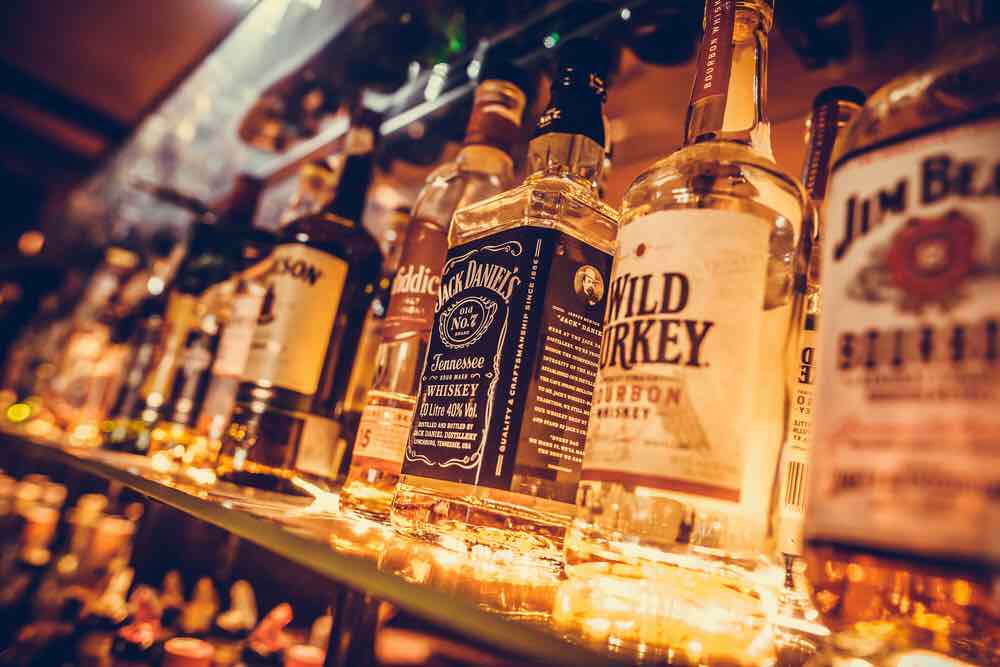 The term alcohol in common use refers to ethyl alcohol (C2H5OH).

It is a transparent, colorless, volatile liquid, having a characteristic spiritous odor and a burning taste. Absolute alcohol contains 99.95% alcohol; rectified spirit contains 90% alcohol, and industrial methylated spirit or denatured alcohol is a mixture consisting of alcohol 95% and 5% of wood naphtha.

Ethanol is produced by the fermentation of sugar by yeast.

Alcohol requires no digestion prior to absorption.

About 90% of alcohol absorbed is oxidized in the liver, and the remaining 10% is excreted.

In the liver, alcohol is oxidized to acetaldehyde by alcohol dehydrogenase (ADH) and its coenzyme, nicotinamide adenine-dinucleotide (NAD).

In the second step, acetaldehyde is transformed into free acetic acid or its activated form, acetyl coenzyme A. Finally the acetate enters the general pool, and undergoes oxidation to

C02 and water in the citric acid (Krebs) cycle.

When jerking movement is in the direction of the gaze and independent of the position of the head, it is known as alcohol gaze nystagmus

Incoordination in the fine and more skilled movements

Carefree, cheerful, ill-tempered, irritable, excitable, quarrelsome, sleepy, and so on.

Sense of touch, taste, smell, and hearing are diminished.

Nausea and vomiting are common.

The face is flushed and the pulse is rapid.

In this stage, the motor and sensory cells are deeply affected, speech becomes thick and slurring, coordination is markedly affected, causing the patient to become giddy, 'stagger and possibly to fall.

The person passes into a state of coma with stertorous breathing.

The pulse is rapid and temperature subnormal.

The pupils are contracted, but stimulation of the person, e.g. by pinching or slapping, causes them to dilate with slow return (Me Ewan Sign).

Death occurs from asphyxia due to respiratory paralysis, but it may occur from shock.

1) Evacuation of the stomach and bowel and gastric lavage with an alkaline solution usually causes a diminution in the symptoms.

2) The patient must be kept warm, and if there is congestion of the brain, ice bags should be applied to the head.

4) If the coma deepens, nerve stimulants, such as caffeine and strychnine should be used and artificial respiration, if there is difficulty in breathing.

5) Inhalation of oxygen is of great value.

On opening the cavities of the body, alcoholic odor is frequently noted.

Acute inflammation of stomach with a coating of mucus is commonly found.

The brain, liver and lungs are congested, and the smell of alcohol in the viscera may be noted.

The blood is usually fluid and dark.

Edema and congestion of the brain and meninges and cloudy swelling of parenchymatous organs are seen.

Death is caused either by the direct depressive effects upon the brain stem, mediated via the respiratory centre, or due to aspiration of vomit. Deaths due to acute overdose of alcohol are not common, but deaths due to the chronic effects of alcohol are common. Death with alcohol blood concentration below 400 mg% may occur in persons with chronic debilitating diseases , especially severe arterioscelerotic heart disease, pulmonary emphysema and varying degrees of hypoxia.

It occurs in alcohol intoxicated persons in the stage of coma, & results from pressure on a nerve trunk, as when an arm hangs over a chair (pressure on the radial nerve).

Drunkenness is a condition produced in a person, who has taken alcohol in a quantity sufficient to cause him to lose control of his faculties to such an extent, that he is unable to execute safely, the occupation in which he was engaged at the particular time.

This results from the long-continued action of the poison on the brain. It occurs in chronic alcoholics due to (1) temporary excess, (2) sudden withdrawal of alcohol, (3) shock after receiving an injury, such as fracture of a bone, or (4) from acute infection, such as pneumonia, influenza, erysipelas, etc.

It typically begins 72 to 96 hours after the last drink. There is an acute attack of insanity in which the main symptoms are Coarse muscular tremors of face, tongue and hands,

Uncontrollable fear and has tendency to commit suicide, Homicide or violent assault or to cause damage to property.