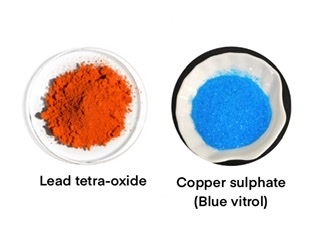 It is a heavy steel-grey metal. Metallic lead and all its salts are poisonous.

The principal salts which produce toxic effects are:

1) Gastric lavage with 1% solution of sodium or magnesium sulphate.

3) The combination of B.A.L. and calcium disodium versenate or DMSA is effective.

5) Calcium chloride 5 mg. of a 10 percent solution i.v. causes deposition of lead in the skeleton from the blood.

Porphyrinuria, mainly due to coproporphyrin Ill, is a valuable screening test. In the blood, levels above 0.07 mg percent, and in the urine 0.15 to 0.3 mg. per liter is diagnostic.

Signs of acute gastroenteritis are seen.

The mucosa of the stomach may be thickened and softened with eroded patches and may be covered with a grayish-white deposit.

1) Inhalation of lead dust and fumes by makers of white lead and makers and users of lead paints (the most common source of exposure for children), smelters, plumbers, glass-polishers, printers, enamel workers, glass blowers, etc.

2) Continuous absorption of minute amounts from drinking water stored in lead cisterns, from tinned food contaminated with lead from the solder, and from constant use of hair dyes and cosmetics containing lead.

3) Absorption through raw or intact skin.

4) Use of ghee stored in brass or copper .vessels lined inside with tin in which oleate of lead is formed and also by taking food cooked in the tinned vessel.

5) Absorption of vermilion applied to the scalp.

1) Facial Pallor: One of the earliest and most consistent sign. It seems to be due to vasospasm.

NiceToKnow - The anemia is probably due to decreased survival time of red blood cells and inhibition of heme synthesis by interference with the incorporation of iron into protoporphyrin.

Anemia which is associated with punctate basophilia, nucleated red cells (sideroblasts), and a decrease in platelets.

Punctate basophilia or basophilic stippling means the presence of many dark blue-colored pinhead-sized spots in the cytoplasm of red blood cells, due to the toxic action of lead on porphyrin metabolism.

A stippled blue line, called the Burtonian line, is seen on the gums in 50 to 70% of cases. It appears due to sub-epithelial deposit of granules at the junction with teeth, only near dirty or carious teeth, within a week of exposure, especially on the upper jaw.
It is due to the formation of lead sulphide by the action of hydrogen sulphide formed by decomposed food in the mouth.

Colic pain of the intestines, ureters, uterus, and blood vessels occurs in 85% of cases.

There may be tremors, numbness, hyperesthesia, and cramps before the actual muscle weakness.

6) Encephalopathy: Lead encephalopathy is said to be present in almost every case of plumbism.

The symptoms are vomiting, headache, insomnia, visual disturbances, irritability, restlessness, delirium, hallucinations, convulsions, coma, and death. Lead encephalopathy is usually irreversible and about 85% have permanent brain damage. Death occurs in about 25% of cases.

8) Reproductive System:
Menstrual derangements, such as amenorrhoea, dysmenorrhoea, menorrhagia, sterility of both sexes, and abortion are frequent. Abortion occurs in pregnant women between 3 to 6 months.

Retinal stippling is noticed by ophthalmoscopic examination showing the presence of greyish glistening lead particles in the early phase of poisoning.

3) X-ray evidence of increased radio-opaque bonds or lines at the metaphyses of long bones and along margins of the iliac crest is seen in children.

6) X-ray may show radio-opaque material in the G.l. tract if a lead is ingested during the preceding 36 to 48 hours.

1. Removal of the patient from the source of poison

5. For severe colic, atropine sulphate and or hot compression on the abdomen is useful.

To prevent chronic lead poisoning in factory workers, the following measures should be taken.

1) Maintenance of proper ventilation in factories.

2) Maintenance of personal hygiene of the workers and periodical medical examination.

Cause of Death in Lead Poisoning:

In acute poisoning, death is due to gastroenteritis and subsequent shock.

In chronic cases, all below be the direct causes.

Copper as a metal is not poisonous. Copper compounds are powerful inhibitors of enzymes.

There is a metallic taste, increased salivation, burning pain in the stomach with colicky abdominal pain, thirst, nausea, eructations, and repeated vomiting.

The vomited matter is blue or green.

There is diarrhea with much straining; motions are liquid and brown but not bloody.

In severe cases, hemolysis, hemoglobinuria, methemoglobinemia, jaundice, pancreatitis, and cramps of the legs or spasms and convulsions occur.

The breathing is difficult, and cold perspiration and severe headache occur.

In some cases, paralysis of limbs is followed by drowsiness, insensibility, coma, and death due to shock.

Later deaths occur due to hepatic or renal failure or both.

(1) Stomach wash with 1% solution of potassium ferrocyanide, which acts as an antidote by forming an insoluble cupric ferrocyanide.

(4) Hemodialysis is useful in the early stage of poisoning.

(5) Castor oil is given to remove poison from the intestines.

(6) Chelation with penicillamine or EDTA or BAL.

The skin may be yellow.

Greenish-blue froth may be present at the mouth and nostrils.

The gastric mucosa and stomach contents are greenish or bluish.

The gastric mucosa may be congested, swollen, inflamed, and occasionally eroded.

The liver may be soft and fatty.

Spontaneous hemolysis of blood and degenerative changes in proximal tubules of the kidney may occur.

It may occur in workers with the metal due to inhalation of dust or from food being contaminated with verdigris.

The presence of copper deposits in the tissues is called CHALCOSIS.

1) It is rarely used for homicide because of the color and taste.

(3) Accidental poisoning results from eating food contaminated with verdigris which is formed from the action of vegetable acids on copper cooking vessels that are not properly tinned on the inside. Ingestion of food to which copper has been added to keep the green color of the vegetable may cause poisoning. Children sometimes swallow copper sulphate attracted by its color.

(4) Sometimes, the salts are taken internally for abortion.

(5) Rarely it is used as a cattle poison.