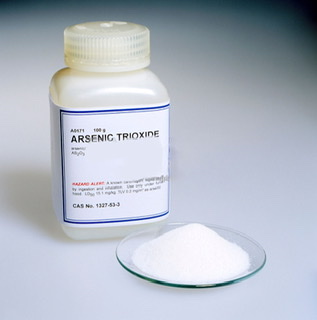 Q. Enlist a few poisons that can be absorbed through intact skin. [SUST - 17M]

Metallic arsenic (black colored) is not poisonous, as it is not absorbed from the alimentary canal. When volatilized by heat, arsenic unites with oxygen and forms a poisonous vapor of arsenic trioxide.

Cause death in 1-3 hours from shock and peripheral vascular failure.

All the capillaries are markedly dilated, especially in the splanchnic area with a marked fall of blood pressure.

Death is usually due to circulatory failure.

There is giddiness, formication (sense of insect crawling on the skin), and tenderness of the muscles

1. Emetics is not recommended.

The stomach should be emptied and then thoroughly and repeatedly washed by the stomach tube with a large amount of lukewarm water.

5. Penicillamine may be used with BAL

6. Laxative: Magnesium sulphate may be used.

8. Hemodialysis or exchange transfusion may be given in cases of renal failure.

The eyeballs are sunken and the skin is cyanosed. The body may be shrunken due to dehydration.

The mouth, pharynx, and esophagus are usually not affected, but in some cases are inflamed or ulcerated.

The lesions are mainly found in the stomach. The mucosa is swollen, edematous, and red either generally or in patches. There may be lines of redness running along the walls or curved lines of sub-mucous hemorrhages.

The small intestine appears flaccid and contains large flakes of mucus with very little fecal matter. The mucosa is pale-violet and shows signs of inflammation with sub-mucous hemorrhages along its whole length.

Sometimes, arsenic penetrates through the walls of the stomach and appears in the liver, omentum, and endocardium. If putrefaction has taken place, yellow streaks will be found in the sub-peritoneal layer of the stomach.

The liver, spleen, and kidneys are congested, enlarged, and show cloudy swelling and occasionally fatty change. The lungs are congested with sub-pleural ecchymoses.

There may be edema of the brain with patchy necrosis or hemorrhagic encephalitis. The meninges are congested.

It may be due to accidental ingestion of repeated small doses by those working with the metal, or by taking food or drink in which there are traces of the drug.

For Easy To Remember

Arsenic is popular homicidal poison because

2) Can be detected in completely decomposed bodies.

3) Can be found in bones, hair, and nails for several years.

4) Can be detected in charred bones or ashes.

It is a chronic condition arising from prolonged ingestion of arsenic above a safe dose for at least 6 months, usually manifested by characteristics skin lesions of & melanosis and or keratosis with or without the involvement of internal organs.

Arsenophagists:
Some people take arsenic daily as a tonic or as an aphrodisiac, and they acquire tolerance up to 0.3 g. or more in one dose. Such people are known as arsenophagists.

In death due to acute arsenic poisoning, arsenic values in the liver and blood in excess of one mg. % are usually present.

X-ray may show the presence of arsenic in the G.I. tract.

What is the result of ingestion of massive doses of arsenic? (Ref Selima Reza)

Death may occur due to shock, in this condition, gastrointestinal symptoms are absent. So, postmortem examination is insignificant. In chemical examination may be detected in the viscera.

In exhumations, the possibility of imbibition of arsenic from the stomach into neighboring viscera and also contamination from the surrounding earth should be remembered.

Arsenic absorbed during life is usually in soluble salt form.

Arsenic found in the soil is usually an insoluble salt. Keratin tissues absorb arsenic by contamination from outside. The concentration in hair and nails thus contaminated is likely to be much greater than the concentration of arsenic in the contaminating fluid.

If arsenic is introduced into the stomach after death, the transudation occurs into the organs of the left side before those of the right and the signs of inflammation and ulceration are absent.

DISTRIBUTION:
Arsenic is normally present in almost all tissues. It can appear in hair and nails within hours of ingestion. Estimates of the time of exposure can be made by measuring the distance of Mee's lines from the base of the nails or the length of hair from its growth site.