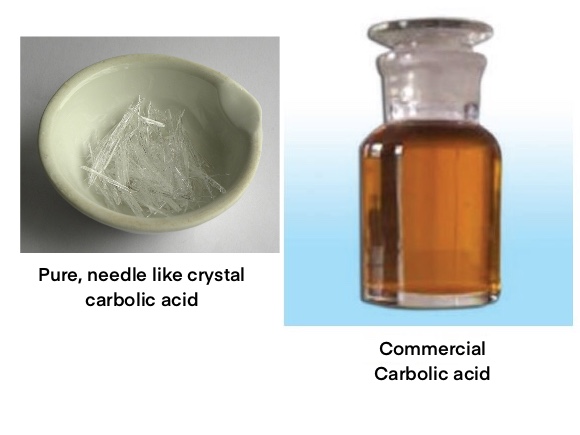 When pure, the acid consists of short, colorless, prismatic, needle-like crystals, which have a burning sweetish taste, which turn pink and liquefy when exposed to air.

It has a characteristic 'carbolic' or phenolic smell.

It is largely used as an antiseptic and as a disinfectant in various preparations.

Poisoning by carbolic acid is known as carbolism.

Phenol is converted into hydroquinone and pyrocatechol in the body before being excreted in the urine. A trace is excreted by the lungs, salivary glands, skin, and stomach. About 36 hours are required for complete excretion. It is partly detoxicated by the liver.

It is scanty and contains albumin and free hemoglobin; suppression may follow. It may be colorless or slightly green at first but turns green or even black on exposure to air. The further oxidation of hydroquinone and pyrocatechol in the urine is the cause of green coloration. This is known as carboluria.

In the body, phenol is partly oxidized to hydroquinone and pyrocatechol, which with unchanged phenol are excreted in the urine, partly free, and partly in unstable combination with sulphuric and glucuronic acids.

After carbolic acid poisoning, urine is suppressed or scanty and urine may be normal or slightly green at first, but turns green or even black on exposure to air. This symptom is called carboluria.

It is characterized by anorexia, weight loss, headache, vertigo, dark urine, and pigmentation of skin and sclera. Hydroquinone and pyrocatechol may cause pigmentation in the cornea and various cartilages, a condition called ochronosis.

1) An emetic often fails due to the anesthetic effect.

Soap solution or 10% glycerine may be used and the washing continued until the washings are clear and odorless. This is followed by the administration of olive oil or vegetable oil to remove surface phenol and prevent deep penetration.

3) When lavage is completed, 30 g. of magnesium sulphate or a quantity of medicinal liquid paraffin should be left in the stomach.

5) Saline containing 7gm of sodium bicarbonate per liter is given i.v. to combat circulatory depression, to dilute carbolic acid content of blood and to encourage excretion by producing diuresis.

6) Hemodialysis, if there is renal failure.

7) Methylene blue i.v., if there is severe methemoglobinemia.

8) If phenol falls on the body, contaminated clothing should be removed at once, skin washed with undiluted polyethylene glycol. If this is not available the area is washed with soap and water for at least 15 minutes. Olive oil, or methylated spirit, or ten percent solution of ethyl alcohol act as solvents.

A. When fall on the body

Contaminated cloth should be removed at once.

Skin surface should be thoroughly washed with soap & water.

1) An emetic often fails due to the anesthetic effect.

2. Stomach wash with plenty of lukewarm water containing magnesium or sodium sulphate is used OR soap solution or 10% glycerine in water until washing are clear and odorless.

3) When lavage is completed, 30 g. of magnesium sulphate or a quantity of medicinal liquid paraffin should be left in the stomach.

5) Saline containing 7gm of sodium bicarbonate per liter is given i.v. to combat circulatory depression, to dilute carbolic acid content of blood and to encourage excretion by producing diuresis.

6) Hemodialysis, if there is renal failure.

Corrosion of the skin, especially in tracks from the angles of the mouth on to chin, has a grayish or brown color.

The tongue is usually white and swollen, and there is a smell of phenol in the mouth.

The mucous membrane of the lips, mouth, and throat is corrugated, sodden, whitened, or ash-grey and partially detached with numerous small sub-mucous hemorrhages.

The mucosa of the esophagus is tough, white or grey, corrugated.

The stomach mucosal folds are swollen and covered by opaque, coagulated, grey or brown mucous membrane.

The stomach may contain a reddish fluid mixed with mucus and shreds of epithelium and smells of phenol.

The liver and spleen usually show a whitish, hardened patch where the stomach has been in contact with them due to the transudation of phenol.

If vomit or poison has been inhaled, coagulation necrosis of the mucosa and severe congestion of the submucosa of the air passages may be seen. Laryngeal and pulmonary edema also occur.

The kidneys show hemorrhagic nephritis in cases of delayed death.

The brain is congested, maybe edematous.

The blood is dark and semifluid or only partially coagulated.

(a) failure of respiration,

(b) edema of glottis,

1) It is used for suicidal purposes.

3) It is rarely used for homicide because of its odor and taste. 4) It is sometimes injected into the vagina and uterus to produce abortion.

Corroded: Destroy or weaken (something) gradually. Like a rusting appearance.