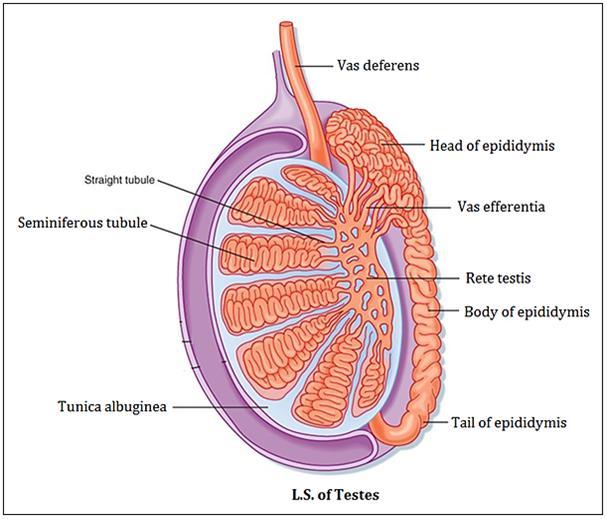 It is a male gonad. It is homologous with the ovary in the female.

Functions of the testis:

There are 3 coverings of the testis. From superficial to deep:

Cells in the testis:

Some veins appear from the posterior border of the testis and epididymis, and unite to form a "PAMPINIFORM PLEXUS"

The lymph vessels from the testis ascend along the testicular vessels in the spermatic cord and drain into pre-aortic and para-aortic lymph nodes.

Hydrocele: It is the accumulation of the fluid within the tunica vaginalis.The fluid may cause inflammation of the testis.

Varicocele: It is a clinical condition in which veins of the pampiniform plexus become dilated, tortuous and elongated. It commonly affects adolescents and young adults.

The testis develops in the abdominal cavity on its posterior wall from the mesodermal "GENITAL RIDGE".

All the components of the testis {tunica albuginea, fibrous septa, seminiferous tubules, straight tubules, rete testis, and Sertoli cells} develop from the genital ridge except primordial germ cells (spermatogonia) which develop from the wall of the yolk sac.

The testis develops in the lumbar region on the posterior abdominal wall. Later they descend through the pelvis and inguinal canal during the 7th and 8th months of fetal life.

Factors responsible for descent of the Testis