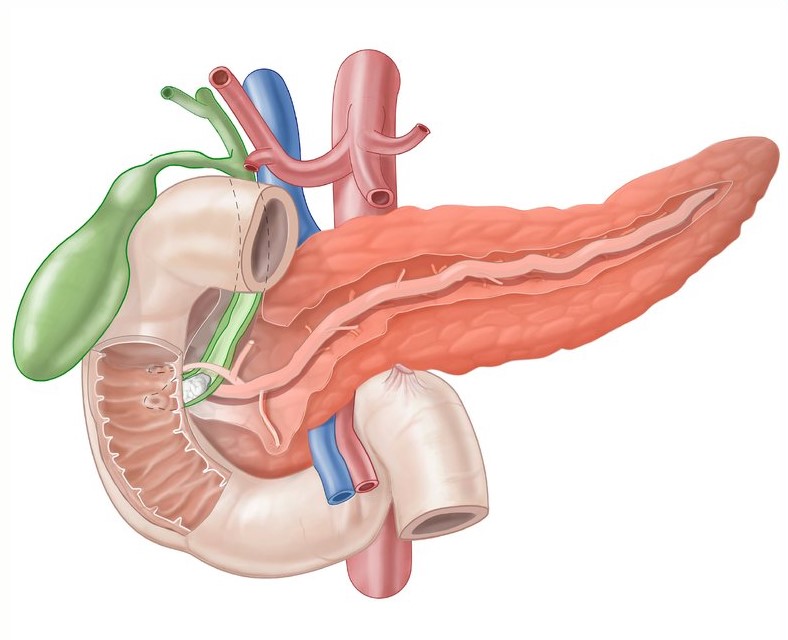 The pancreas is a soft lobulated gland, consisting of both exocrine and endocrine parts with very little connective tissue.

Situation: It occupies the posterior part of the epigastrium and left hypochondrium.

Structure of the pancreas:

The Exocrine part of the pancreas is a compound racemose gland & is devoid of a definite fibrous capsule. The intercalary duct is lined by flattened epithelium. The junction between the alveolus & the duct is lined by cubical cells which are known as centro-acinar cells.

The Endocrine part of the pancreas is composed of numerous islets of Langerhans. About one million or more islets are found in the human pancreas & they are more numerous in the tail.

There present 4 types of major cells:

Two minor cell types are also found in the periphery of the islets cell mass:

Junction between head and neck In front, separated by the groove for gastro-duodenal artery and behind, by the right margin of the groove for the portal vein.

Junction between body and tail - In front, not distinguishable; behind, separated by the junction of peritoneal and non-peritoneal areas.

Description of the parts:

HEAD: It is enlarged and lies at a lower level than the body, opposite L1 and L2 vertebrae.

Uncinate process: It is a triangular projection that arises from the lower and left parts of the head.
It is related -

Relation of the anterior surface of the Head:

Relation of the posterior surface of the head:

It is non-peritoneal and related to the-

NECK: It connects the head with the body and is about 2 cm long. It presents-

Posterior relation of the neck-

It is non-peritoneal and presents a shallow groove that contains a superior mesenteric vein in the lower part and a trunk of the portal vein in the upper part.

Relation of the posterior surface of the body-

It is non-peritoneal and related with-

Close to the right and presents a conical projection known as tuber omentale.

It gives attachment to the root of the transverse mesocolon.

Superior mesenteric vessels emerge under the cover of the right end of this border.

TAIL: It is the most mobile part of the gland. It passes between the layers of the lieno-renal ligament and reaches the spleen and lies opposite the lower border of T12 vertebrae.

Head and Neck of the pancreas are supplied by the ventral and dorsal anastomosis of superior and inferior pancreatico-duodenal arteries.

Body and tail are supplied by the pancreatic branches of the splenic artery.

These correspond to the arteries and drain into the superior mesenteric, splenic & into the trunk of portal veins.

Parasympathetic: Derived from both vagus nerves.

The pancreas is developed in two parts, Dorsal & Ventral.

Dorsal bud: Whole of the neck, body, and tails of the pancreas, and the upper part of the head are developed from here.

Ventral bud: Lower part of the head & uncinate process are developed from here.