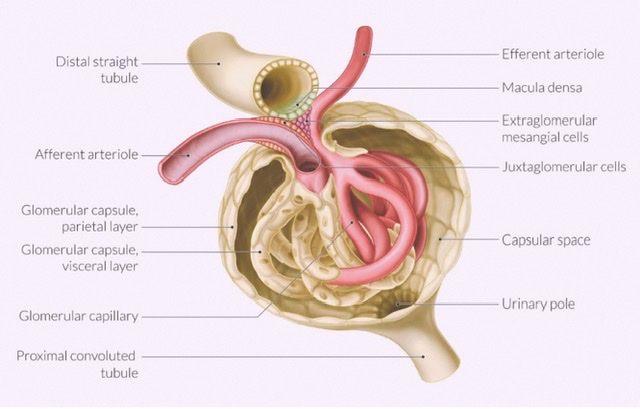 Location of the kidney

Either side of the vertebral column, from T12 to L3 vertebrae.

Situated in the left hypochondrium, epigastric and umbilical region.

The right kidney is slightly lower in position due to its relationship with the liver.

Functions of the kidney

Presenting parts of the kidney

What factors keep the kidneys in position?

What are the coverings of the kidneys?

Fibrous capsule is formed by condensation of the fibrous stroma of peripheral of the kidney. The capsule covers the entire organ, lines the renal sinus, and is reflected as a tubular sheath around the minor and major calyces and pelvis of the ureter.

Para nephric fat lies between the interval of renal fascia and the anterior layer of thoraco-lumbar fascia. It is abundant on the Posterior surface.

It is formed by condensation of fibro-areolar tissue surrounding the kidneys and perinephric fat.

It has two layers:- anterior and posterior deposition of renal fascia

Relations of the anterior surface of the kidney

It is partially covered with the peritoneum, the relations differ between right and left kidneys

Relations of the posterior surface of the kidney

The posterior surface is entirely non-peritoneal.

What is hilum? Name its contents.

It is a deep vertical fissure at the central area of the medial border, bounded by anterior and posterior lips. At the level of the L1 vertebra

Structure of the kidney

It can be classified into two ways:

Renal sinus is the space within the kidney lined by the renal capsule. It contains:-

What is the pelvis of the ureter?

It is a funnel-shaped dilation of the ureter, formed by the union of major calyces. It extends from the renal sinus through the hilum to the caudal pole of the kidney where it is continuous with the abdominal part of the ureter.

Artery supply of the kidney

Venous drainage of the kidney

Each kidney is drained into the inferior vena cava by the corresponding left and right renal vein.

Lymphatic drainage of the kidney

Nerve supply of the kidney

Sympathetic renal plexus arise from the T10-L1 segment of the spinal cord. Sympathetic helps in vaso-motor and stimulates the juxta-medullary cells to release renin.

Parasympathetic renal nerves are derived from both vagus nerves.

Development of the kidney

The matured kidneys are developed from the intermediate mesoderm in the craniocaudal direction. It has three stages:

a) At first, pronephros develops.

b) Pronephros is then replaced by mesonephros.

1) Lobulated kidney: Results from the persistence of fetal lobulation.

2) Pelvic kidney: Due to failure of the ascent of the kidney.

3) Horse-shoe shaped kidney: Due to non-union of the two metanephric blastema across the midline.

4) Unilateral double kidney: Two kidneys on the same side.