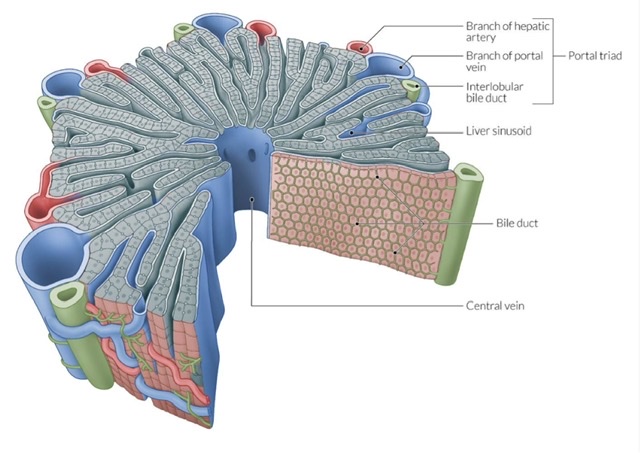 The liver is the largest gland of the body.

This is the viscera of the liver with the gall bladder.

Why liver is called a mixed gland?

Because the liver consists of both exocrine and endocrine parts.

It synthesis the serum proteins & lipids.

It produces hemopoietic cells of all types during fetal life.

Why is the liver much larger in children?

Due to hematopoietic function in fetal life, and occupies about 2/5th of the abdomen.

What is the basic tissue of the liver?

What will happen if we cut down the 2/3rd portion of the liver?

It will regenerate itself because the cells of the liver are stable cell (or Ito cell) which has regeneration capability.

Supports of the liver:

Ture ligament is derived from the remnants of the embryological structures.

False Ligament is formed from the fold of the peritoneum.

External features of the Liver:

But it can be categorized altogether on 5 surfaces.

On the diaphragmatic surface:

The liver is divided into 2 right & left lobes by the attachment of the Falciform Ligament.

On the visceral surface:

Liver is divided into right & left lobes by the fissures for ligamentum teres hepatis, ligamentum venosum.

On the diaphragmatic surface:

The liver is divided into right & left lobes from the line passing from the little right of the attachment of falciform ligament.

Liver is divided into right & left lobes from the imaginary line passing from the center of the groove of the inferior vena cava and fossa of the gallbladder (Cholecysto-venacaval Line).

What is Porta Hepatis?

It is a transverse non-peritoneal fissure & acts as a gateway of the liver.

Structures emerging out of porta hepatis :

What are the contents of the portal triad?

The areas which are not covered by the peritoneum are:

The bare area of the liver (non-peritoneal area) is a large triangular area on the diaphragmatic surface of the liver, devoid of peritoneal covering.

Why bare area of the liver is called "The Bare Area"?

Because it is the largest non-peritoneal area of the liver.

Importance of the bare area

It is devoid of peritoneum so it directly comes into contact with the diaphragm which separates it from the right pleural sac.

Why there remain a concavity between two convex parts on the superior surface of the liver?

What do you mean by portosystemic Anastomosis?

What are the sites of portosystemic anastomosis?

How is the Nutrition of the liver maintained?

How the inferior vena cava is formed?

By the union of right and left common iliac vein at the level of the 5th lumbar vertebra.

How portal vein is formed?

By the union of superior mesenteric vein and splenic vein behind the neck of the pancreas at the level of Lumbar 2 vertebra.

What is the importance of the right lateral surface of the liver?

Needle biopsy of the liver is approached through the 9th or 10th intercostal spaces at the mid-axillary line during forced expiration in order to avoid injury to the lung.

Biliary apparatus: The biliary or excretory apparatus of the liver includes the passage through which hepatic bile and gall bladder bile are conveyed into the second part of the duodenum.

Histological structure of the liver

What is hepatic lamina?

When 20 sheet hepatocytes arrange in a radiating manner, it is known as the hepatic lamina.

What is hepatic lacuna?

The space between two hepatic laminae is called hepatic lacuna.

What is the space of Disse?

Between the walls of the sinusoid and hepatic laminae of cells there exist e potential space called space of Disse.

What is the Space of Mall?

Spaces of Mall are the potential spaces that appear in the interlobular spaces between the Glisson's capsule of the portal canal and the hepatic plates of the cell.

What are the events that occur in the sinusoid?

What are the other side of the sinusoid rather than the liver?

The lymph which produces in Space of Mall contain higher plasma protein. That's why the liver contains it more.

What is the origin of the hepatic vein? Intrahepatic or Extrahepatic?

Ventral wall of the endoderm of the foregut.