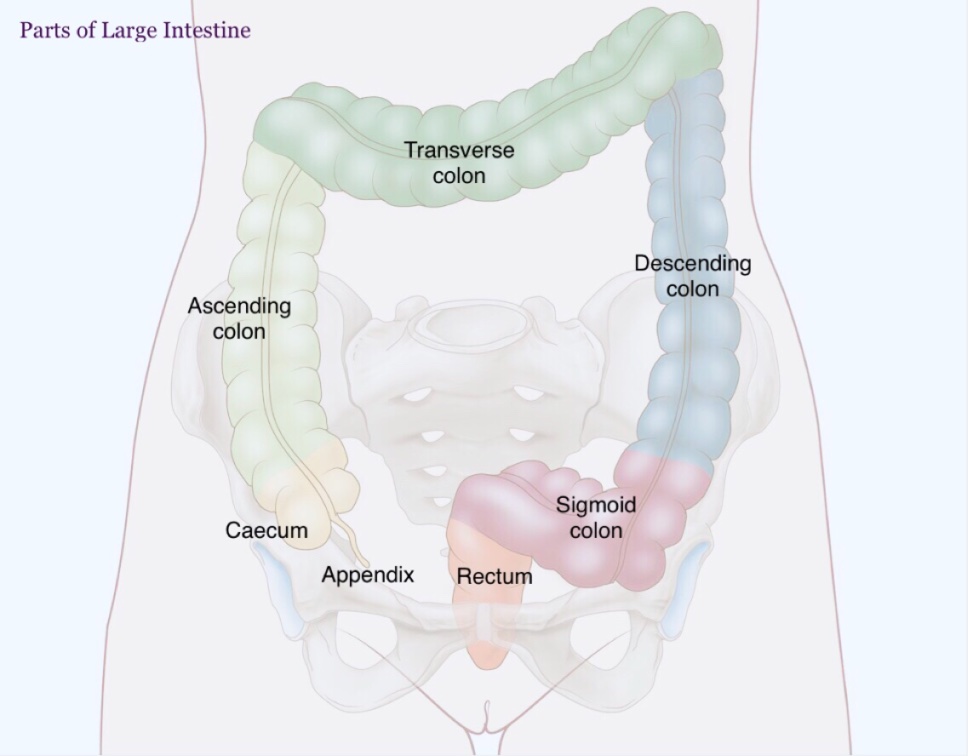 Extension: From the caecum in the right iliac fossa to the anus in the perineum.

Parts: It has four parts:

The colon is further divided into four parts:

These are three ribbon-like bands of the longitudinal muscle coat.

Positions of teniae in ascending colon are

But in the transverse colon, the corresponding positions are inferior, posterior, and superior, respectively.

These are a series of pouches/dilatations in the wall of the caecum and colon between the teniae.

The sacculations are responsible for the characteristic puckered appearance of the large intestine.

The caecum is the large dilated blind sac at the commencement (proximal end) of the large intestine.

The ascending colon is an upward continuation of the caecum.

Extension: From the caecum, at the level of the ileocaecal orifice, to the hepatic (right colic) flexure.

The most mobile part of the large intestine.

Extension: From the left colic flexure to the front of the left external iliac artery at the level of pelvic brim where it becomes continuous with the sigmoid colon.

Extension: From the lower end of descending colon at the left pelvic inlet to the pelvic surface of the third sacral vertebra where it becomes continuous with the rectum.

Rectum:
It is the continuation of the sigmoid colon at the level of sacral 3 vertebrae.

It has 2 types of curvature

Posteriorly: Same in males and females

Interior of the rectum:

They are the site of portosystemic anastomosis

The terminal portion of the large intestine below the pelvic diaphragm

What is a hemorrhoid (Piles)?

Peritoneal Relations of Large Gut:
All the parts of the large intestine are retroperitoneal & fixed except the appendix, transverse colon & sigmoid colon which are intraperitoneal and possess mesenteries.

Functions of the large intestine

Difference between the Rectum with the rest of the Large Intestine.