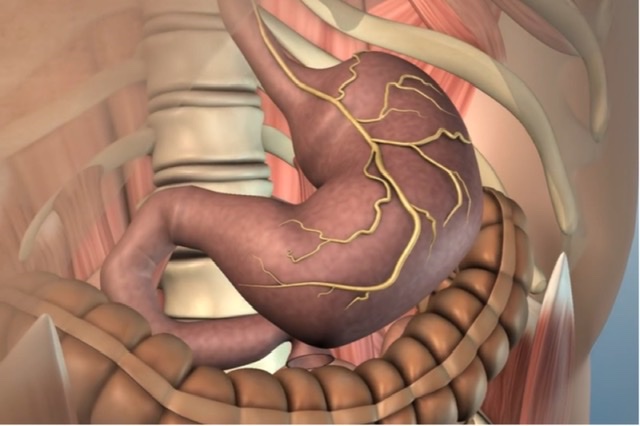 Stomach is the widest and most distensible part of the alimentary canal between the esophagus and the duodenum.

How to distinguish between cardiac orifice & pyloric orifice?

The circular muscle of the stomach thickened to form a pyloric sphincter.

The stomach is covered by the peritoneal except

Because greater omentum Wraps an inflamed organ and prevents the spread of infection to the general peritoneal cavity.

1. Relations of the anterior surface:

From the outside inward,
Serous,
Muscular,
Submucous,
Mucous coats

Glands are always present in Lamina Propria except Brunner's gland of Duodenum, which is present at sub-mucosa.

Lining epithelium of the stomach

INTERIOR OF THE STOMACH

When the stomach is cut open, the interior of the stomach presents the following features.

How gastric canal is formed?

It is produced due to the contraction of the right free margins of the oblique muscle.

What is the importance of a splenic artery as a tortuous artery?

It allows the distention of the stomach and helps in well circulation of blood.

Why stomach is supplied by the branches of the coeliac trunk?

The sympathetic fibers are derived from T6 to T10 spinal segments via greater splanchnic nerves, and coeliac and hepatic plexuses.

The sympathetic supply to the stomach is
a) vasomotor
b) motor to the pyloric sphincter, and inhibitory to the remaining gastric musculature, and
c) serves as the Chief pathway for pain sensations from the stomach.

The parasympathetic fibers are derived directly from the vegas nerves.

Gastric carcinoma:
Commonly occurs along the greater curvature of the stomach as the maximum of the lymphatic vessels passes through this area to drain into pancreatico-splenic lymph node.

Gastric Ulcer:
Commonly occurs along the lesser curvature due to the presence of gastric canal through which liquid substance of food flows directly along with it.

Importance of Gastric Triangle:
If an esophageal obstruction occurs, a small tube passes through the gastric triangle for feeding to the patient.