Cell is defined as the structural and functional unit of a living body. 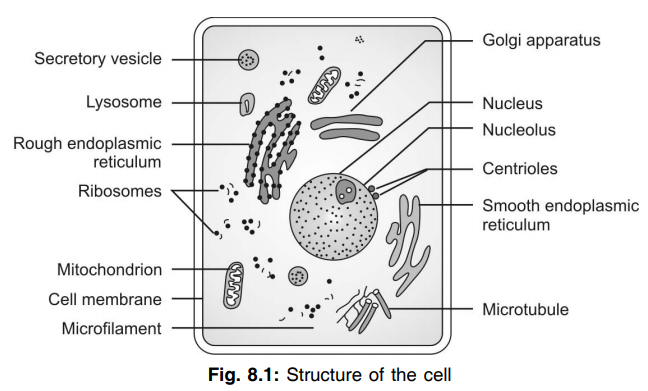 Q.2 What is the composition of the cell membrane?

Q.3 Name the structural models of the cell membrane. Mention the accepted one.

Q.4 What are the layers of the cell membrane? 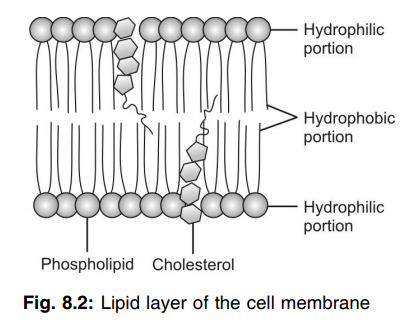 Q.5 What is the characteristic feature of the lipid layer of the cell membrane? What is its advantage?

Q.6 Name the types of proteins present in the cell membrane.

Q.7 What are the functions of proteins in the cell membrane?

Q.8 Name the carbohydrates present in the cell membrane.

Q.9 What is the functional importance of carbohydrates in the cell membrane?

Q.10 Name the cytoplasmic organelles which are bound with limiting membrane.

Q.11 Name the cytoplasmic organelles which are not bound with limiting membrane.

Q.12 What is the endoplasmic reticulum?

The endoplasmic reticulum is the interconnected network of tubular and microsomal vesicular structures in the cytoplasm.

Q.13 Name the types of endoplasmic reticulum. Mention the function of each.

• Rough or granular endoplasmic reticulum – to which the ribosomes are attached.
It is concerned with:

• Smooth or a granular endoplasmic reticulum—to which the ribosomes are not attached. It is concerned with:

Q.14 What are the functions of the Golgi apparatus?

Processing, packing, labeling, and delivery of proteins and lipids.

Q.15 What are the functions of lysosomes?

Q.16 What are the lysozymes?

Lysozymes are the hydrolytic enzymes present in lysosomes.

Q.17 What are peroxisomes and what are their functions?

The other name of mitochondrion is the ‘powerhouse’ of the cell.

Q.19 What are the functions of ribosomes?

The cytoskeleton of the cell is a complex network of structures in various sizes present throughout the cytoplasm. Protein components of cytoskeleton:

Q.21 What are the functions of the cytoskeleton?

Cytoskeleton is concerned with:

Q.22 What are microtubules? What are their functions?

Microtubules are tubular organelles without limiting membrane present in the cytoplasm. These tubules are formed by the tubulin molecules.

Q.23 What are microfilaments? What are their functions?

DNA (deoxynucleic acid) is a nucleic acid present in the nucleus and mitochondria of cells.

RNA is of three types:

A gene is a portion of a DNA molecule that contains the message or code for the synthesis of a specific protein from amino acids.

Transcription is the copying of genetic code from DNA to RNA. Translation is the process by which protein synthesis occurs in the ribosome of the cell under the direction of genetic instruction given by mRNA.

Growth factors are proteins that act as cell signaling molecules like cytokines and hormones.

Apoptosis is the programmed cell death under genetic control.

Necrosis is the uncontrolled and unprogrammed death of cells due to unexpected and accidental damage.

The cell junction is the connection between the neighboring cells or the contact between the cell and the extracellular matrix.

Q34 What are the proteins present in tight junctions?

Q.35 What are the functions of tight junction?

Q.36 What are connexons or connexins?

Connexons or connexins are the protein subunits present in gap junctions.

Q.37 What are the functions of gap junction?

Q.39 What are the types of passive transport or diffusion?

Q.41 Name the factors affecting the diffusion of substances across the cell membrane.

Co-transport: In this, along with the primary substance like sodium, the carrier protein carries another substance. Substances like glucose and amino acids are transported by this method

Q.44 What is bulk flow? Give example.

The movement of a large number of molecules of a substance in bulk along the concentration gradient is known as bulk flow. An example is the diffusion of respiratory gases across the respiratory membrane.

Endocytosis is the process by which the larger molecules (which cannot enter the cell by means of active or passive transport) are transported into the cell. Endocytosis is of two types: pinocytosis and phagocytosis.

Q.46 What is pinocytosis? Give example.

The movement of larger particles by means of evagination of the cell membrane is called pinocytosis. It is otherwise known as ‘cell drinking’.

Q.47 What is phagocytosis? Give example.

The process by which the particles larger than the macromolecules are engulfed into the cells is called phagocytosis. It is also known as ‘cell eating’.

Example: Transport of larger bacteria, larger antigens, and other larger foreign bodies inside the cell.

The maintenance of a constant internal environment is known as homeostasis.

Q.50 What are the mechanisms involved in the homeostatic control system? Explain them briefly.

The homeostatic control system is mainly by the feedback mechanisms:

The pH is the expression of hydrogen ion concentration.

Q.53 How is the pH of ECF and plasma determined?

To determine the pH of ECF, the concentrations of bicarbonate ions and carbon dioxide dissolved in the fluid are measured. The pH is calculated by using the Hendersön-Hasselbalch equation. The pH of plasma is determined by pH meter.

Q.54 What are the mechanisms which regulate acid-base balance?

Q.55 What are the buffer systems in the body?

Q.55 What is the basic mechanism involved in the regulation of acid-base balance by the respiratory system?

Q.57 What is the basic mechanism involved in the regulation of acid-base balance by the kidney?

The kidney regulates acid-base balance by secretion of hydrogen ions and retention of bicarbonate ions.

Q.58 What are the disturbances of acid-base status?

Respiratory acidosis that occurs during respiratory disturbances. This is due to the increase in the partial pressure of carbon dioxide above 60 mm Hg in the arterial blood.

Metabolic acidosis that occurs during metabolic disturbances. It is due to the excessive accumulation of organic acids like lactic acid, acetoacetic acid, and beta hydroxyl butyric acid.

Respiratory acidosis occurs in conditions leading to hypoventilation like:

Q.62 What are the types of alkalosis? Explain briefly.

Hyperventilation is the primary cause of loss of excess carbon dioxide from the body leading to respiratory alkalosis. Hyperventilation occurs in hypoxic conditions, cerebral disturbances, and psychological and emotional trauma.

Metabolic alkalosis is due to loss of excess hydrogen ions that occurs in:

Q.65 The intracellular fluid has more sodium content than potassium. Is this statement correct?

No, it is the other way around, i.e. intracellular fluid has more potassium content than sodium.

Q.66 Give a brief description of the chromosome.

Q.67 What is the number of chromosomes in somatic cells of human being?

There are 46 number of chromosomes, i.e. 22 pairs of somatic chromosomes and one pair of sex chromosomes.

Q.68 What is the difference between mitotic and meiotic cell division? 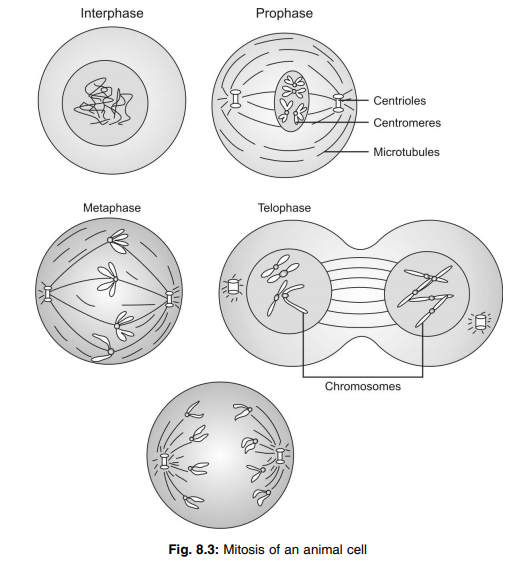 Q.69 Name the various phases in the mitotic division of a cell.

These are interphase, prophase, metaphase, cleavage stage, anaphase, and telophase.