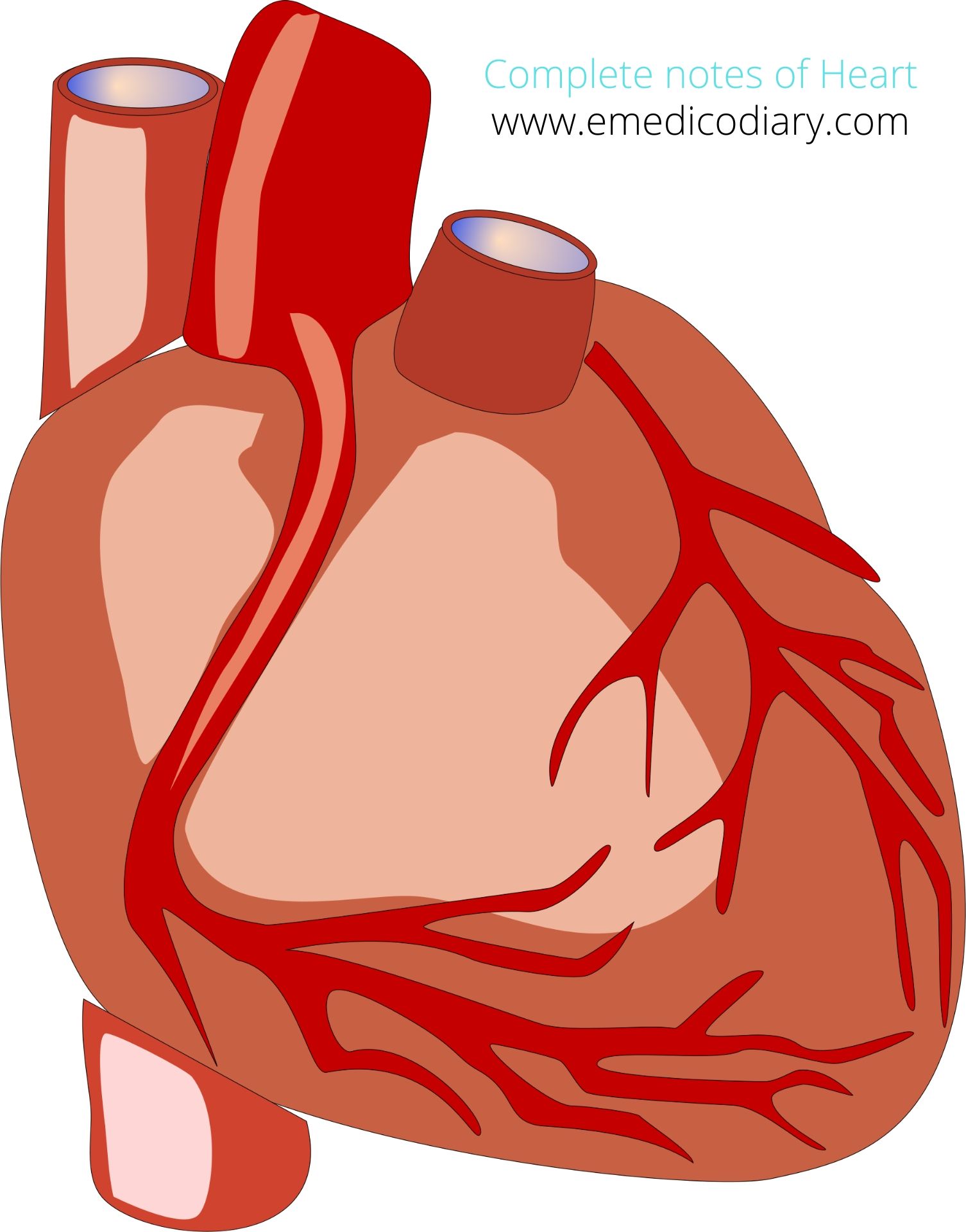 It consists of four chambers:

It have the following features:

The apex of the heart

The base of the heart

The surface of the heart

Borders of the heart

Chambers of the heart

the boundary of chambers of the heart on the surface

It is demarcated by three grooves/sulci

Internal features of the right atrium

It is divided into two parts

Opening into the right atrium

It has no valve

It is guarded by tricuspid valve

These are the opening of vanae cordis minimae and anterior cardiac veins.

The internal structure of the right atrium

It has two parts

differentiate   between the inflowing and outflowing  part of the right ventricle

These are the muscular projection that gives the ventricular chamber a spongy like appearance.

these represent the pillars of the trabeculae. The papillary muscle project inward. Their bases are attached to the ventricular wall and their apices are connected by thred-like fibrous cord to the cusps of the tricuspid valve.

It is a thick muscular ridge extending from ventricular septum to the base of the anterior papillary muscle, across the ventricular cavity. It prevents the overdistension of the right ventricle.

It forms a greater part of the base of the heart.

Its upper end is prolonged to form left auricle.

The interior of the left atrium is smooth but the left auricle posses muscular ridges.

It is a thick-walled chamber

The papillary muscle of the left ventricle is attached to the cusps of the mitral valve by chordate tendine.

Conducting system of the heart

The conducting system of the heart is made up of specialized cardiac muscle fiber and nervous tissue. This is responsible for the initiation and conduction of cardiac impulses.

Right and left branches of bundle of His

Blood supply to the heart

Arterial supply of the heart:

The right coronary artery origin from anterior aortic sinus. After arising from ascending aorta it runs forward behind the pulmonary trunk to the right anterior coronary sulcus. Then it reaches up to the junction of the right and inferior border of the heart. Then it turns posteriorly to posterior interventricular groove and terminates by anastomosing with left coronary artery.

Circumflex artery wind around the left margin and continues in the left posterior coronary sulcus up to the posterior IV groove where it terminates by anastomising with the right coronary artery.

Anastomoses and its importance

It is the point of attachment of two coronary arteries, left and the right coronary artery. It helps in the collateral circulation of the blood if occlusion occurs.

The coronary sinus is the largest vein of the heart lies in the posterior part of the AV groove. It develops from the left horn of sinus venusus. It is 3 cm long which opens into the posterior wall of the right atrium.

Tributaries of the coronary sinus

Pain and reflex pathway of the heart