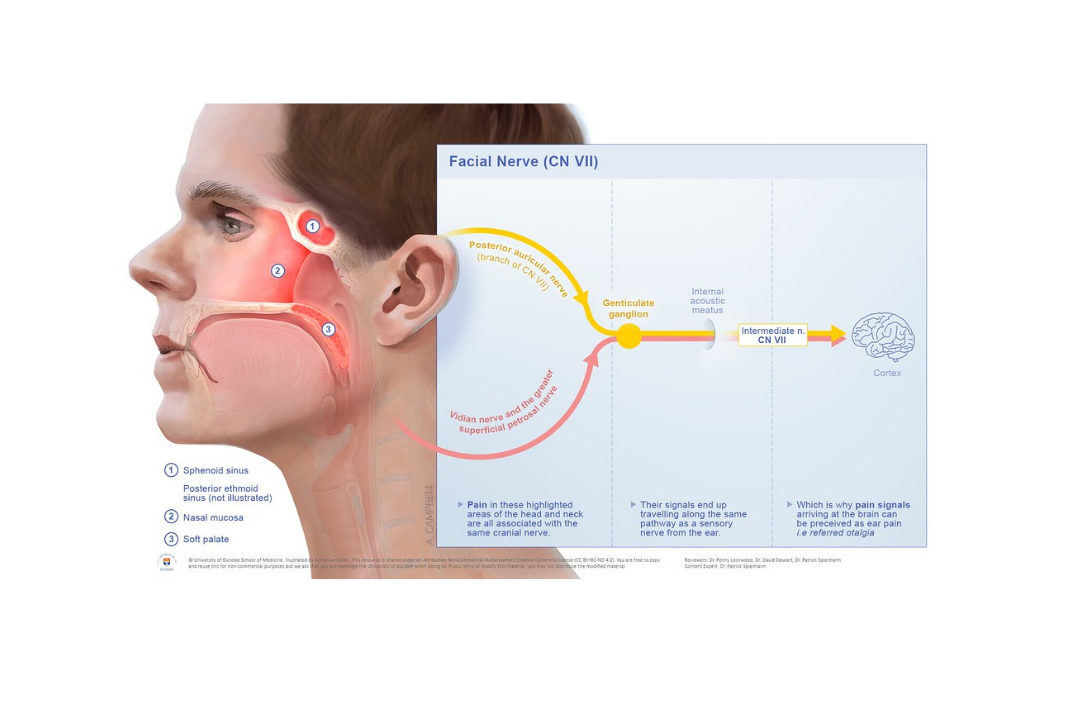 Q.1 What is the origin of facial nerve?

By two roots in the lateral part of the groove between the lower border of pons and the upper border of the medulla.

Q.2 What are the functional components of the facial nerve?

Special visceral efferent:
Motor to muscles of facial expression and elevation of the hyoid bone, which arise from the mesoderm of the second branchial arch.

Q.3 What is nervus intermedius?

Sensory root of the facial nerve because it is attached between the motor root (medially) and vestibulocochlear nerve (laterally).

Q.4 What is the position of geniculate ganglion?

It is present in the course of facial nerve through the substance of petrous temporal bone.

Q.5 What is the position of the facial nerve nucleus?

In reticular formation of pons, medial to the spinal nucleus of the trigeminal nerve.

Q.6 What is the position, connections, and branches of pterygopalatine ganglion?

It is the peripheral autonomic ganglion of the cranial parasympathetic outflow.

Position:
Present in the pterygopalatine fossa and is suspended from the maxillary nerve by two ganglionic branches.

– Sensory root: From the maxillary nerve several branches pass through it without relay.

– Secretomotor fibers to lacrimal gland and glands of nasal and palatine mucosa from postganglionic fibers of nerve of pterygoid canal.

– Sensory root: From palate, nose, and pharynx. Taste fibers from the soft palate.

Q.7 What is the position, connections, and branches of submandibular ganglion?

It is a peripheral autonomic ganglion of the cranial parasympathetic outflow.

Position:
It lies over the hyoglossus muscle suspended from the lingual nerve by two or more roots.

– Blood vessels of submandibular and sublingual glands by sympathetic plexus.

Q.8 What are the branches of facial nerve and structures supplied?

Supplies:
– Secretomotor fibres to submandibular and sublingual glands.
– Carries taste sensation from anterior 2/3 of the tongue.

– Posterior auricular: Supplies auricularis posterior, occipitalis, and intrinsic muscles on the back of the auricle.

– Temporal branches: Supply auricularis anterior and superior, intrinsic muscles on the lateral side of the ear, frontalis, orbicularis, and corrugator supercilli.

– Mandibular branch: To muscles of lower lip and chin.

– Communicating branches: To trigeminal and vagus nerve to supply part of the skin of auricle.

It is the infranuclear lesion of the facial nerve, in which the whole of the face is paralyzed on the same side. The face becomes asymmetrical and is drawn to the normal side.

Q.10 Why in the supranuclear lesion of the facial nerve, only the lower part of the face is paralyzed?

Q.1 Name the nuclei of origin of the vestibulocochlear nerve.

Q.2 What are the parts of the VIII cranial nerve?

Second-order neuron:
Neurons in cochlear nuclei.
Axons of these pass to the dorsal part of the pons and most of them cross to the opposite side. The crossing fibers of two sides form a trapezoid body. These end in the superior olivary complex.

Third-order neuron:
Arise from the superior olivary complex and form an ascending bundle called lateral lemniscus and end in the inferior colliculus of the midbrain from which fibers reach the medial geniculate body.
From it, acoustic radiations pass to the acoustic area of the cerebral cortex (Area 41,42) via the sublentiform part of the internal capsule. The fibers from the superior olivary complex also reach dorsal and ventral cochlear nuclei of the inferior cerebellar peduncle.

Receptor: Hair cells in the macula of saccule, utricle, and crista of ampullae of semicircular canals.

Q.4 Why the unilateral injury to the cochlear nerve do not greatly affect auditory acuity?

Because auditory radiations to the cortex are bilaterally distributed.

Q.5 What is the effect of the lesion of the vestibular nerve?

Q.1 Name the functional components of the IX cranial nerve.

Special visceral efferent:
Motor to stylopharyngeus. This muscle develops from the mesoderm of the third branchial arch

General visceral afferent:
Sensory to the mucous membrane of the pharynx, tonsil, soft palate, and posterior 1/3 of the tongue.

Special visceral afferent:
Taste sensation from posterior 1/3 of the tongue.

General somatic afferent:
Proprioceptive impulses from stylopharyngeus and skin of the auricle.

Q.2 Name the nuclei of origin of the ninth nerve?

Q.3 What are branches of the IX cranial nerve?

Q.4 What is the position, connections, and branches of otic ganglion?

It is a peripheral autonomic ganglion of the cranial parasympathetic outflow.

Position:
Present just below the foramen ovale medial to the trunk of the mandibular nerve. It is connected to the nerve to the medial pterygoid muscle.

– Sympathetic root: From plexus on middle meningeal artery and pass through ganglion without relay.

– Motor root: Through nerve to medial pterygoid, branch of mandibular nerve and pass through ganglion without relay.

– Secretomotor fibers to the parotid gland via a branch connecting otic ganglion to the auriculotemporal nerve, which itself gives a parotid branch.

Q.1 Name the functional components of the X cranial nerve.

Q.2 Name the nuclei of the vagus nerve.

Q.3 Name the ganglia on the vagus and what are their connections.

Superior ganglion: In jugular foramen. Connected to IX and XI nerves and Superior cervical ganglion of the sympathetic chain.

Inferior ganglion: Near base of skull. Connected to XII nerve, superior cervical ganglion, and Loop between C1 and C2 nerves.

Q.4 Name the branches of the vagus. What are the structures supplied by these?

Q.5 What is the effect of the lesion of the vagus nerve?

Q.1 Name the roots of the accessory nerve.

Q.2 Where do the roots of accessory nerve arise?

Q.3 What is the functional component of the IX cranial nerve?

Q.4 How does the spinal root enter the cranial cavity?

The spinal rootlets of the accessory nerve unite to form a trunk which ascends in the vertebral canal and enters the cranial cavity through the foramen magnum.

Q.6 What is the distribution of the cranial accessory nerve?

Q.7 What is the distribution of the spinal accessory nerve?

It supplies the sternomastoid and trapezius muscles.

Q.8 What will be the effects of a complete lesion of the spinal accessory nerve?

There will be paralysis of the sternomastoid and trapezius muscles (lower motor neuron type of paralysis).

Q.1 What is the position of the hypoglossal nucleus?

It is present in the medulla extending into both open and closed parts of the medulla.

Q.2 What is the distribution of the hypoglossal nerve?

Q.3 What will be the effects of cutting this nerve on one side?

There will be ipsilateral lower motor neuron type of paralysis of muscles of the tongue. On asking the patient to protrude his tongue, it will deviate to the paralyzed side.