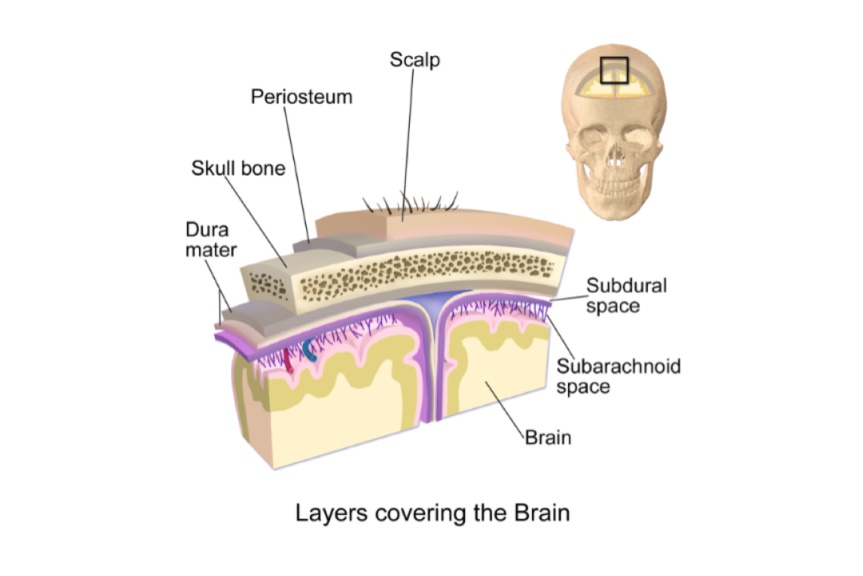 Q.1 What are meninges?

These are the layers of connective tissue covering the brain and spinal cord.

Q.2 What are the layers of the meninges?

Q.3 What is the developmental origin of meninges?

Q.4 What are the layers of the dura mater?

Dura mater is the thickest and toughest membrane covering the brain and consists of two layers:

Q.5 To what structures the endosteal layer is attached.

It is attached to:

Q.6 What are the structures covered by the endosteal layer other than the brain?

It provides tubular sheaths for cranial nerves and fuses with epineurium except the optic nerve, where sheaths are derived from meninges.

Q.7 What are meningocytes and what is their function?

Meningocytes are mesothelial cells found in:

Q.8 Name the coverings of the spinal cord.

Q.9 What are the folds of dura mater?

These are formed by the meningeal layer of the dura mater around the brain. These projects inwards and divide the cranial cavity into different compartments.

It is a fold of dura mater, which is sickle-shaped and occupies the median longitudinal fissure between two cerebral hemispheres.

Q.11 What are the venous sinuses enclosed by the falx cerebri?

Q.12 What is ‘tentorium cerebelli’?

It is a tent-shaped fold of dura mater, forming the roof of the posterior cranial fossa. It separates the cerebellum from the occipital lobes of the cerebrum. It lies at right angles to falx cerebri.

Q.13 What are sinuses enclosed by the tentorium cerebelli?

The attached margin encloses the transverse sinus in the posterior part and superior petrosal sinus in the anterolateral part.

Q.14 Where the straight sinus is situated?

Q.15 How the straight sinus is formed and terminates?

Trigeminal or Meckel’s cave is a recess of dura mater, formed by the inferior layer of tentorium cerebelli, over the trigeminal ganglion, on the anterior surface of the petrous temporal bone.

It is a small sickle-shaped fold in sagittal plane projecting forwards into the posterior cerebellar notch.

Q.18 Which sinus is enclosed by falx cerebelli?

It is a circular horizontal fold of the dura mater forming the roof of the hypophyseal fossa, in the middle cranial fossa.

Q.20 What is the structure transmitted by the central aperture of diaphragm sellae?

Q.21 What are the characteristics of venous sinuses of the skull?

Q.22 What are different venous sinuses of the skull?

The venous sinuses of the skull can be divided into two broad groups:

Q.23 Where is the cavernous sinus is situated?

It is situated in the middle cranial fossa on either side of the body of the sphenoid bone.

Q.24 What are the relations of cavernous sinus?

The relations can be divided into 3 broad subdivisions :

Posteriorly:
- Apex of petrous temporal
- Crus cerebri of the midbrain.

Q.26 What are the tributaries of cavernous sinus?

Q.27 What is the commonest cause of thrombosis of cavernous sinus?

Infection of the danger area of the face, nasal cavities, and paranasal air sinuses.

Q.28 What do you understand by the term ‘confluence of sinuses’?

Q.29 What is the characteristic feature of pia mater?

It is a highly vascular layer and is closely adherent to the brain extending into the sulci, but the arachnoid mater does not do so and jumps across the sulci. So the subarachnoid space extends into the sulci.

Q.30 What are arachnoid villi?

These are the finger-like processes of the arachnoid tissue which project into cranial venous sinuses. Their function is to absorb CSF into the bloodstream.

Q.31 What are Pacchionian bodies?

Also called arachnoid granulations. These are aggregations of arachnoid villi clumped together. Found in adults. They are most numerous in relation to superior sagittal sinus.

Q.32 What is ‘Tela choroidea’ and ‘choroid plexuses’? What are their importance?

The folds of highly vascular pia mater projecting into ventricles are tela choroidea.
Cavity of the ventricle is lined by ependyma. The masses of pia mater covered by ependyma are referred to as choroid plexuses.

Importance: At these sites, the CSF is secreted into the ventricles of the brain.

Q.33 What are ‘Cisterns’? What are their functions?

These are communicating pools formed by the subarachnoid space at the base of the brain and around the brainstem.

Function: These reinforce the protective effect on the vital centers in the medulla.

Q.34 What are the communications of subarachnoid space?

It communicates with the ventricular system of the brain by:

It is formed by choroid plexuses of the ventricles of the brain by an active secretory process.

Q.37 What is the pathway of the circulation of CSF?

Q.38 How a sample of CSF obtained?

Q.39 What are the functions of CSF?

It is protective and nutritive to the CNS.

Q.40 What is hydrocephalus?

Q.41 What is Queckenstedt’s test?

Done to detect whether there is a blockade to the circulation of CSF in subarachnoid space of spinal cord.

Anatomical basis of test:
Any increase in intracranial pressure raises the pressure of CSF. This increase is transmitted to CSF in spinal subarachnoid space.

Q.42 What is the commonest cause of extradural hemorrhage?

Rupture of the anterior division of the middle meningeal artery.

Q.43 What is the commonest cause of subdural hemorrhage?

Rupture of superior cerebral vein at its entry into superior sagittal sinus.