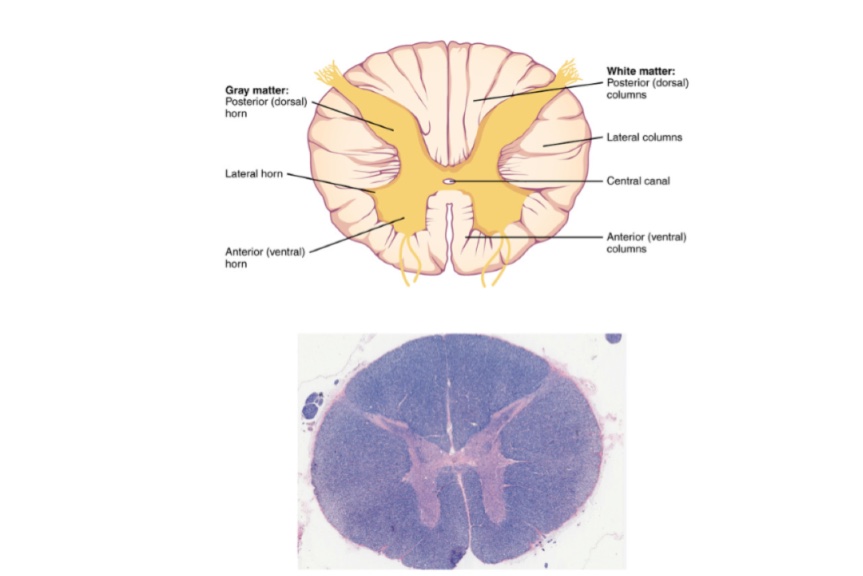 Q.1 What are the divisions of the nervous system?

Anatomically the nervous system is made up of:

Q.2 What are the constituents of the somatic nervous system?

It consists of 12 pairs of cranial nerves and 31 pairs of spinal nerves.

Q.3 What are the functions of the somatic nervous system?

It is concerned with the response of the body to the external environment.

Q.4 Name the constituents of the ‘autonomic nervous system’?

Q.5 What are the functions of the autonomic nervous system?

It is mainly concerned with the control of the internal environment of the body, e.g. regulation of heart, bronchial tree, gut, and glands of the alimentary tract.

Q.6 What is the main difference between the somatic and autonomic nervous systems?

Q.7 What is the extent of the spinal cord?

Q.8 How the spinal cord develops?

It develops from the caudal tubular part of the neural tube, which gradually increases in length.

Q.9 What are the age changes in the length of the spinal cord?

Up to 3rd month of fetal life: Spinal cord occupies the full extent of the vertebral canal.

At birth: At the level of L3 vertebra.

At adolescence: At the level of the intervertebral disc between L1 and L2 vertebra.

• Posterior spinal artery:
Two, along the posterolateral sulcus, i.e. along the line of attachment of dorsal nerve roots.

Q.11 Which artery supplies the greater part of the cross-section of the spinal cord?

Q.12 What is the venous drainage of the spinal cord?

The veins draining the spinal cord are arranged in six longitudinal channels.

Q.13 What are ‘arteries of Adamkiewicz’?

These are the anastomotic arteries between anterior and posterior spinal arteries at the level of T1 and T11.

Q.14 Name the ‘descending’ and ‘ascending’ tracts of the spinal cord?

Q.15 What is the function of interneurons?

Q.16 Trace the pathway of the posterior column ascending tract.

First-order neuron:
Central processes of neurons in dorsal nerve root ganglia. The fibers ascend in the spinal cord as posterior column tracts, up to the lower part of the medulla and end in nucleus gracilis and nucleus cuneatus.

Second-order neuron:
Neurons in nucleus gracilis and nucleus cuneatus. The axons cross the midline (sensory decussation) and run upwards as medial lemniscus to end in the thalamus, passing through the medulla, pons, and midbrain.

Third-order neuron:
Neurons in thalamus. Gives axons to the somatosensory area of the cerebral cortex passing through the internal capsule and corona radiata.

Q.17 What are the tracts of the posterior column?

Q.18 What are the sensations carried by the posterior column?

Q.19 What are the sensations carried by spinothalamic tracts?

Q.20 What are the functions of spinocerebellar tracts?

Ventral tract: Concerned with movements of limb as a whole.

Q.21 What is the function of various descending spinal tracts?

These influence the activity of ventral column neurons both alpha and gamma, through internuncial neurons, affecting both contraction and tone of skeletal muscle. They also influence the transmission of afferent impulses through ascending tracts.

Q.22 What are `ligamentum denticulata'? What is their function?

These are toothed processes extending from pia to dura, pushing the arachnoid before them. They leave the pia midway between anterior and posterior nerve roots and serve to suspend the spinal cord in the midline.

It is the lower end of the spinal cord which is conical. The apex of the conus continues downwards as filum terminale, up to the first coccygeal space.

Q.25 What is cauda equina syndrome?

Q.26 What are the effects of the complete transection of the spinal cord?

In the region below section, there is a complete loss of sensation with flaccid muscle paralysis.

Q.27 What is Tabes dorsalis?

It is a degenerative disease of posterior columns and posterior nerve roots, which is characterized by loss of proprioception (position sense).

Q.28 What is Brown-Séquard’s syndrome?

It occurs in the hemisection of the spinal cord.

It is characterized by:

Q.29 At what site lumbar puncture is done?

Lumbar puncture is done to withdraw CSF from subarachnoid space at the level between L3 and L4 vertebra.