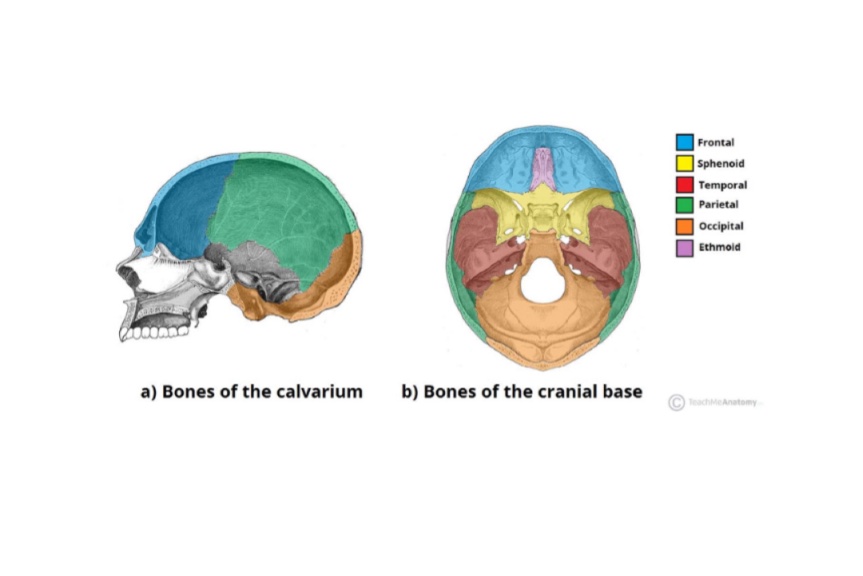 Q.1 What is the total number of bones in the skull?

Q.2 How the skull is held in a normal anatomical position?

By considering any one of the following two planes:

Q.3 What are sutures?

The joints between the various skull bones. These are immovable and fibrous in type.

Q.4 What are the different sutures seen in the superior view (Norma verticalis) of the skull.

It is the highest point on the sagittal suture.

Meeting point between coronal and sagittal sutures. In foetal skull, represents anterior fontanelle, which closes at the age of 1½ years.

Meeting point between sagittal and lambdoid sutures. In foetal skull, represent the posterior fontanelle, which closes by the age of 2-3 months.

Trapezius, in the upper part.

Ligamentum nuchae, in the lower part.

Q.9 What is ‘Occipital point’?

Median point just above inion (most prominent part of external occipital protuberance) which is farthest from the glabella.

The meeting point of two superciliary arch in midline.

Median point at the root of the nose, where the internasal suture meets with the frontonasal suture.

Frontal process of maxilla, mainly.
Nasal part of the frontal bone, in the upper part.

Anterior end of the upper border of the zygomatic arch.

Q.15 What are the boundaries of the supramental triangle?

Behind: Vertical tangent to posterior margin of meatus.

Q.16 What is the significance of tegmen tympani?

It is a thin plate of bone formed by petrous temporal bone. It separates the middle cranial fossa from the cavities of the middle ear, auditory tube, and mastoid antrum.

Q.17 Name the structures attached to the mastoid process.

Q.18 What are the relations of the styloid process?

Base: Ensheathed by tympanic plate. Related to facial nerve.

Q.19 Name the structures attached to the styloid process.

Q.23 What are the boundaries of temporal fossa?

Floor: By parts of the frontal, parietal, squamous temporal, and greater wing of sphenoid bone.

Anterior wall: Mainly by the temporal surface of zygomatic bone. Also by greater wing of sphenoid and frontal bone.

Q.24 What is the origin, insertion, and nerve supply of temporalis muscle?

Q.25 What are the boundaries of infratemporal fossa?

Q.26 What are the communications of infratemporal fossa?

Q.27 What are the contents of ‘infratemporal fossa’?

Q.29 Name the structures attached to the lateral pterygoid plate.

Q.30 Why the upper surface of the body of sphenoid is called ‘Sella turcica’?

Because it is hollowed out in the form of a ‘Turkish saddle’.

Q.32 What are the boundaries of ‘superior orbital fissure’?

Above and medially: Lesser wing of sphenoid.

Below and laterally: Greater wing of sphenoid.

Q.33 What are the boundaries of inferior orbital fissure?

Above and laterally: Greater wing of sphenoid.

Below and medially: Orbital surface of the maxilla.

Q.34 What are the relations of the ‘spine of sphenoid’?

Q.36 What are the boundaries of the optic canal?

Q.37 What structures are transmitted through the optic canal?

It is divided into three parts by a common tendinous ring of Zinn.

– Frontal nerve, of the trigeminal nerve

– Recurrent branch of the ophthalmic artery and

– Nasociliary nerve, branch of the ophthalmic division of V nerve and

Q.39.1 What structures pass through the Foramen ovale?

Q.41.0 What are the boundaries of Foramen magnum?

On each side: Condylar part of occipital bone

Q.44 What are the contents of the Hypoglossal canal?

Q.46 Name the structures transmitted by the carotid canal.

Q.48 Deep petrosal and greater petrosal nerve passes through which foramen of the skull?

Q.50 What are Wormian bones?

These are small irregular bones found in the region of fontanelles and are formed by the additional ossification centers.

Q.51 Which skull bone is formed by intramembranous ossification?

Q.52 Which skull bone is formed partly in cartilage and partly in membrane?

Q.53 Which skull bone is formed entirely in cartilage?

Q.54 What is the Cephalic index?

Q.55 What is the clinical importance of the Cephalic index?

Boat-shaped skull resulting from early union of the sagittal suture.

Pointed skull as a result of the early union of the coronal suture.