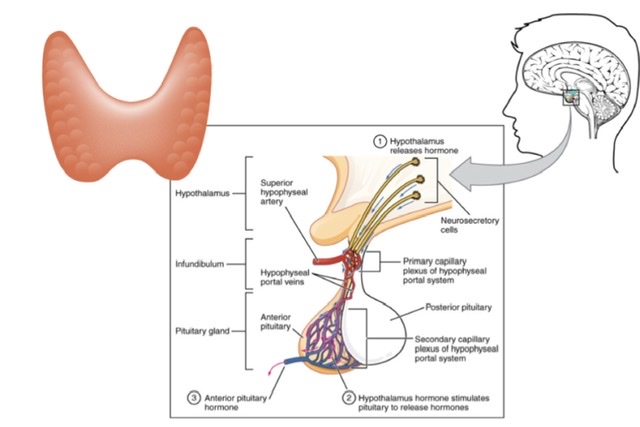 Q.1 What is the situation of thyroid?

In front and sides of the lower part of the neck.

Q.2 What is the extent of thyroid?

Q.3 Name the capsules of thyroid?

Q.4 Why the thyroid is removed along with the true capsule?

To avoid hemorrhage because the capillary plexus is present deep to the true capsule.

Q.5 What is ‘Isthmus’? What are its relations?

It is part of the thyroid gland connecting two thyroid lobes in the lower part.

Q.6 What is the arterial supply to thyroid?

Q.7 What is the venous drainage of thyroid?

Any enlargement of the thyroid gland.

Q.9 In partial thyroidectomy, why the posterior part of lobes are left behind?

Q.10 Why thyroid moves with deglutition?

Because thyroid is attached to the larynx (cricoid cartilage) by the suspensory ligament of Berry.

Q.11 What are the precautions to the taken during thyroidectomy?

Q.12 How the thyroid is developed?

Immediately behind tuberculum impar (a midline swelling in mandibular arches) in the floor of pharynx a diverticulum called thyroglossal duct develops, which grows down into the neck and its tip bifurcates and proliferates to form thyroid gland. The developing thyroid also fuses with caudal pharyngeal complex.

Because the sternothyroid muscles, which cover the thyroid gland in front, are attached above to the thyroid cartilage, limit the upward expansion of thyroid.

Q.15 Why the enlargements of thyroid produce compression symptoms earlier?

The thyroid is enclosed in pretracheal fascia which is much denser in front than behind. The enlarging gland, therefore, tends to push backward, burying itself around the sides of the trachea and esophagus and compress or displace them, with resulting difficulty in breathing and swallowing.

Q.1 What is the number of parathyroid glands?

Q.2 What is the position of parathyroid glands?

Superior parathyroids:
Usually lies in the middle of the posterior border of lobe of thyroid above the level at which the inferior thyroid artery crosses recurrent laryngeal nerve.

Inferior parathyroids:
Usually below the inferior thyroid artery near the lower end of the posterior border of the thyroid gland.

Q.3 What type of cells are present in parathyroid glands?

Q.4 How parathyroids are developed?

Superior parathyroids:
From the endoderm of the fourth pharyngeal pouch.

Q.1 What is the position of the pituitary gland?

It lies in the floor of middle cranial fossa in a depression on the superior surface of body sphenoid called sella turcica. It is suspended from the floor of the third ventricle of the brain by a narrow stalk called the infundibulum.

Q.2 What are the relations of the pituitary gland?

Q.3 What are the parts of the pituitary gland?

Q.4 What are the cell types in the pars anterior and what are their secretions?

Q.5 Which hormone is produced by pars intermedia?

Q.6 Which hormone is produced by pars posterior?

Q.7 Where the hormones of pars posterior are synthesized?

Q.8 What is the function of gonadotrophic hormones?

Q.9 What is the hypothalamohypophyseal portal system? What is its significance?

In these two sets of capillaries are present between arteries and veins. One of these is in the median eminence and upper infundibulum and the second set is in sinusoids of pars anterior.

Clinical significance:
Neurons in the hypothalamus produce releasing factors for hormones of the adenohypophysis in capillaries of median eminence and infundibulum. These are carried by the portal system to pars anterior which in turn stimulates to release appropriate hormones.

These are cells in pars posterior.

Q.11 What is the developmental origin of hypophysis?

Adenohypophysis:
Develops from Rathke’s pouch, which arises from the ectoderm lining roof of the primitive mouth (stomodeum).

Neurohypophysis:
Develops as downgrowth from floor of third ventricle.