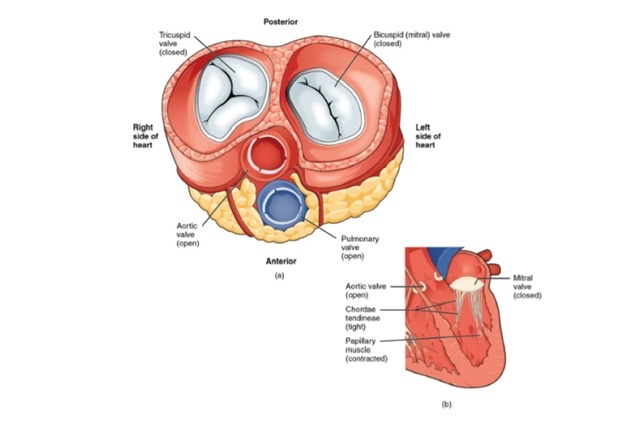 Q.1 What is pericardium?

It is a fibroserous sac enclosing the heart and roots of great vessels.

Q.2 What are the parts of pericardium?

Q.3 What are the attachments of fibrous pericardium?

Fibrous pericardium is conical in shape.

Apex: Blunt and fused with roots of great vessels and pretracheal fascia.

Base: Blends with the central tendon of the diaphragm.

Anteriorly: By superior and inferior sternopericardial ligaments, attached to the body of the sternum.

Q.4 What are the different layers of serous pericardium?

Q.5 What is the pericardial cavity?

It is a potential space between the parietal and visceral layers. It contains a thin layer of serous fluid.

Q.6 What is oblique sinus of pericardium?

It is a space behind the heart between the left atrium, anteriorly and parietal pericardium, inferiorly.

Q.7 What are the boundaries of the oblique sinus of the pericardium?

The boundaries of the oblique sinus of the pericardium are as follows:

Floor: It is open inferiorly.

Q.8 What is transverse sinus of pericardium?

It is a horizontal gap between ascending aorta and pulmonary trunk anteriorly and superior vena cava and atrium posteriorly. On each side, it opens into pericardial cavity.

Q.9 What are the boundaries of the transverse sinus of the pericardium?

The boundaries of the transverse sinus are as follows:

Roof: Reflections of serous pericardium from the posterior surface of the great arterial trunk to the left atria.

Q.10 How will you introduce your fingers into the transverse sinus of the heart?

To introduce the finger into the transverse sinus, the superior vena cava is used as a guide. The sinus is located anterior to it and so pass your finger in front of the S.V.C.

Q.11 What is the surgical importance of transverse sinus?

Through this sinus, a temporary ligature is given to occlude pulmonary trunk and aorta during cardiac operations.

Q.12 What is the developmental origin of sinuses of pericardium?

Transverse sinus:
Develops due to degeneration of dorsal mesocardium.

Oblique sinus:
Develops due to the absorption of pulmonary veins into the left atrium.

Q.13 What is the nerve supply of pericardium?

Q.14 What is the arterial supply of pericardium?

Q.15 What are the contents of the pericardium?

Q.1 What is the position of heart?

It is placed obliquely behind the body of the sternum and adjoining parts of costal cartilages of ribs. 1/3 of it lies to right and 2/3 of it lies to the left of the median plane.

Q.2 What are the divisions of the heart?

Heart is composed of four chambers:

Q.3 Name the structures in anterior and posterior interventricular grooves.

Q.4 Which chambers form the upper border of heart?

Q.5 Which chambers form the left border of heart?

Mainly by left ventricle and Partly by left auricle.

Q.6 Name the chambers forming the surfaces of the heart?

Posterior surface (Base):
Mainly by left atrium, Small part by posterior part of the right atrium.

Q.7 What is the right auricular appendage and what are its characteristic features?

It is the upper prolonged end of the right atrium, which covers the root of ascending aorta. Externally, it is notched and the interior is sponge-like.

Q.8 What is the clinical importance of the structure of the right auricular appendage?

Its sponge-like interior prevents the free flow of blood and favor thrombosis which may dislodge to cause pulmonary embolism.

Q.9 What are the parts of the right atrium and how they are developed?

Q.10 Name the veins opening in the right atrium?

Q.11 What is the Eustachian valve?

It is a rudimentary valve guarding the opening of inferior vena cava. During embryonic life, it guides the inferior caval blood to the left atrium through foramen ovale.

Q.12 What are the features of the septal wall of the right atrium?

Q.13 What are the parts of the right ventricle?

Q.14 What are the different types of trabeculae carneae?

Q.15 How the left atrium is developed?

Q.16 What are the parts of the left ventricle?

Inflow part same as the right ventricle. The inflow and outflow parts are at an acute angle.

It is an impression in the septal wall of the left atrium, corresponding to fossa ovalis of the right atrium.

Q.18 What are the parts of the interventricular septum?

Its right side is convex and bulges into right ventricle.

Greater part of the septum is thick and muscular and a small area near the posterior margin is membranous.

Q.19 What is the developmental origin of ventricles?

The ventricles develop from:

Q.21 What type of valves are present in the heart?

One pair Right atrioventricular valve: Tricuspid valve, made up of three cusps.

Left atrioventricular valve: Bicuspid or mitral valve, made up of two cusps.

Narrowing of valve orifice due to the fusion of valve cusps.

Q.23 What is the ‘incompetence’ of the valve?

The imperfect closure of the valve due to dilatation of valve orifice or stiffening of valve cusps.

Q.24 What are the septal defects?

These are the defects resulting from the involvement of interatrial or interventricular septum.

Q.25 What is dextrocardia?

This is a congenital anomaly in which the heart position is reversed and it lies on the right side of the thorax. This may be associated with the reversal of all the intraabdominal organs (situs inversus).

Q.26 What will be the effect of pulmonary stenosis?

There will be right ventricular hypertrophy because the heart tries to force blood through the narrowed valve. This will be associated with congestion in the right atrium followed by secondary right atrial hypertrophy.

Q.27 What is Fallot’s tetralogy?

(4) an overriding of the aorta over the septal defect.

So, the aorta receives blood from both ventricles.

Q.28 What is the complete transposition of great arteries?

It is a condition in which aorta arises from the right ventricle and pulmonary trunk from the left ventricle.

Q.1 What is the origin of the right and left coronary arteries?

Q.2 What are the branches of the right coronary artery?

Q.3 What are the branches of the left coronary artery?

Q.4 What is the distribution of the right coronary artery?

Q.5 What is the distribution of the left coronary artery?

Q.6 Do the coronary arteries anastomose?

Q.7 What is the clinical importance of the anastomosis between the coronary arteries?

The anastomosis between the branches of the coronary arteries is inadequate to compensate for the sudden occlusion. A blockage therefore leads to death (infarction) of the affected cardiac tissue.

Q.8 What is ‘Angina pectoris’?

It is a clinical condition characterized by pain in front of the chest radiating to the ulnar side of the left arm and forearm. This is due to an incomplete obstruction of the coronary arteries.

Q.9 What are the tributaries of the coronary sinus?

Q.10 What are Thebsian veins?

These are small veins present in all chambers of heart-opening directly into cavity of chambers.

Q.11 How is the coronary sinus developed?

Q.12 Where does the coronary sinus open?

Into posterior wall of right atrium.

CONDUCTING SYSTEM OF THE HEART

Q.1 What are the functions of conducting system of heart?

Q.2 What is the sinuatrial (SA) node and where is it located?

The SA node is the pacemaker of the heart. It is situated in the right atrium along the anterior margin of the opening of the superior vena cava.

Q.3 What is the position of the AV node?

The AV node lies in the wall of the right atrium formed by interatrial septum near the opening of the coronary sinus. It receives an impulse from the SA node.

Q.4 What is Atrioventricular bundle? What are its divisions?

AV bundle forms the connection between atrial and ventricular musculature. It begins at the AV node and reaches the posterior margin of the membranous part of the ventricular septum. Here it divides into left and right branches, which descend on the left and right side of interventricular septum beneath the endocardium. Each branch divides and subdivides to form Purkinje fibers, which terminate in ventricles.

The ‘moderator’ band also called the septomarginal trabecula (one of the trabeculae carneae) extends from the ventricular septum to the anterior papillary muscle. This is important as it carries the right branch of the atrioventricular bundle (bundle of His). It may assist in preventing the overdistension of ventricle.

Q.6 What is the nerve supply of the heart?

Nerve supply to the heart is by:

Both types of nerves form superficial and deep cardiac plexus and supply the heart.

Q.7 How is the superficial cardiac plexus formed? What are its branches?

The superficial cardiac plexus formed by:

Q.8 How is the deep cardiac plexus formed and what is its distribution?

The deep cardiac plexus is formed by: