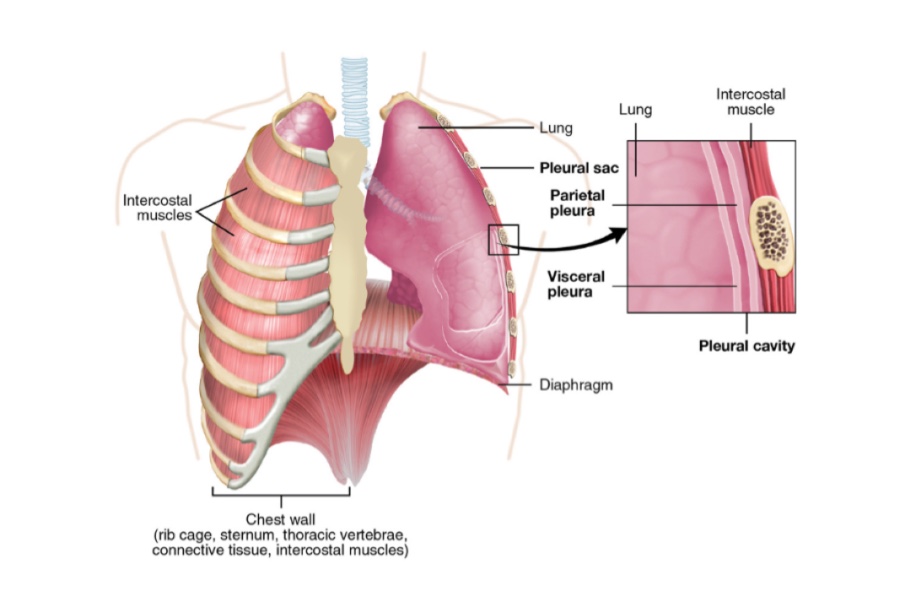 It is a serous membrane, lined by mesothelium. There are two pleural sacs, one on either side of the mediastinum.

Q.2 What are the parts of the pleura?

The two layers are continuous with each other at the hilum of the lung.
The two layers enclose between them a potential space known as the pleural cavity

Q.3 What are the parts of the parietal pleura?

Q.4 What is the extent of cervical pleura in the neck?

It extends two inches above the first costal cartilage and one inch above medial ½ of clavicle.

Q.5 What are the relations of cervical pleura?

Posteriorly: Neck of first rib with its relations.

Q.6 What is ‘Pulmonary ligament’? What are its functions?

It is parietal pleura surrounding the root of the lung which hangs down as a fold called pulmonary ligament.

Q.7 What are the ‘recesses of pleura’?

These are folds of parietal pleura, which act as reserve spaces, into which lungs can expand during deep inspiration.

Q.8 What are the parts of the lung not covered with visceral pleura?

At hilum and along the attachment of pulmonary ligament where it is continuous with parietal pleura.

Q.9.1 What is the nerve supply of pleura?

Q.9 What is the arterial supply of pleura?

Q.10 What is the lymphatic drainage of pleura?

Q.11 What is the developmental origin of pleura?

Q.12 What is the surface marking of the pleura?

Cervical pleura:
Curved line forming a dome over the medial 1/3 of the clavicle. The apex of the curve lies 2.5 cm. above the clavicle.

Q.13 What are the places at which pleura descends below the costal margin?

Q.14 What is Pneumothorax?

A pneumothorax is produced by the presence of air in the pleural cavity.

Q.15 What is hemothorax?

It is the blood in the pleural cavity.

Q.16 What is pleural effusion?

It is the accumulation of free fluid in the pleural cavity.

It is the accumulation of pus in the pleural cavity.

Q.18 What is ‘Paracentesis thoracis’ and from which site it is done?

It is the process of aspiration of any fluid from the pleural cavity.

Q.19 What are the structures pierced during paracentesis?

The structures pierced from outward to inwards in the midaxillary line are:

Q.20 What precaution should be taken during aspiration from the pleural cavity?

Q.1 What is a bronchopulmonary segment?

The main bronchus on each side gives off branches to each lobe of the lung, lobar bronchus.

Each lobar bronchus then divides into segmental bronchi, each of which supplies a segment of the lung called a bronchopulmonary segment. Each segmental bronchus is accompanied by a branch of the pulmonary artery and a tributary of the pulmonary vein. The arteries lie posterolateral to the corresponding bronchi. Pulmonary veins tend to run between adjacent bronchopulmonary segments, therefore each vein may drain more than one segment.

Each bronchopulmonary segment is therefore a self-contained, functionally independent respiratory unit of lung tissue. These segments are wedge-shaped with their apices at the hilum and bases at the lung surface. Each is surrounded by connective tissue continuous with that of the visceral pleura. There are also veins which run between the segments and are called intersegmental veins.

Q.2 Name the bronchopulmonary segments of the two sides.

Each bronchopulmonary segment receives its name from that of its supplying segmental bronchus.

The left upper lobe has a lingular segment which is equivalent to the right middle lobe.
On the right side there is a medial basal segmental bronchus which is absent on the left.

Q.3 Why the knowledge of the bronchial tree and bronchopulmonary segments is important?

Q.4 How do the bronchopulmonary segments drain?

Each segment is drained by a vein and an artery. The vein is located in the periphery, whereas the artery and its branches are located in the center of the segment.

Q.5 What are the differentiating features of the two lungs?

Q.6 Name the structures in the root of the lungs.

Q.7 At what level the root of lungs lie?

Opposite body of T5-7 vertebra.

Q.8 What is the blood supply of the lungs?

Q.9 What are the relations of the structures at the root of the lung?

From above downwards (differs on two sides)

Q.10 What is the surface marking of the oblique fissure of the lung?

It corresponds approximately with the medial border of the scapula when the arm is raised above the shoulder. The fissure may be represented by a line drawn obliquely from a point 2 cm, lateral to the 4th thoracic spine on the right side and at a slightly higher level on the left side to another point on the 5th rib in the midaxillary line and a third point on the 6th costal cartilage about 7.5 cm from the midline.

Q.11 Where can the breath sound of the apical segment of the lower lobe be heard on auscultation?

Posteriorly below the upper end of the oblique fissure.

Q.12 Give the surface marking of the horizontal fissure of the right lung.

It corresponds approximately with a line drawn horizontally at the level of the 4th costal cartilage anteriorly. This line meets that of the oblique fissure in the midaxillary line.

The upper lobe of the left lung corresponds with the upper and middle lobes of the right lung. The part of it which corresponds to the middle lobe is called the ‘lingula’ because it projects anteriorly to form the lingula (tongue-shaped structure) below the cardiac notch.

Q.15 What is ‘sequestration of lung'?

An area of lung not having any communication with the bronchial passages. Most frequently seen in the lower lobe of the left lung.

Q.16 What is the lymphatic drainage of the lung?

The lymphatics of the lung drain centripetally from the pleura towards the hilum into the bronchopulmonary lymph nodes. Efferents of these nodes drain into the tracheobronchial nodes which drain into the paratracheal nodes and the mediastinal lymph trunks. These lymph trunks drain directly into the brachiocephalic vein, or occasionally, indirectly via the right lymphatic duct or the thoracic duct.

Q.17 What are the structures related to the medial side of the right lung?

The structures related to the medial side of the right lung include: