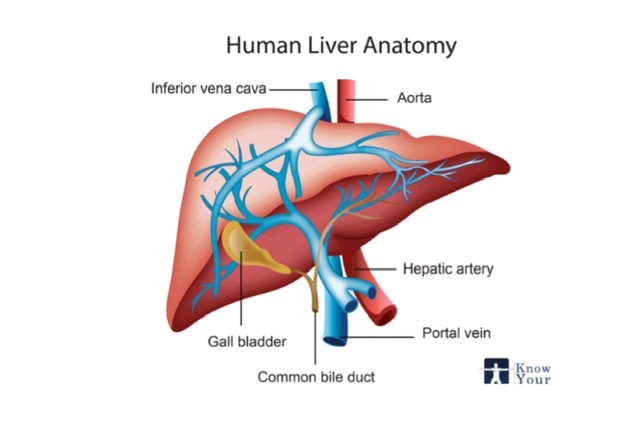 Q.1 What are the anatomical lobes of the liver?

Q.2 What is porta hepatis?

It is a deep transverse fissure, 5 cm long, on the inferior surface of the right lobe of the liver, between quadrate lobe below and front and caudate lobe above. Through its vessels, nerves and ducts pass to and from the liver. Lips of porta hepatis provide attachment to the lesser omentum.

Q.3 What are the structures lying in the porta hepatis and relations of these within it?

Q.4 What are the boundaries of the caudate lobe?

Caudate lobe is bounded on the right by the groove for inferior vena cava, on left by the fissure for ligamentum venosum and inferiorly by porta hepatis. Above it is continuous with the superior surface.

Q.5 What are the bare areas of the liver?

These are the parts of the liver not covered by the peritoneum.

Q.6 Which organ is related to the main bare area of the liver?

Q.7 How is ligamentum teres formed?

Ligamentum teres is formed from the left umbilical vein. It begins at the umbilicus and ends by joining the left branch of the portal vein.

Q.8 What are the peritoneal ligaments of the liver?

Following are the peritoneal ligaments of the liver:

Q.9 What are the boundaries of the quadrate lobe of the liver?

It is the part of the visceral surface between fissure for ligamentum teres and fossa for gallbladder. It is bounded posteriorly and above by porta hepatis and anteriorly and below by the inferior margin of the liver.

Q.10 What are the relations of quadrate lobe of the liver?

Quadrate lobe is related to the lesser omentum, pylorus, and first part of the duodenum.

Q.11 What is ligamentum venosum?

It is the remnant of ductus venosus of fetal life. It is connected above to left hepatic vein near its entry into inferior vena cava and below to the left branch of the portal vein, thus forming a bypass for blood during fetal life.

Q.12 What is the blood supply of the liver?

The liver receives 20% of its blood from the hepatic artery and 80% from the portal vein. Before entry, these divide into right and left branches. Within the liver, they divide to form segmental vessels and redivide into interlobular vessels, which run in portal canals. Further divisions open into the hepatic sinusoids.

The interlobular branches of the hepatic artery and portal vein and an interlobular bile ductule together for a portal triad and lie within the portal canal.

Q.14 What are the functional lobes of the liver?

The liver is divided into two functional (physiological), right and left lobe, on the basis of intrahepatic distribution of hepatic artery, portal vein, and biliary ducts. These lobes do not correspond to the anatomical lobes of the liver.

The physiological lobes are separated by a plane passing on the anterosuperior surface along a line joining the cystic notch to the groove for inferior vena cava, on the inferior surface, the plane passes through gallbladder fossa and on the posterior surface through the middle of the caudate lobe. Each lobe is further divided and subdivided into segments.

Q.15 What is the clinical importance of functional segments of the liver?

The portal canals do not cross from one segment to the other, so the hepatic segments are of surgical importance.

Sometimes, the lower border of the right lobe of the liver, a little to the right of gallbladder projects down as a tongue-like a process, this is known as Riedel’s lobe.

Q.17 Why the gallbladder is rarely involved in the malignancy of liver?

Because of the absence of lymphatic pathways from liver to gallbladder.

Q.18 What is the developmental origin of the liver?

From the ventral surface of foregut as an outgrowth known as hepatic diverticulum close to point where it is continuous with yolk stalk. The diverticulum proliferates to form the liver.

The connective tissue of the liver is formed by the mesoderm of septum transversum.