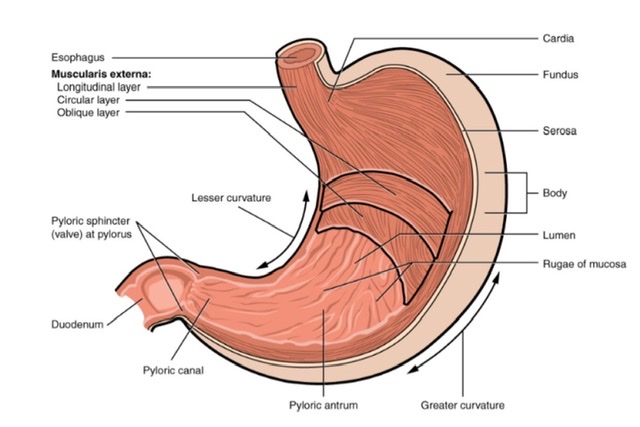 Q.1 What is the position of the stomach?

It lies obliquely in the upper and left part of the abdomen, occupying epigastric, umbilical, left hypochondrium, and left lumbar region.

Q.2 What are the normal variations in the capacity and shape of the stomach?

Q.3 What are the different parts of the stomach?

Q.4 How the pyloric orifice is recognized by a surgeon?

Q.5 What is the level of orifices of the stomach?

These structures are related to the posterior surface of the stomach.

Q.8 What is the blood supply of the stomach?

Venous drainage:
Into superior mesenteric and splenic veins, which pass into the portal vein.

Q.9 What is the lymphatic drainage of the stomach?

For lymphatic drainage, the stomach is divided into four regions by imaginary lines as follows:

From coeliac nodes, it passes to intestinal lymph trunk to reach cisterna chyli.

Q.10 What is the nerve supply of the stomach?

These are:
– Vasomotor,
– Motor to pyloric sphincter,
– Chief pathway for pain sensation.

– Posterior gastric nerve (mainly right vagal fibers):
Supplies posterior surface of fundus, body, and pyloric antrum and gives a branch to coeliac plexus.
These are motor and secretomotor to stomach.

Anterior and posterior vagi are also known as nerves of Latarjet.

Q.12 What are the functions of the stomach?

Q.13 What is the advantage of highly selective vagotomy?

It does not cause stomach atony. Branches that supply the acid-secreting body of the stomach are only cut, thus preserving innervation and function of pyloric antrum.

Q.14 In which part of the stomach, X-ray shows gas?

Fundus of stomach which appears as a dark shadow below the left dome of the diaphragm.

Q.15 What is gastric canal? What is its clinical importance?

These are the mucosal folds (Rugae) along the lesser curvature which are arranged longitudinally to form a canal. Clinical importance: Gastric canal allow rapid passage of fluid along the lesser curvature to the lower part before it spreads to other parts of the stomach. Thus it is irritated most by the swallowed liquids and hence it is more vulnerable to peptic ulcers.

Q.16 What are the different types of glands in the stomach?

Q.17 What are the cell types present in glands of the stomach?

Q.18 What is ‘leather bottle stomach’?

Thickening of stomach wall due to the proliferation of fibrous tissue especially in the submucosa. The mucous membrane appears normal.

Q.19 What is the commonest site of gastric ulcers?

Gastric ulcers are usually found in the distal part, near the lesser curvature.

Q.20 What is the cause of fatal haemorrhage in perforated gastric ulcer?

Perforation of a gastric ulcer on the posterior wall of the stomach can lead to erosion of splenic artery leading to fatal hemorrhage.