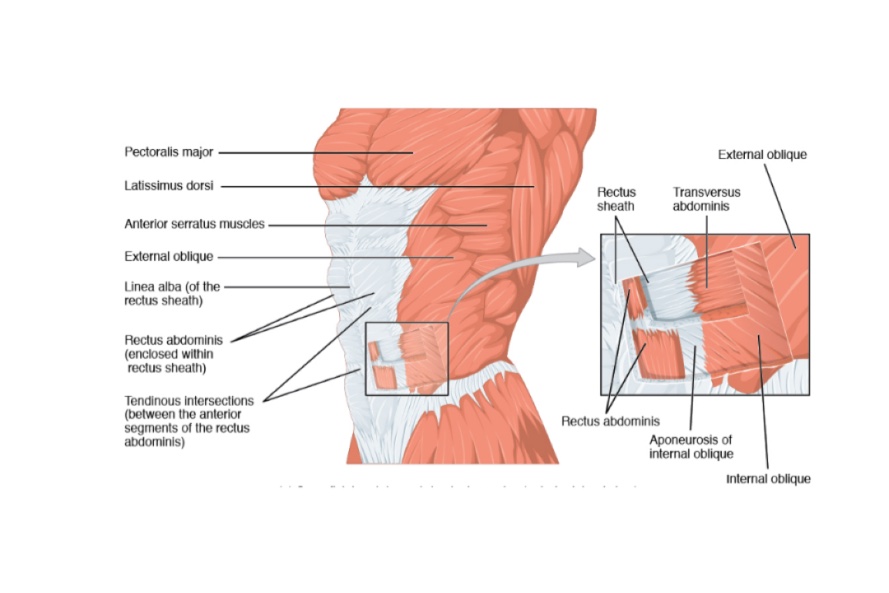 Q.1 What is the position of umbilicus?

Q.2 What are different abdominal regions?

Q.3 What is the developmental origin of umbilicus?

It is scar formed by the remnants of the root of the umbilical cord.

Urinary fistula is formed so that urine may pass through the umbilicus.

It is the persistence of the physiological hernia of the midgut loop outside the abdominal cavity.

Q.6 What is the importance of umbilicus?

Q.7 What are the remnants of the umbilical cord?

Q.8 What are the features of the superficial fascia of the abdominal wall?

Below the umbilicus, superficial fascia is divided into:

Q.9 What are the attachments of fascia of Scarpa?

Q.10 What are the contents of the superficial fascia of abdominal wall?

Q.11 Is there any deep fascia in the anterior abdominal wall?

No. This absence of deep fascia allows expansion of the abdominal wall.

Q.12 What is the cutaneous nerve supply of the anterior abdominal wall?

Q.13 What is the nerve supply of muscles of the anterior abdominal wall?

Q.14 What is the arterial supply of anterior abdominal wall?

Q.15 What is the lymphatic drainage of the anterior abdominal wall?

Q.16 Where the urine will collect in the rupture of urethral bulb in perineum?

It will be collected in scrotum, perineum, and penis and then lower abdomen deep to fibrous fascial plane. It does not extravasate into lower limb, because of attachment of membranous layer to the deep fascia of the upper thigh along Holden’s line.

Q.17 What is the drainage of cutaneous veins of the anterior abdominal wall?

Q.18 What is caput medusae and its clinical importance?

In portal vein obstruction, the superficial abdominal (cutaneous) veins are dilated for collateral circulation around the umbilicus in a radiating pattern. In caput-medusae, the blood flows upwards above the umbilicus and downwards below the umbilicus.

Q.19 What is the clinical importance of the thoracoepigastric vein?

It is a subcutaneous vein connecting the great saphenous vein with an axillary vein. It becomes dilated and tortuous in vena caval obstructions to provide alternate channel for blood flow. It connects tributaries of lateral thoracic vein draining into an axillary vein and superficial epigastric vein draining into the great saphenous vein which in turn drains into the femoral vein. Clinical importance: In superior caval obstruction, blood in thoracoepigastric vein flows downwards and in inferior caval obstruction, blood flows upwards.

Q.20 Name the muscles of the anterior abdominal wall.

Q.21 What are the functions of the muscles of the anterior abdominal wall?

Q.22 What is the origin, insertion, and nerve supply of pyramidalis muscle?

Pyramidalis is a small triangular muscle placed in front of rectus abdominis within its sheath.

Q.23 What is a cremasteric reflex? What is its clinical importance?

On stroking the skin of the upper part of the medial side of thigh there is elevation of the testis, due to reflex contraction of the cremaster muscle. Reflex is more brisk in children.

Clinical importance:
In upper motor neuron lesions above the L1 segment, the reflex is lost.

Q.24 What is the Ligament of Poupart?

Q.25 How inguinal ligament is formed?

Extension of lower border of external oblique aponeurosis, which is thickened and folded backward. It extends from anterior superior iliac spine to pubic tubercle.

Q.26 What are the attachments to inguinal ligament?

Q.28 How is conjoint tendon formed ?

Formed by fusion of lower aponeurotic fibers of the internal oblique and transversus abdominis. It is attached to the pubic crest and medial part of pecten pubis.

Q.29 What is the function of conjoint tendon?

It guards the weak point of the superficial inguinal ring.

Q.30 What are the boundaries of the lumbar triangle of Petit and what is its clinical importance?

It is the site of the primary lumbar hernia

Q.1 What is the Rectus sheath?

It is an aponeurotic sheath covering rectus abdominis and pyramidalis muscle with their associated vessels and nerves.

Q.2 How is the Rectus sheath formed?

Anterior wall:
Aponeurosis of all three muscles of the abdomen.

Arcuate line (fold or Douglas) represents a lower free margin of posterior wall of the rectus sheath, at the level midway between the umbilicus and pubic symphysis.

Q.3 What are the ‘tendinous intersections’ of Rectus abdominis?

Q.4 What is the importance of tendinous intersections of Rectus abdominis?

Q.5 Where is the ‘neurovascular plane’ of abdomen is situated?

It lies between the internal oblique and transversus muscle. Various abdominal nerves and vessels run in this plane.

Q.6 What are the functions of the rectus sheath?

Q.7 What are the contents of the rectus sheath?

– It extends from the xiphoid process to pubic symphysis.

– Wider above and narrow below the umbilicus.

– It separates the two rectus abdominis muscles from each other.

Q.9 What is the divarication of recti?

Q.10 Why supraumbilical median incision is given for surgery?

The incision through linea alba is given, because it is made of fibrous tissue only, so there is minimal blood loss. It also does not cause damage to the nerves.

Q.11 In the paramedian incision of the rectus sheath, the rectus muscle is retracted laterally. Explain why?

Q.12 Why the trans-rectus incisions are not preferred during surgery?

Because the rectus receives its nerve supply laterally and muscle medial to incision is deprived of its innervation and hence undergoes atrophy.

Q.13 What is fascia transversalis?

Part of abdominopelvic fascia lining inner surface of transversus abdominis muscle and is separated from peritoneum by extraperitoneal tissue which is rich in fat.

Q.14 What are the prolongations of fascia transversalis?

Q.15 Why the cutting of one or two nerves supplying rectus produces clinical ill effects but not that of lateral abdominal muscles?

Because lateral abdominal muscles are supplied by a richly communicating network but the segmental nerve supply of rectus has little cross communications.

Q.1 How is the abdomen divided into various regions?

Abdomen is divided into nine regions by:

Q.2 What is ‘linea semilunaris’?

It is a curved line from the pubic tubercle to the tip of 9th costal cartilage, present on the lateral edge of the rectus abdominis muscle.

Q.3 Name the structures lying at the level of L1 vertebra.

Q.4 Name the structures lying at the level of L5 vertebra.

Q.5 Name the structures lying at the level of L2 vertebra.