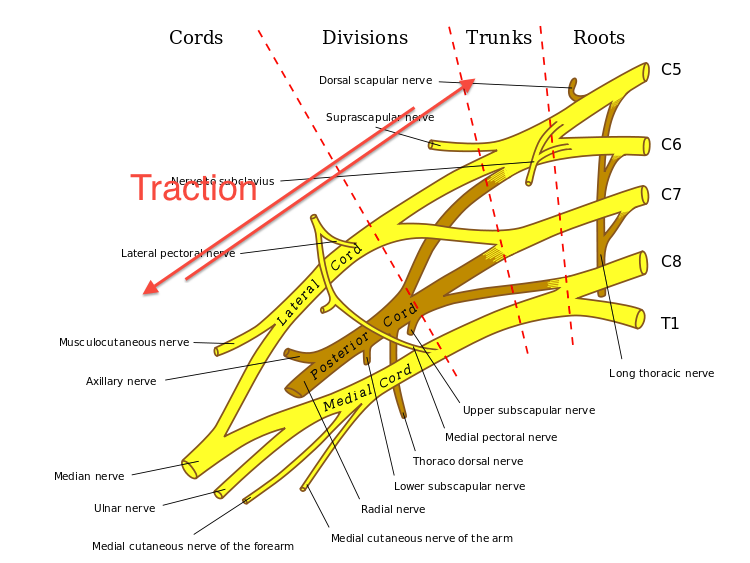 Q.1 What is brachial plexus?

Q.2 What is the prefixed and postfixed type of plexus?

The C5 and C6 join to form the upper trunk, C7 forms the middle trunk, and C8 and T1 join to form the lower trunk. Each trunk divides into ventral and dorsal division, which ultimately supply anterior and posterior aspects of the upper limb.

Q.4 How the cords of brachial plexus are formed?

Q.5 What are the branches of roots of brachial plexus?

Q.6 What are the branches of trunks of brachial plexus?

Q.7 What are the branches of the lateral cord of brachial plexus?

Q.8 What is the main nerve supply of pectoralis major?

Q.9 What are the branches of the medial cord of brachial plexus?

Q.10 What are the branches of the posterior cord of brachial plexus?

Q.11 What is the main nerve supply of pectoralis minor?

Q.12 What is the distribution of the suprascapular nerve?

It is the junction of the ventral primary rami of C5 and C6 forming the upper trunk of the brachial plexus. The trunk being short, the suprascapular nerve and nerve to subclavius which arise directly from it, and the anterior and posterior divisions of the trunk all lie close to the Erb’s point and may be involved in any injury at this point.

It is the paralysis resulting from a lesion of the upper trunk at Erb’s point. It is caused by the forcible downward traction of the shoulder with lateral displacement of the head to the other side. In this lesion, the area of distribution of C5 and C6 is affected and most commonly the muscles supplied by C5 are involved. The deltoid, biceps, brachialis, brachioradialis, and sometimes supraspinatus, infraspinatus, and supinator are paralyzed. The affected limb assumes a characteristic ‘waiter’s tip’ position.

Q.15 What is Klumpke’s paralysis?

This is a paralysis resulting from the lesion of the lower trunk (C8 and T1 nerve roots). It is caused by forceful upward traction of the arm. The area of distribution mainly of T1 is involved, i.e. all the intrinsic muscles of the hand are affected and flexors of the wrist are affected due to C8 root involvement.

Q.16 What is the clinical importance of postfixed type of brachial plexus?

The T2 root has to curve up over the first rib to form the brachial plexus. This results in greater pressure on the T2 nerve root in postfixed brachial plexus as compared to normal. Hence symptoms associated cervical rib can be present in the absence of such a rib.

Q.17 What is the cause of the referred pain to the skin over the shoulder?

This is due to inflammation of the diaphragmatic pleura or peritoneum, (usually occurring in cholecystitis and splenic infarction) which has the same segmental nerve supply (C4) via phrenic nerve as the shoulder skin via the lateral supraclavicular nerve.

It is due to the damage to the brachial plexus in the axilla from the pressure of the crutch. In these, the radial nerve is frequently implicated and ulnar nerve suffers next in frequency.

This is radial nerve palsy due to the prolonged pressure on the nerve in the spiral groove of the humerus. This occurs when a drunkard falls into sleep (on Saturday night!) with his arm hanging over the back of the chair. In the morning, he is suffering from the wrist drop which is temporary.

This is a clinical condition in which the inferior angle and the medial border of the scapula becomes unduly prominent. It occurs in the paralysis of long thoracic nerve (Nerve of Bell) which supplies serratus anterior. It can be demonstrated by asking the patient to push against the wall with outstretched hands. The scapula on the affected side becomes winged due to the unopposed action of the rhomboids and levator scapulae, while the paralyzed serratus anterior is not contracting.

Q.21 Name the clinical conditions in which the axillary nerve is likely to be injured.

Q.22 What will be the effects of complete damage to the axillary nerve?