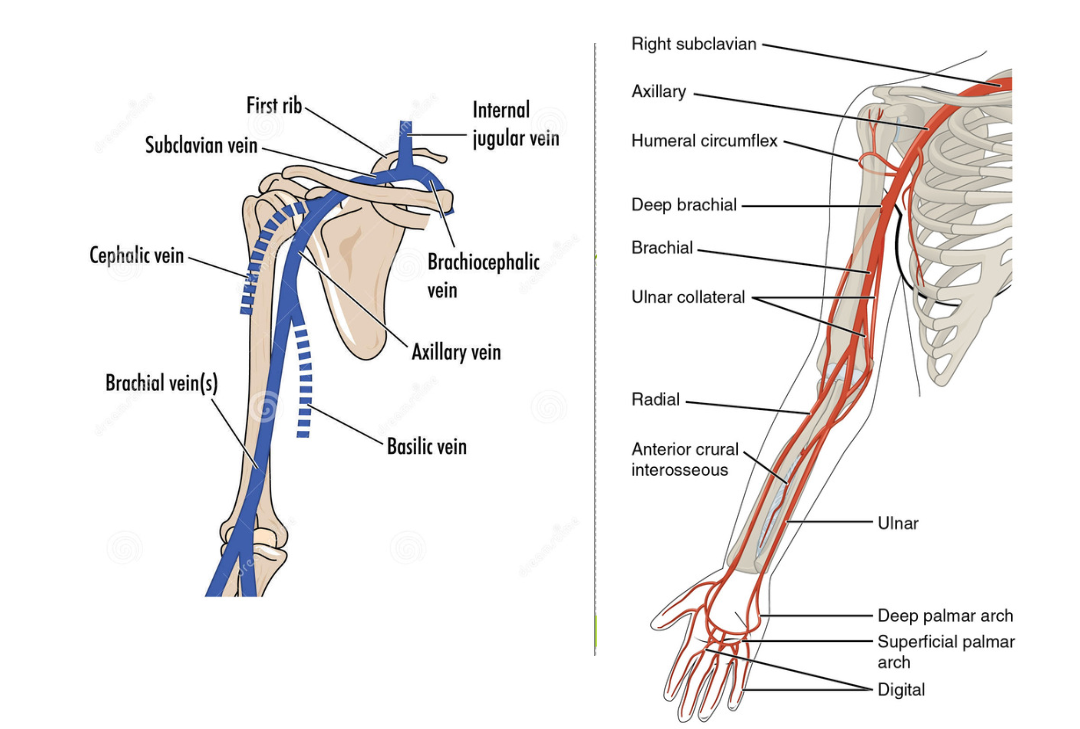 Q.1 What is the extent of the axillary artery?

It extends from the outer border of the first rib to the lower border of teres major muscle. It is a continuation of the subclavian artery and it continues as a brachial artery.

Q.2 What are the parts of the axillary artery?

Pectoralis minor muscle crosses it and divides it into three parts:

Q.3 What are the relations of various nerves with the axillary artery?

Q.4 What is the relation of various muscles with the axillary artery?

Q.6 Name the branches of the axillary artery.

Q.7 What is the extent of the brachial artery?

It extends from the lower border of teres major muscle to elbow at the level of the neck of radius just medial to the tendon of biceps.

Q.8 What are the nerves related to the brachial artery in its course?

Q.9 Name the branches of the brachial artery.

Q.10 What is the clinical importance of the brachial artery?

Brachial pulsations are auscultated in front of elbow just medial to the tendon of biceps while recording the blood pressure.

Q.12 Name the branches of the radial artery.

Q.13 Where the pulsations of the radial artery are felt?

At the wrist against the anterior surface of the lower end of radius.

Q.14 Name the branches of the ulnar artery.

Q.16 Name the structure separating the ulnar artery from the median nerve at the elbow.

Q.17 What are the relations of the radial artery in the forearm.

Q.18 What is the clinical importance of Allen’s test?

This test is performed to test the patency of the radial or ulnar artery.

Q.19 Name the arteries forming an anastomosis around the scapula.

Q.20 How the circulation is carried out when axillary artery is ligated.

By the collateral channels around the scapula, which connect the first part of the subclavian artery with the third part of the axillary artery.

Q.1 What are the main superficial veins of the upper limb?

Cephalic (Preaxial) vein: Begins from the lateral end of the dorsal venous arch and drains into the axillary vein

Basilic (Postaxial) veins: Begins from the medial end of the dorsal venous arch and above the lower border of teres major continues as the axillary vein

Q.12 Name the structures lying between the axillary artery and vein.

The vein lies anteromedial to the artery.

The two are separated by:

Q.3 How the venous drainage of the upper limb is maintained in axillary vein obstruction?

By communication between the upper part of the cephalic vein with the external jugular vein in the neck.

Q.4 What is the clinical importance of the median cubital vein?

It is connected to the deep veins of the upper limb through a perforator which pierces the bicipital aponeurosis, which fixes it. So it does not slip away when intravenous injections are given.

Q.1 Which is the main lymph node of the upper limb?

Q.2 What is the area of lymphatic drainage of axillary lymph nodes?