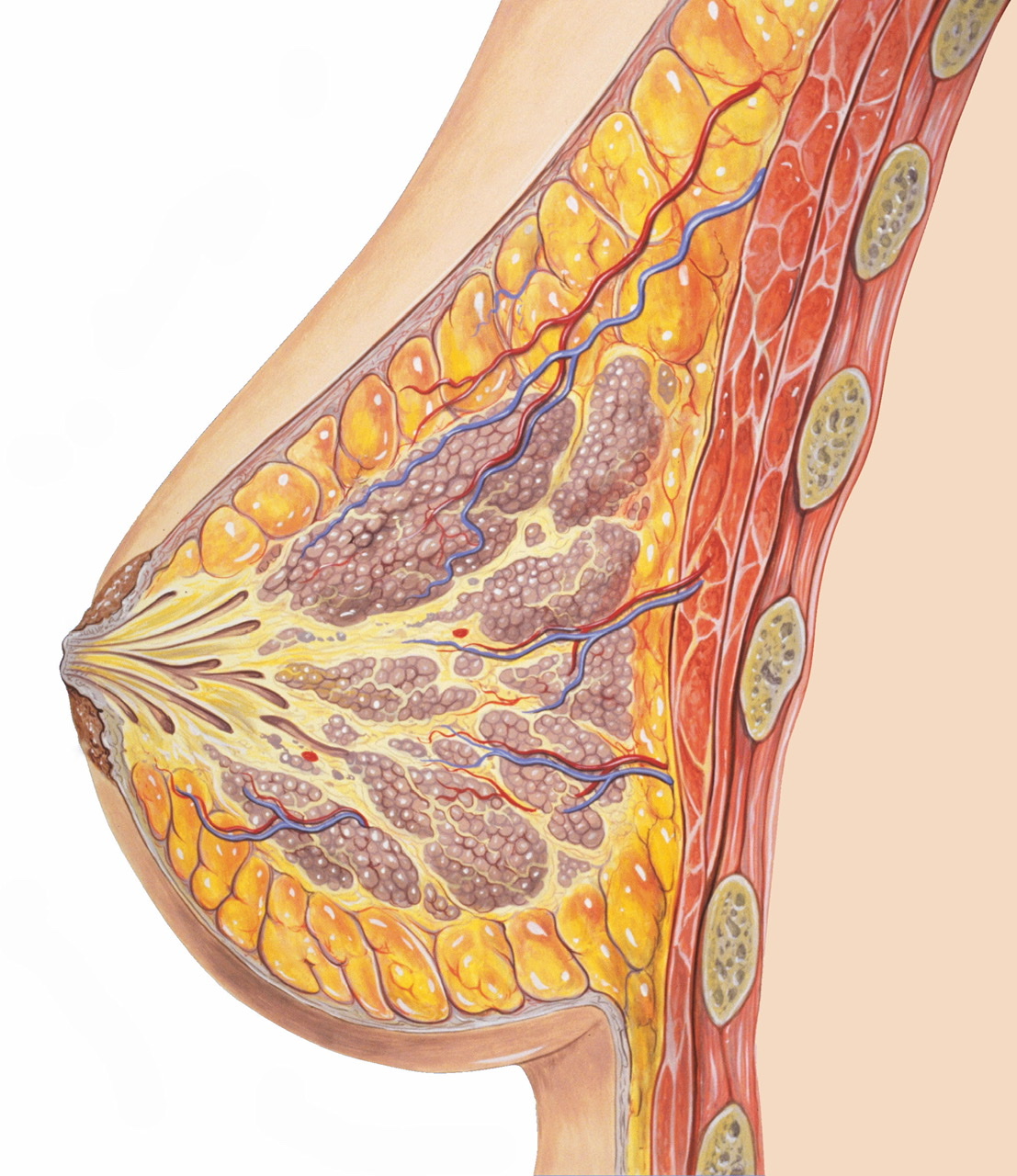 It is a modified gland of apocrine type, which is present in both the sexes, but is rudimentary in males and well developed in females after puberty. It forms an important accessory organ of the female reproductive system.

Q.2 What is the extent of female breasts?

Q.3 What is the situation of the breast?

Breast lies in the superficial fascia of the pectoral region except for axillary tail which pierces the deep fascia through the foramen of Langer and lies in the axilla.

Q.4 What is the shape of the breast?

Q.5 What are deep relations of breast?

Q.6 What is the structure of the breast?

– Nipple:
Cylindrical or conical projection directed superolaterally. It lies at the level of 4th intercostal space in nulliparous females.

– Areola:
The pigmented area around the nipple. Rose pink in virgins and dark brown or black after pregnancy. The nipple and the subareolar tissue contain smooth muscle but lack the fat.

– Montgomery’s tubercles:
These are sebaceous glands underlying the areolar skin and are called areolar glands. They enlarge during pregnancy and lactation and form raised tubercles. Oily secretions of these glands lubricate nipple and areola and prevent them from cracking during lactation.

Q.7 How does the structure of male breast differs from the female breast?

The male breast is rudimentary. It consist of small ducts without alveoli. There is little supporting fibrous tissue and fat.

Q.8 What is retro mammary space and what is its clinical significance?

Q.9 What is the clinical significance of the retraction of nipple?

Q.10 What is the clinical significance of the dimpling of the skin over breast?

This is due to the contraction of the ligaments of Cooper. It can occur in chronic infection, after trauma, or the breast carcinoma infiltrating the ligaments.

Q.11 What is the arterial supply of breast?

Breast is supplied by:

Q.12 What is the venous drainage of the breast?

Veins converge towards the base of nipple where they form an anastomotic venous circle, from where veins run in superficial and deep sets.

Q.13 What is the importance of knowing venous drainage of breast?

Q.14 What is the nerve supply of breasts?

Breast is supplied by anterior and lateral cutaneous branches of 4th to 6th intercostal nerves. Nerves do not control the secretion of milk. The nerves supplying the glandular tissue are sympathetic.

Q.15 What is lymphatic drainage of the breast?

– 20% drains into the internal mammary group, which drain the lymph not only from the medial quadrant but also from the lateral quadrant.

– The subareolar plexus of Sappy situated beneath the areola drains the nipple and areola and communicates with the lymphatics of parenchyma.

– Lymphatics from the deep surface pass through pectoralis major and clavipectoral fascia, to reach apical group of lymph nodes.

– Lymphatics from the lower and inner quadrants may communicate with subdiaphragmatic and subperitoneal lymph plexus, after crossing the costal margin and then piercing the anterior abdominal wall through the upper part of the linea alba. Thus, the carcinoma of breast may spread to the liver and can gravitate through the peritoneal cavity to lie on the pelvic organs, e.g. on ovary, when the condition is known as Krukenberg’s tumor.

Q.16 What is the lymphatic drainage of the axillary tail?

It drains into the scapular (anterior) axillary group.

Peau d’orange is due to cutaneous lymphatic edema. Where the infiltrated skin is tethered by the sweat ducts, it cannot swell. The characteristic appearance is like that of orange peel. It is a classical physical sign of advanced carcinoma of the breast. It is also seen over an abscess, particularly chronic abscess of the breast.

Q.18 How the carcinoma breast spreads to the vertebrae?

By spread through the veins.

Q.19 What is cancer of cuirass?

In it, there is persistent, non-pitting edema of the arm, and the affected side of the thoracic wall is studded with carcinomatous nodules and the skin is so infiltrated that it is like the coat of armor. The condition appears in cases where local recurrence after surgery of breast occurs.

Q.20 How does the breast develop?

The breast develops as an in evagination of the ectoderm of the ventral wall of the body. In the 6th week of intrauterine life, two longitudinal ectodermal thickening develop, one on each side called mammary ridge or milk ridge. This ridge extends from the axilla to the groin, but in the human embryo, it persists only in the pectoral region. Ingrowths from the milk ridge gives rise to the glandular tissue, the ducts and alveoli of breasts. The connective tissue supporting the glandular tissue is derived from the surrounding mesenchyme.

Q.21 What is polymastia (Supernumerary breast)?

This is a congenital anomaly in human in which there are more than one breast on one or both sides. This is due to the persistence of the milk ridge which normally disappears except in the pectoral region.

This is the presence of supernumerary nipples.

Q.23 What type of incisions is given to drain a breast abscess?

By a radial incision to avoid cutting across a number of lactiferous ducts.

Q.24 What is the extent of clavipectoral fascia?