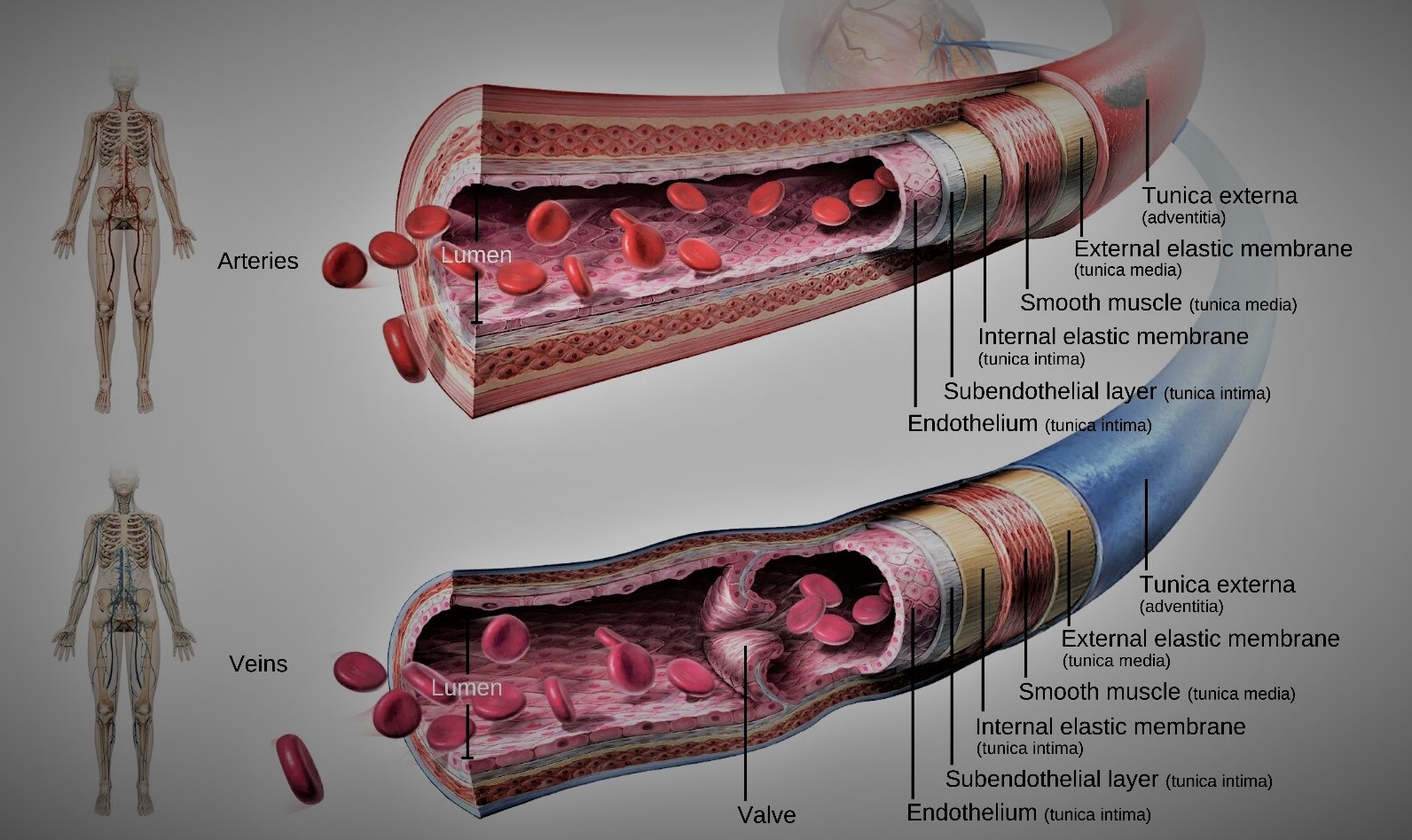 Importance of anastomosis:
• Allow an equalization of blood pressure over territories in which they are connected.
• Provide alternative channels of supply to a particular area.
• Provide equal distribution of blood
• Regulate temperature between the environment & body by adjusting the blood flow of the cutaneous bed.

End artery / No anastomosis
In a certain portion of the body, arteries don’t form any anastomosis with neighboring vessels called as end arteries.
No collateral circulation, only one route in the end artery.
Types of end artery
Significance of end artery
Occlusion of the central artery of retina leads to necrosis &  is followed by permanent blindness.
Any blockage of these arteries causes serious nutritional disturbance resulting in the death of the tissue supplied by the vessels (Describe as necrosis, infarction, or gangrene).

Anatomically, the right & left coronary arteries of the heart are not end arteries, they do anastomose with each other but functionally, they behave like end arteries because during occlusion of any one of these, another artery do supply the collateral circulation but this collateral supply is not enough to meet the oxygen & nutrients demand of the blocked area leading to myocardial infarction.

Large artery/ Elastic artery
• Main characteristics feature is composed of elastic fibers.
• Large artery is known for its elasticity.
• Contain an abundant amount of elastic fibers.
Why abundant elastic fibers in large arteries?
Abundant elastic fibers are present for strength & elasticity needed to withstand the force by which heart pump blood, & prevent bursting of an artery.
When heart ejects the huge amount of blood with great pressure, large arteries have to stretch (increase) their lumen’s diameter for the accommodation of such a huge volume of blood & withstand the pressure.
Similarly between heart contraction, the elastic walls of large arteries recoil (contract to normal), so to continue the further pumping of blood to far distance even when ventricles are relaxed, to maintain blood pressure.
But even in ventricular relaxation, blood vessels exert pressure, why?
This is because due to the elastic recoil tendency of large arteries which further pump the accumulated blood present in their lumen during ventricular relaxation.
Thus diastolic blood pressure - results from the elastic recoil tendency of large arteries.
Blood vessel has the highest blood pressure when heart contract, & lowest when the heart relaxes and the variation in pressure produces a pulse, which can only be felt in arteries.
Large arteries are found nearly around the heart like
• Pulmonary artery
• Aorta
• Brachiocephalic trunk
• Carotid artery
• Subclavian artery

Medium-sized artery/ Muscular artery
Features
• Know for its thickest middle layer (tunica media) composed of an abundant amount of smooth muscle cells, so that they can contract & relax (dilate) as per the amount of blood needed.
• Supply to specific parts of the body according to which they are named after.
Example
- Brachial artery
- Radial artery
- Femoral artery
- Splenic artery
Note:
Histological layer of Muscular artery
Tunica adventitia (outer layer)
• Consists of connective tissue with collagen & elastic fibers
Tunica media (middle layer)
Consists of
• Huge circular layer of smooth muscle cells (spindle-shaped) for which medium-sized is known as muscular artery.
• Some elastic & collagen fibers
• External elastic lamina - which separate tunica media from the tunica adventitia
Tunica media (inner layer)
Consists of
• Inner endothelial lining of (simple squamous)
• Middle subendothelial layer of connective tissue
• Internal elastic lamina - composed of elastic fibers (which separate it from tunica media)
Difference between Large artery (elastic) & Medium-sized artery (muscular)
Note:
Atherosclerosis:
Atherosclerosis is the condition of hardening of arteries due to deposition of plaques inside the tunica intima.
Atheroma or plaque is mainly composed of cell debris containing lipids (cholesterols & fatty acid), and calcium for hardening.
Long term persisting diabetes mellitus (high blood sugar), cholesterols, high blood pressure, stress & smoking, all are involved in damaging endothelium of arteries leading to atherosclerosis.
Atherosclerosis is characterized by progressive inflammation of the walls of arteries.
Initially, when there is damage in the endothelial lining of blood vessels, accumulation of WBC (especially macrophages) occurs which takes up a huge amount of oxidized Low-density lipoprotein (LDL)- bad cholesterol.
After the accumulation of high cholesterol content, macrophages now called as foam cells.
These formed plaques later calcified making stiffness (hardness) to arteries.
Veins are not subjected to develop atheroma/ plaques as veins do not have the same hemodynamic pressure as arteries.
Thrombosis
Formation of the blood clot inside the blood vessel making obstruction to blood flow is called thrombosis.
Embolism is the formation of a piece of loose clot (called an embolus) that travels around through your blood circulation and could occlude the vessels of certain organs.
Example:
• Ischemic stroke (in brain)

Arteries & arterioles have thicker walls than veins & venules because they are closer to heart & receive blood that is surging at far greater pressure.

Capillary
Capillaries are simple microscopic vessels, endothelial tubes that connect the arterial end & venous sides of the circulation.
Features of capillary:
• Has no smooth muscles - so no contraction/relaxation
• Only one layer i.e tunica intima & underlying basal lamina
• No tunica media & tunica adventitia
Sites where capillaries are absent
Capillaries supply almost every cell, except for
• Epithelial cells resting on the basement membrane
• The epidermis of skin, hair & nails
• Cornea of eye
• Cartilage
These structures have no direct blood supply.

Note:
Classification of capillary
1. Continuous capillary:
Continuous capillaries of nervous tissue is so special that its permeability is highly selective. The endothelial lining with tight junction forms the Blood-Brain Barrier (BBB). Due to this, even drugs cannot bypass this barrier. So its highly complicated to treat brain patients by use of drugs.

2. Fenestrated capillary
3. Sinusoidal capillary / Discontinuous capillary
Function of capillary
• Transfer of O2 & other nutrients from blood to tissues.
• Transfer of Co2 & metabolic waste products from tissues to the blood.
Normally plasma protein cannot cross the wall of capillaries. In certain pathological conditions, plasma protein can cross the capillary wall into the interstitial space decreasing the osmotic colloidal pressure within blood vessels and increasing the osmotic colloidal pressure around the interstitial space draining wall into the space from blood vessels causing edema.
Thus, the main function of plasma protein is to maintain osmotic colloidal pressure within the blood vessels to preserve/hold the water content for maintaining blood volume.
However physiologically, protein & RBC can cross the wall of sinusoid capillaries.
• In liver - plasma protein can cross and drain in blood vessels.
• In Red-bone marrow - RBC can cross
These above illustrate the importance of the presence of discontinuous capillary over those structures.
Difference between capillaries & sinusoid
Veins
Veins are vessels that collect & bring deoxygenated blood from the capillary networks to heart except pulmonary veins.
• Have all three layers but thinner walls with larger lumen compared to corresponding arteries.
• Large lumen & thin walls make veins good storage vessels so-called as capacitance vessels (blood reservoirs) because they contain up to 65% of blood supply.
Classification
• Venules
• Small to medium-sized veins
• Large veins
Histological structure of vein
Tunica adventitia (outer connective tissue coat)
• Thicker than tunica media & form 2/3rd of the thickness of the wall of the vein
Composed of:
• Dense connective tissue
• Collagen fiber but much less elastic fibers with few muscles
Tunica media (middle muscular coat)
• Thinner than tunica adventitia
• Composed of circular arranged smooth muscle cells
Tunica intima (Inner endothelial coat)
Consists of:
• Endothelium with its basement membrane
• Internal elastic lamina is not distinct
Summary:
Tunica media is thin, but tunica adventitia is thicker.
The lumen of the vein is quite bigger & collapsable as compared to their thickness.
But in the artery,
• Tunica media is thicker than tunica adventitia
• The lumen of the artery is small & patent (non-collapsing) as compared to their thickness