Benefit of Grounding or Earthing Mat 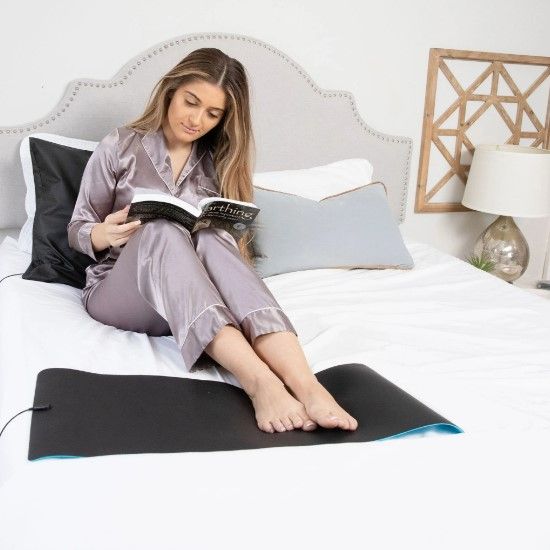 Benefit of Grounding or Earthing Mat

In our modern, industrialized culture, we all understand the advantages of wearing shoes, but have you ever wondered what it would be like to go without them? Reflect on it Our ancestors used to travel the entire planet barefoot. In fact, they slept on the ground. Nowadays, the majority of us own at least a few pairs of shoes. Our fashion and wardrobes now include shoes just as much as clothing.

However, there's something incredibly tranquil about strolling barefoot in a field of lush grass or on the seashore. How come? Our electrical bodies interact with the earth's electrical field as we walk barefoot on it. We take in free electrons from the earth through our bare soles, which function as antioxidants in the body.

The act of placing our bodies in close proximity to the earth's surface is referred to as "earthing" or "grounding."

Imagine the earth as a massive battery. Although it has a slight negative charge, our bodies accumulate a positive charge with time, especially in our modern world. Free radicals, the source of inflammation, are also created by our bodies. Things might get a little out of control when we consume too much in our bodies. By regularly connecting to the earth, one can feed the body with electrons to balance this charge. Our bodies can regain equilibrium by absorbing the electrons in the form of negative ions.

In his book Earthing: The Most Important Health Discovery Ever! and the documentary The Earthing Movie, Clint Ober introduced the idea of earthing. Ober contends that the most harmful creation ever created by humans is the shoe. He also asserts that using earthing allowed him to fully recover. It's difficult not to wonder if he's onto something now that diseases linked to inflammation are becoming more prevalent. Could our shoes be doing us harm? Believe me.

I confess that I had some reservations.

The leading cause of death in America is heart disease, which is known as a "silent inflammation." Even just that figure should worry us. What does it matter whether the idea of "earthing" is true? Would more time spent outside, in the sunshine, and surrounded by nature even be harmful?

But it's simpler said than done. especially for people who reside in big cities. However, after learning about earthing mats, I felt I had to give it a shot. Earthing mats function similarly to earthing but require additional hardware. The ground port of an electrical outlet is where these mats are connected. The mats feature a conductive top layer and are carbon-infused. The connection will be established once the cord has been linked from the mat to the outlet. You are now grounded as a result!

Grounding is legitimate, according to research. Amazing health advantages can be had by grounding, and it's free! Reduced anxiety and depressive symptoms, reduced pain, enhanced immunological and cardiovascular systems, and greater sleep are all benefits of connecting with the soil. Another incredible advantage of grounding? The body enters a sympathetic (fight or flight) mode when grounded, and it exits a parasympathetic (relaxed) condition. The sole prerequisite? Leave the house and stroll barefoot.

Grounding Controls Sleep Cycles in Us

Getting grounded also aids in getting enough sleep. Many people struggle to get to sleep and stay asleep, and a major contributing factor is the stress of modern life. The market for sleep medications and sleep aids is booming. The negative electrons from the earth assist determine our circadian rhythm, or sleep cycle, which instructs our body when to release particular chemicals like cortisol and melatonin at the proper times.

In one study, grounding resulted in discernible reductions in diurnal cortisol patterns, with cortisol levels considerably falling during nighttime sleep. In addition to lowering cortisol, grounding during sleeping caused the participant's hormone secretions to resynchronize with a more regular 24-hour circadian rhythm. Additionally, the participants reported less discomfort and stress! Use of grounding mats or sheets in conjunction with your bed is a fantastic technique to ground at night.

Grounding has the wonderful effect of lowering cortisol, which improves sleep quality and mood.

It has also been demonstrated that the electrons from the ground can reduce the effects of free radicals and strengthen our immune system. In addition to wearing animal skins or walking barefoot—both of which allow the earth's electrons to pass through—our ancestors frequently slept on the ground. All of our organs, tissues, and cells are stabilized and free radicals are neutralized as a result of this interaction with the soil while we sleep.

Grounding Promotes the Health of Our Heart

The fundamental regulator of the endocrine and neural systems may be grounding the body. A biofeedback device captured the electrophysiological and physiological data of 30 healthy control volunteers during a double-blind pilot trial. About half of the individuals displayed a dramatic shift in EEG after being grounded. The participant's brains and musculature's electrical characteristics improved as a result of the grounding. Immediately after being grounded, there were overall decreases in stress and tension as well as a change in the autonomic nervous system. Along with enhancing cardiovascular health, grounding decreased heart rate variability. This improvement persisted during the entire 40-minute time of grounding. This shows that when earthing duration is increased, the advantage of heart rate variability grows.

Being grounded calms us

Grounding may be a very effective treatment for people who feel anxiety, emotional stress, panic, terror, and/or symptoms of autonomic dystonia, such as headaches, heart palpitations, and dizziness. Most likely, these patients will have beneficial benefits in 20 to 30 minutes, and virtually often, in 40 minutes. Heart rate variability is impacted by the symptoms of anxiety and depression, including panic, sadness, aggression, and others. Cardiovascular illness and anxiety and depression are related. By harmonizing the autonomic nervous system and bringing the body into a parasympathetic or calm state, earthing aids in reducing depression and the risk of cardiovascular events in depressed individuals with cardiovascular disease.

Mineral and electrolyte levels in blood serum significantly changed (in just one night!) after connecting with the ground. Osteoporosis was directly linked to the calcium and phosphorus decreases that were noticed. Some early signs of osteoporosis can be reduced with just one night of grounding.

The benefits of earth connection for thyroid health are also encouraging! Thyroid-stimulating hormones significantly drop after one night of grounding. Many people who use thyroid medication discovered that going off their prescription actually made their hyperthyroid symptoms worse, so they had to work with their doctor to decrease their medication. The thyroid is the main gland responsible for controlling all bodily physiological functions. Our endocrine system's health may primarily be influenced by earthing.

In pilot research, participants' delayed muscular soreness (DOMS) was reduced by earthing. In another experiment, 20- to 23-year-old healthy men underwent a similar set of toe raises while carrying a barbell that was one-third of their body weight on their shoulders. Half of the individuals were grounded while their blood chemistry and pain thresholds were assessed. The findings of the study showed that the body's ability to anchor itself to the Earth affects measures of immune system activity and discomfort. At the time when DOMS is thought to reach its climax, the ungrounded participants showed a significant increase in white blood cells (associated with a reduced inflammatory response) and a stronger impression of discomfort. However, the white blood cell count in the grounded men dropped just slightly, indicating minimal inflammation and a quicker recovery. We may therefore heal from our body's natural reaction to muscular stress more quickly just by being grounded to the soil!

Our general physical and mental health can greatly benefit from spending even a half-hour each day outside and interacting with the land! And there is no expense involved. For those who live in colder climates, it is true that getting outside and on the ground during the colder months is more challenging. There are, however, conductive shoes specifically designed to be worn outside. Animal skin moccasins, like those worn by our forefathers, are likewise kind to the earth's electrons, in contrast to synthetic factory-made footwear. Consequently, venture outside to play, run around barefoot, work outside when you can, and sleep on the ground. You'll feel better the more you accomplish. Happy earthing and healthy living!

Is the investment worthwhile?

Yes! I can tell that I've observed a difference after using these mats night and day for more than a month. My slumber began to deepen, as though I had been more at ease all night. I observe that I can work on my computer for longer stretches of time without getting tired. Overall, I feel more at ease—or, if you prefer, "grounded." That emotion, in my opinion, has helped me feel more profoundly connected to my personal yoga and meditation routine. When I come into contact with the mats, I have an intuitive sense that I am deeply connected to this sustaining energy. I experience the same thing when I'm lying on grass. Indeed, the environment sustains us.

Overall, earthing outside is the best option. However, having the choice to do both offers me flexibility and advantages that are easier to obtain. It gives me comfort to know that I may remain indoors and still reap the health advantages, especially during times when outdoor activities is restricted (due to bad weather, government lockdowns, etc.). If purchasing an earthing mat is out of your price range, make an effort to spend as much time outside as you can. Connect to the earth, whether it is grass, dirt, soil, or sand, by taking off your shoes and socks. Enjoy some sunshine and pay attention to how the ground feels under your soles. What harm is there, really?