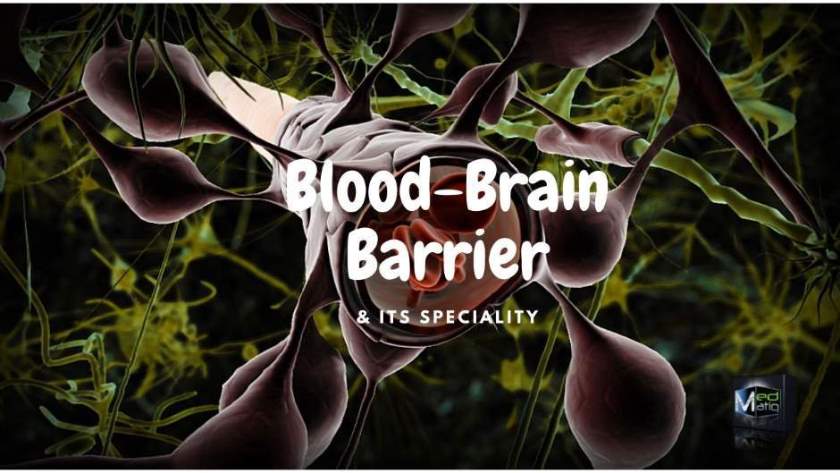 12 months ago 814
Two barriers mainly exist within the brain & spinal cord i.e
• Blood-brain barrier
• Blood-CSF barrier
But remember there is no CSF- brain barrier. Components of CSF can easily enter into the neural tissues.

The blood-CSF barrier means the barrier between blood and CSF.
Capillaries within the choroid plexus forms the CSF from the ultrafiltration of plasma of blood.
Here the endothelial cells of blood vessel does not doesn’t have tight junction like that of Blood-Brain Barrier. But the choroid plexus is surrounded by specialized ependymal cells having tight junction within them which truly act as a barrier between the blood & CSF so-called as Blood CSF barrier.

In simple word,
Blood CSF Barrier is the barrier between CSF & blood capillaries of choroid plexus created by the specialized ependymal cells (surrounding the ventricles of the brain).

The blood-brain barrier is noting but the partition created by the endothelial lining of blood vessels around the CNS with its unique features. This barrier is not like those physical barriers.

The endothelial cells of blood vessels supply the CNS are so designed that high size molecules, high polarity molecules and other toxin substances cannot cross the barrier.

Formation of blood-brain barrier (Components of Blood-Brain Barrier)
Blood-Brain Barrier is formed by
• Endothelial cells of blood vessels with the tight junction between them, which make them unique from other blood vessels.
• Continous Basement membrane of endothelial cells
• Partial covered by pericytes
• Foot process of astrocyte
The main important thing which forms Blood-Brain Barrier (BBB) is continuous basement membrane and continuous endothelial cells with tight junction within them which makes it very unique. Other structures like astrocytes are needed for the maintenance of the Blood-Brain Barrier.
The blood-brain barrier is so much powerful and well managed that, even if you inject blue dye into the mouse, it easily passes into other tissue rather than the brain, which can be clearly illustrated by the following picture.

Similarly, unusual substances from the blood enter into the neural tissue. Protein (large molecules) also get into the tissue, increasing the osmotic pressure within the neural tissue. This is followed by water, leading to swelling & causes edema. Such edema is called vasogenic edema of the brain as edema occurs due to vascular process.

Extra fluid gets into the brain causing swelling & many more immune cells can get into the brain which can also read to auto-immune diseases. When immune cells get wrongly programmed, then instead of attacking the infection, they start to attack the part of your own tissues.
Kernicterus:
Similarly, in the case of infants, the Blood-Brain Barrier is not so well developed. And infants have a relatively high concentration of hemoglobin than adults. Fetal RBC usually gets destroy fast leading to an increase in no. of breakdowns of hemoglobins which leads to an increase in the concentration of free bilirubin.
Bilirubin is the catabolic breakdown product of hemoglobin. Free bilirubin is highly toxic & water-insoluble so it needed to bind with albumin (plasma protein) to be transported through the blood to the liver for its conjunction.
Usually, bilirubin is transported to the liver by plasma protein albumin. But due to excessive breakdown of fetal hemoglobin (HbF) leading to excessive formation of bilirubin but all these bilirubin could not be bounded with plasma protein.
These free bilirubin (not albumin bounded) can easily cross the immature Blood-Brain Barrier & penetrate the lipid-rich basal ganglia because of its lipid solubility and deposited here. Yellow coloring of basal ganglia & cerebral cortex occurs leading to damage to basal ganglia. This leads to clinical conditions called kernicterus.
Thus, kernicterus is the clinical condition characterized by the deposition of unconjugated bilirubin in basal ganglia. Infants are more prone to this, due to the immaturity of the Blood-Brain Barrier.