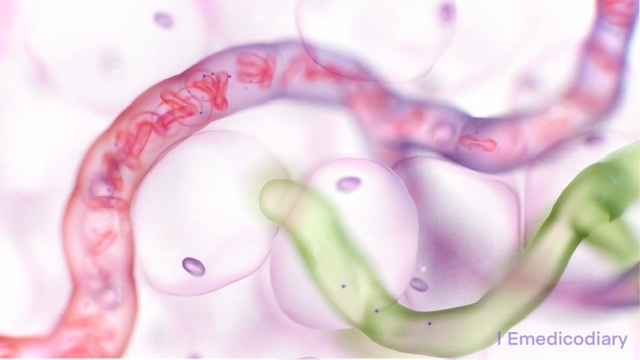 As the arterial blood flow through the capillaries, to deliver nutrient and oxygen to cells of the body, due to pressure gradient between the capillaries and interstitial space, blood plasma, small protein, and nutrients move out into the surrounding tissue, where it becomes interstitial fluid. After nutrients are delivered to the cell, waste products are then push back into the venous circulation.

Two types of pressure are exerted both in interstitial fluid & inside the blood vessels.

Due to pressure dynamic, at the arterial end, net filtration pressure is plus 10mm of mercury which denotes fluid from the vessel is seeping out into interstitial space. Similarly, at the venous end, net filtration pressure is minus 9mm of mercury, which means, interstitial fluid is being reabsorbed into the vessel.
Around 20 liters per day of blood plasma, move out of the arterial end of the capillary. But only 17 liters per day of filtered plasma is reabsorbed at the venous end. While the remaining 3 liters per day of fluid is left as interstitial fluid. If these fluids get accumulated in excess, then it leads to edema.
Thus, the lymphatic system comes into play, where this remaining interstitial fluid is drained into porous, blunt-ended lymphatic capillaries, where it is now referred to as lymph.
Unlike the blood circulation system, which is a closed-loop, the lymphatic system is a one-direction open-ended network of vessels. Lymphatic capillaries are the blind sac tube, made up of overlapping endothelial cells, which form flap-like valves that only open in one direction.
When the interstitial pressure increases, pushes the flaps inward, opening the gaps between the cells, allowing fluid to flow in. As the pressure inside the capillary increases, the endothelial cells are pushed outward, closing the gaps, thus preventing the backflow.
Factors responsible for lymph flow are same as that of in the vein.

Components of the lymphatic system are

2. Lymphoid organs are comprised of
Primary lymphoid organs and secondary lymphoid organs. Bone marrow and the Thymus are the primary lymphoid organs as the formation and maturation of T and B lymphocytes occurs here. Secondary lymphoid organs are spleen, lymph nodes, Appendix, Tonsil, Solitary lymphoid follicle, and Payer's patches of the ileum.
3. Lymphoid cells
Lymph circulation Interstitial fluid is first drained into the lymph capillaries, lymph vessels, and then from the afferent lymph vessels, it passes to the sub-capsular sinus and trabecular sinus of the lymph node. The lymph node filters the lymph. Then lymph flow from the hilum to efferent lymph vessels which ultimately drained into either the lymphatic trunk or directly into Terminal ducts.
The thoracic duct is the largest lymphatic vessel allowing the return of lymph from most parts of the body, except the right upper quadrant of the body, which is drained by the right lymphatic duct. The thoracic duct originates from the cisterna chyli, at the level of the 12th Thoracic vertebra, to the junction of the left internal jugular and left subclavian vein.
The gaps between overlapping endothelial cells are larger in lymph capillaries than in blood capillaries. Thus, it will allow passing bacteria, immune cells like macrophages, cellular waste products & other larger particles like fat.
The lymphatic system is the route of the transport of fat from the gastrointestinal tract.
Fat is breakdown into fatty acid, which is absorbed by the intestinal epithelium. Within the epithelium, it gets packaged with chylomicron & transported to lymph capillaries called a lacteal. The lymph in the lacteal has a milky appearance due to its high-fat content and is called chyle.
Clinical correlation of the lymphatic system

Cancer cells break away from where they begin, (the primary tumor) and travel through the lymphatic system or blood to other parts of the body is called metastasis.