How To Diagnose Coronavirus In Lab - Emedicodiary 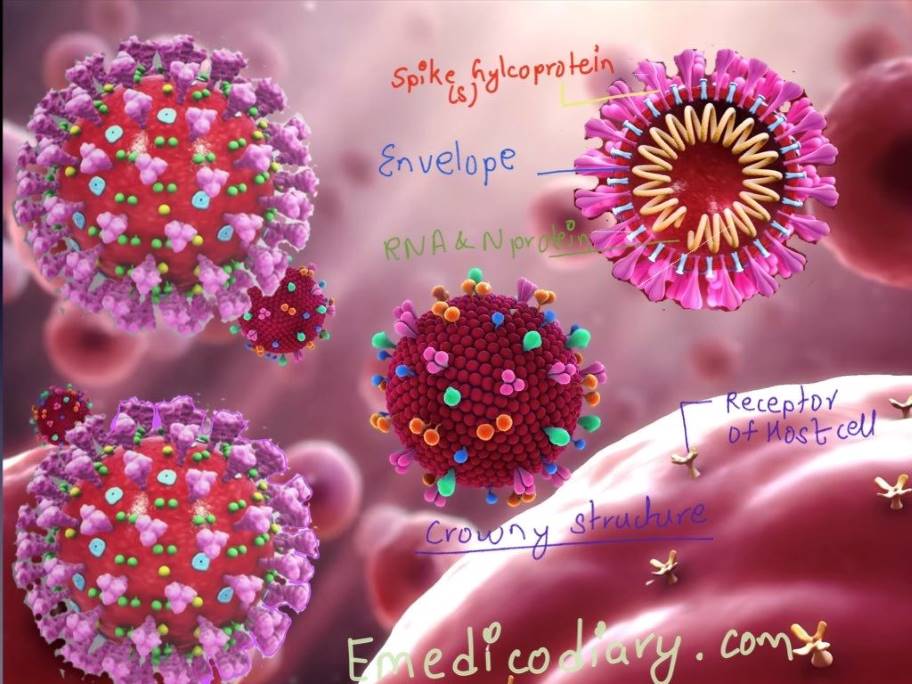 How coronavirus is diagnosed in a lab?

Up to the date, the only method for diagnosis of coronavirus is real-time PCR/ Quantitative (qPCR) and Reverse Transcription (RT-PCR).

What is PCR? And what’s its difference with real-time PCR?

Real-time PCR is similar to that of commonly used PCR. The only difference is Real-time PCR is provided with a fluorescent-tagged nucleic acid probe (single strained oligonucleotide) which measures the amount of amplified product in real-time.

PCR is the amplification (cloning) process of certain target DNA; making large amounts of identical copies of specific DNA fragments.
Similarly, the process of measuring no. of those produced copies of DNA in terms of emitted light intensity by fluorescent molecules of DNA probe is called real-time PCR
Requirement of PCR

1) Target DNA - which needs to amplify.

--Temperature raised up to 95*C
-- Raise in temperature — causes double-stranded DNA to melt.
-- Melting occurs due to the break down of H-bond between purines and pyrimidine bases.
-- Temperature lowered to 50-60*C
-- When the temperature is lowered, specific constructed primers complementary to the flanking sequence of DNA strands bind to a sequence.
-- A large amount of primer ensures the binding of the primer to the DNA strand.
-- Primer acts an initiator for DNA elongation
-- Temperature raised to 72*C
-- Then, Taq DNA polymerase keeps adding new dNTPs complementary to the template DNA strands.
Now, to detect the generation of new amplifies in real-time, the PCR reaction requires an additional ingredient- a single-stranded DNA probe(with fluorescent molecule)— designed to hybridize to the part of DNA sequence synthesized between the two primers.
Structure of DNA probes and its Mechanism of working.

DNA probes are radiolabeled or fluorescent-tagged single-stranded oligonucleotides made of 20-30 nucleotides used to detect target DNA.

-- One nucleotide in the terminal end is labeled with fluorescent molecule— which illuminates light
-- Another nucleotide on another terminal end is labeled with Quencher tag— which rapidly absorbs any light emitted by the fluorescent molecule as long as it remains close to fluorescent molecules.
-- Primers bind to the separate strands of DNA. The probe also finds its complementary site between them.
The DNA polymerase (an enzyme) synthesis a new DNA strand from the ends of primers also has a second activity; an exonuclease activity.
So, when it encounters double-stranded DNA in its path, it will disassemble the nucleotide of a strand that is in its way of elongation and replace them by another nucleotide.
As DNA polymerase passes through the probe, the nucleotide bearing the fluorescent marker and the one bearing the Quencher are separated from one another.
That is Probes (composed of nucleotides), are replaced by nucleotides that are being added by Tad-DNA Polymerasewhich leads to dissemble of DNA probes.
In the absence of nearby Quencher molecule, the fluorescent molecule can now emit detectable light when stimulated by hv- rays.
This process ensures that if noPCR takes place, then no light will be available to detect by the PCR machine as Quencher tag readily absorb the light.
In case, PCR takes place DNA polymerase to disassociate the nucleotide of DNA probes resulting in separation of Fluorescent and Quencher molecule. Thus this separation ensures that now Quencher molecule can no longer absorb the light from fluorescent molecule making test result to positive.
But are those processes enough for a virus to detect?
Probably not; virus contains single-stranded RNA. But PCR needs double-stranded DNA.
Thus for detection of the virus, an additional process is needed; this is reserve transcription process in which DNA is synthesized from RNA template catalyzed by Reserve Transcriptase (which is an RNA dependent DNA polymerase)
The new DNA strand synthesized has a base sequence complementary to the base sequence of the RNA template. So it is called complementary DNA (cDNA).
Now that RNA template used to make complementary DNA is degraded by ribonuclease-H leaving only single-stranded DNA which now acts as a template for synthesis of its complementary DNA strand to make double-stranded DNA.
Now, this newly formed DNA from RNA virus is now can be used in PCR for virus genome detection.
Detection For Corona Virus
1. Collection of sample
As coronavirus related to respiratory disease, using a sterile long stick (like earbud), trainee medical worker swabs inside of your nose or back of the throat; this aiming to collect materials
that have recently been in your lungs, where the virus is believed to replicate.

3. Addition of reverse transcriptase enzyme for converting to DNA from single-strand RNA

4. Then DNA added to the test tube containing a mixture of Primers, the large amount of isolated all 4 loose nucleotides, Taq-DNA polymerase, buffer, Mg++ ion and DNA probes labeled with a fluorescent molecule.

5. These mixtures are placed in the PCR machine; which has a thermal cycle for regulating temperature for amplification of target DNA.

7. When there is a presence of target DNA, according to which primer and DNA probes are synthesized, these bind with strands of target DNA.

8. Then DNA polymerase destroys the DNA probes releasing fluorescent molecules from Quencher molecules of DNA probe. Thus, when fluorescent molecules are stimulated by hv rays, enough light is emitted. Increase number of PCR cycle ensure insure amounts of light increasing light intensity to be measured by PCR machine denoting the result for the presence of the virus.

If no virus, it means the absence of target DNA. Thus no destruction of DNA probes, resulting in the failure of separation of fluorescent molecules from the Quencher molecule.